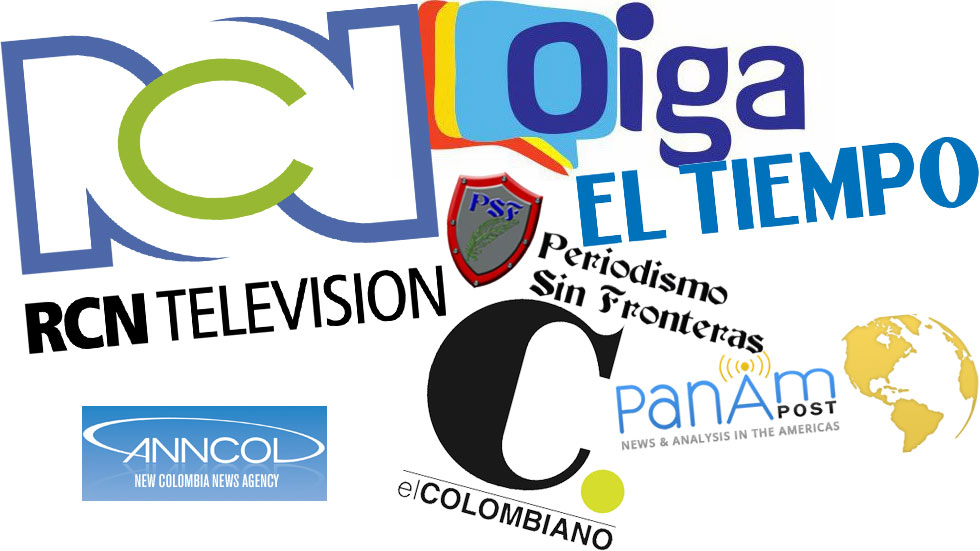 While “fake news” went relatively unnoticed in the US and Europe until last year, Colombia has been spoon-fed disinformation for a century. With the help of our readers, we compiled a list of the worst offenders in Colombian journalism.

The sad part of this is that four on our list of five news outlets are among the country’s most influential, meaning Colombians hardly have access to accurate, verified information that does not serve the agenda of either corrupt politicians or equally corrupt corporations.

Consequently, a recent linguistics study showed, Colombians have a severely distorted view of the reality in their country, particularly when it comes to the country’s 53-year-long armed conflict.

Canal RCN is the country’s second largest of two national television stations and is so dishonest its is even facing allegations of promoting terrorism.

The TV channel is owned by dodgy sugar tycoon Carlos Ardila Lulle and its news program is run by Claudia Gurisatti, both embroiled in allegations of sponsoring and promoting terrorism by paramilitary organization AUC, accusations expected to be investigated by a Truth Commission currently being set up as part of Colombia’s ongoing peace process.

The news station has fiercely opposed the country’s peace process, going as far as filing a criminal complaint after Colombian citizens — sick of being lied to by their politicians and media — began talking back at Gurisatti on Twitter, which the news director said was part of a “malevolent campaign” that “threatened her integrity.”

El Tiempo is currently owned by Colombia’s richest man, banking tycoon Luis Carlos Sarmiento. Before 2007 it was owned by the family of President Juan Manuel Santos, that sold it when the then-Defense Minister began planning his 2010 presidential run.

Former Caracol host Herbin Hoyos (R) spread the rumor that the French victim of a terrorist attack was the perpetrator of the attack that killed her.

While not as notoriously dishonest as its smaller competitor, Canal RCN, the news broadcast of Colombia’s largest TV network Canal Caracol has barely helped Colombians form an accurate picture of what is happening in their country, mainly by prioritizing trivia over the significant challenges faced by the country’s citizens.

One of its most recent embarrassment was in 2013 when a reporter of the station accused protesting farmers of being guerrillas. Dozens of protesters were killed during the massive agricultural strike.

Former news anchor Herbin Hoyos was long a respected journalist who bravely defended the rights of kidnapping victims. However, something went wrong during the peace process and he has used his popularity on Twitter to spread multiple falsehoods, including a conspiracy theory that blamed the French victim of a recent terrorism attack in Bogota of being the perpetrator of the attack that killed her while with her mother, who was injured in the explosion.

“Monumental march against Juan Manuel Santos and the narco-terrorists”

Periodismo Sin Fronteras (Journalism without Borders) is an extreme right website that is easily confused with Reporters without Borders, a global non-government press freedom organization.

The website has a history of defending convicted war criminals and corrupt politicians as long as they are loyal to hard-right former President Alvaro Uribe and extreme right former members of the Colombian military who were fired, more often than not on drug trafficking charges.

Contrary to evidence, the website also promoted the conspiracy theory that the French victim of the unsolved terrorist attack in Bogota of being a terrorist, a baseless theory widely condemned for re-victimizing surviving victims of the attack.

El Colombiano reported in 1933 that “the persecution of the Catholic faith begins.”

El Colombiano, together with El Tiempo, has been misinforming the public for more than a century.

The newspaper is owned by two families, the Hernandez family and the Gomez family, who printed entire speeches of Adolf Hitler years after the Nazi leader had begun the Holocaust that cost the lives of approximately 6 million Jews and continues to promote the fascistic political agenda of mainly the Gomez family.

The newspaper is widely read in Medellin and the surrounding Antioquia province in spite of the owning families’ implication in the promotion of fascism, embezzlement of state funds, and even a massacre.

While long falsely accused of being part of the now-disarmed FARC guerrilla group, the Swedish website did long serve as an outlet in which the FARC was allowed to justify or be apologetic about some of the guerrillas’ worst war crimes.

The Panampost is owned by Daniel Raisbeck, a self-proclaimed libertarian politician who has never been in politics or accepted as a libertarian. Raisbeck and his online platform played a key role in spreading the unsubstantiated conspiracy theory that the French victim of the Bogota bomb attack was a terrorist by interviewing John Marulanda, a former colonel and member of military lobby club Acore who was fired from the military, reportedly over drug trafficking allegations, who invented the conspiracy theory.