The alleged involvement of the prosecutor general in the bribery practices of Brazilian engineering firm Odebrecht are impeding an impartial investigation.

House of Representative Mauricio Toro asked Congress to reopen a criminal investigation into the chief prosecutor for failing to investigate the bribery practices he reportedly knew of before assuming office in 2016.

The House’s Accusations Committee is the only body that can investigate crimes committed by a prosecutor general, but is notoriously inactive and thus hardly a threat to Martinez.

Evidence has emerged over the past weeks that would prove Martinez knew in 2015 already that Odebrecht had been bribing government officials to acquire the ‘Ruta del Sol II” project. 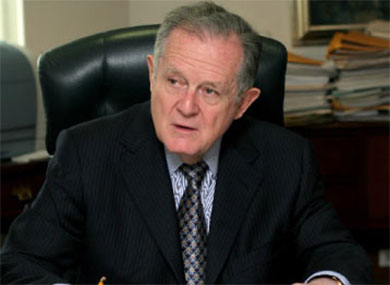 At the time, Martinez was the judicial adviser of Colombia’s richest man, Luis Carlos Sarmiento, the business partner of Odebrecht’s Colombian subsidiary.

The Supreme Court appointed him Prosecutor General in June 2016, but Martinez took no action against Odebrecht until after the US Department of Justice accused the Brazilians of corrupting officials throughout Latin America and Africa in December that year.

According to Toro, a house representative for the anti-corruption Green Alliance party, Martinez must be investigated for his his failure to investigate Odebrecht bribery’s practices now that new evidence of the chief prosecutor’s alleged criminal behavior has emerged.

The house absolved Martinez in May, claiming there was not enough evidence that would merit a criminal investigation.

Possible crimes committed when Martinez was “Sarmiento’s guy” can only be investigated by Martinez’ own office, which has been bogged down by inefficiency, corruption scandals, accusations of political persecution, and is now accused of conflicting interests.

The Prosecutor General said Tuesday that while he refused to resign from his post he did ask the Supreme Court to appoint a special prosecutor to investigate the Odebrecht scandal.

Such special prosecutor could investigate the scandal independent of Martinez office and, if the Supreme Court agrees, would have the powers to file criminal charges or, as Martinez put it, “dismiss speculations and doubts.”

The only problem is that in Colombian law there exists no such temporary investigate body. Congress would have to first introduce this to the country’s legislation and possibly the constitution.

Considering that multiple lawmakers and even President Ivan Duque have been implicated in the scandal, Martinez’ idea is hardly likely to materialize.

According to Martinez “there are many voices in Colombia that have told me: ‘prosecutor, you have promoted the most fierce and vehement fight against corruption in the country, do not falter’.”

It is unclear which voices the chief prosecutor is talking about. The only calls that have been heard publicly have been those demanding his resignation.