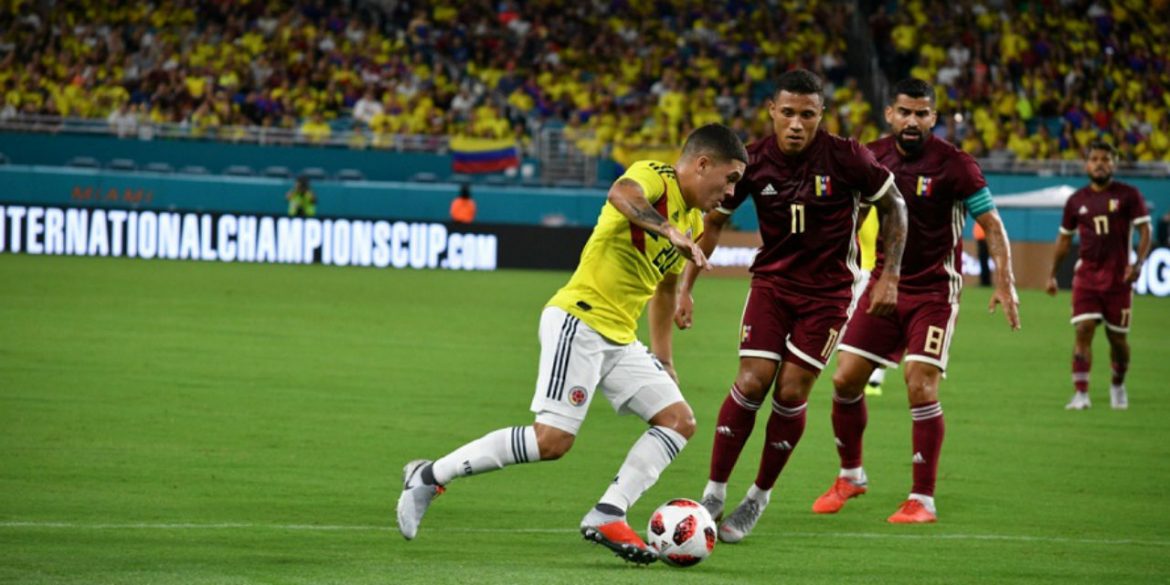 Colombia’s national football team on Friday secured a hard-fought 2-1 victory over neighbors Venezuela in an international friendly in Miami.

Second half goals from talisman Radamel Falcao and substitute Yimmy Charra were enough to cancel out a fourth minute opener by Venezuela’s Darwin Machis as the post-Jose Pekerman era began with a win.

Interim coach Arturo Reyes fielded a strong starting XI for the encounter at the Hard Rock Stadium with playmaker James Rodriguez and central defender Yerry Mina the only notable absentees from the squad that took part in the recent FIFA World Cup in Russia.

Mexico-based William Tesillo partnered Tottenham’s Davinson Sanchez at the heart of Colombia’s defense with Cristian Borja coming in at left-back in a new-look back four.

The adjusted defense was almost immediately caught out when Venezuelan striker Solomon Rondon got straight through on goal in the first minute from a long ball but failed to convert.

“El Vinotino” made a bright opening and had the ball in the net in the fourth minute when Italy-based Machis found himself unmarked at the back post to power home a deep cross from full-back Alexander Gonzalez.

Despite the early blow, Colombia took control of the game with midfielder Mateus Uribe going close in the 15th minute when he unleashed a powerful volley from a Santiago Arias cross, only to be denied by Wuilker Fariñez in the Venezuela goal.

Quintero continued to grow into the game and really began to exert his influence, creating opportunities for Carlos Bacca in the 21st minute and Falcao in the 27th but both failed to capitalize.

The former Independiente Medellin star again turned provider in the 32nd minute, playing a deft through ball for Juan Cuadrado, who just marginally failed to connect with a header as he beared down on Fariñez’ goal.

The Bogota-based goalkeeper saved Venezuela again in the 41st minute when Quintero whipped a free-kick in from the right but the inspired 20-year-old somehow managed to tip the ball over the crossbar.

Venezuela and Machis almost registered a second goal against the run of play in the 43rd minute when the Udinese star bent a shot in from the left, only to see it narrowly fly past the post and wide.

Despite dominating the opening half with 66% possession, “Los Cafeteros” failed to find a breakthrough and went into the half-time break trailing 1-0.

Colombia continued in the same vein after the break, dominating the exchanges and almost drew level in the 50th minute when Monaco striker Falcao got straight through on goal but Fariñez saved again from point-blank range.

“El Tigre” did however make the crucial breakthrough five minutes later when he slotted past the Millonarios ‘keeper after good work from his strike partner Carlos Bacca.

As Colombia continued to press forward, Venezuela relied on the counter-attack and almost re-established the lead in the 59th minute when substitute Ronaldo Vidal went close.

In what was a very open second half, Colombia’s Uribe almost scored in the 63 minute but his effort was saved by the in-form Fariñez before Ospina did likewise in the Colombian goal in the 79th to keep out a powerful Machis strike from outside the box.

Colombia coach Reyes rung the changes with the game entering the closing stages as Colombia piled on the pressure in search of a second and almost secured it in the 83rd minute but Glasgow Rangers’ striker Alfredo Morelos spurned a golden opportunity when it seemed easier to score.

Brazil-based Yimmy Charra had the final say however in the 89th minute when Venezuela’s resistance was finally broken as the attacking midfielder powered the ball home from close range after a scramble in the box for what was the decisive goal.

Colombia’s stand-in coach Reyes will be reasonably satisfied with the performance with his side displaying some of its trademark attacking flair that was at times sadly lacking during this year’s World Cup in Russia.

Colombia will face South American rivals Argentina on Tuesday as the rebuilding job continues following the departure of Pekerman after almost seven years.