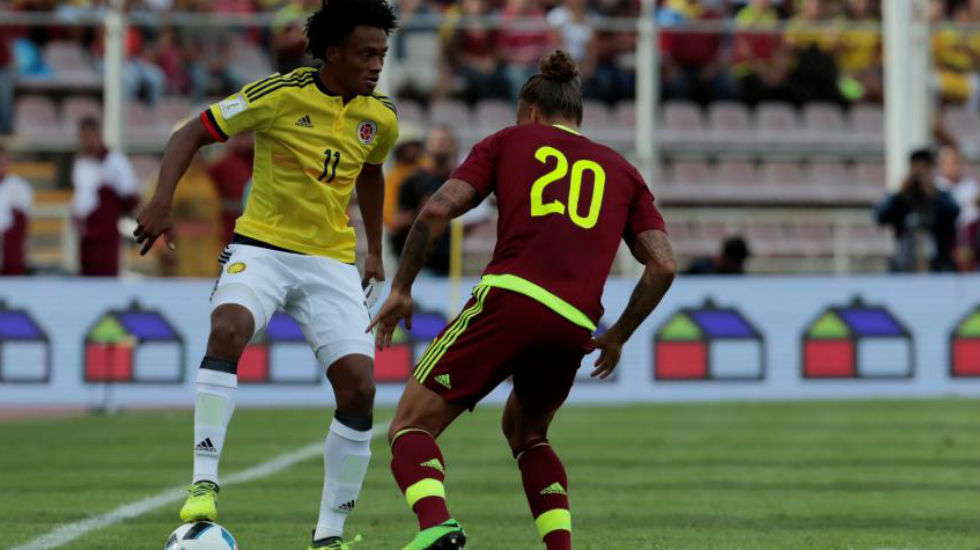 Colombia’s national soccer team was left frustrated by a determined Venezuela in Thursday’s World Cup qualifier as both sides played out a scoreless draw in San Cristobal.

An inspired performance by Venezuelan goalkeeper Wuilker Fariñez helped his side keep a first clean sheet at home since 2013 leaving Colombia with plenty to do in the final three World Cup qualifiers for Russia 2018.

The result means that “Los Cafeteros” remain in second place in the CONMEBOL South American section of qualifying but can be overtaken by both Uruguay and Chile should they win their respective games against Argentina and Paraguay.

Colombia coach Jose Pekerman opted for Junior Barranquilla’s Yimmi Chara to fill the void left by the injured James Rodriguez in a starting XI that was anchored by two defensive midfielders in Carlos Sanchez and Wilmar Barrios.

The opening minutes at the Estadio Pueblo Nuevo were frantic and lacked any real quality as both teams scrambled to gain a foothold in the middle of the field.

The game sprang into life however in the 30th minute when Boca Juniors’ Frank Fabra overlapped down the left wing to cross for Radamel Falcao who saw his powerful header kept out by Venezuela goalkeeper Fariñez at point-blank range.

The home side was unlucky not to take the lead four minutes later when a thunderous strike by Atlanta United FC’s Josef Martinez rebounded off David Ospina’s crossbar.

Colombia responded at the other end as the first half came to a close with defensive midfielder Carlos Sanchez going close from an Edwin Cardona corner in the 36th minute and Yimmi Chara testing Fariñez in the 38th.

Colombia started the second half with intent and almost scored in the first minute as a wonderful attacking move created a chance for Juventus star Juan Cuadrado. Again Fariñez was equal to the task as he managed to parry the wingers’ powerful shot.

Jose Pekerman introduced China-based Giovanni Moreno in the 62nd minute in place of the largely ineffective Edwin Cardona in an attempt to add more bite to the attack.

Perhaps “Los Cafeteros” best opportunity came in the 63rd minute when Chara cut in from the left-hand side only to blaze over as the goal beckoned.

Venezuela subsequently had a short period of dominance during which West Bromwich Albion striker Salomon Rondon was denied by a brilliant save from Opsina in the 70 minute before the Arsenal stopper kept out an effort from Romulo Otero in the 72nd.

Pekerman looked to the bench again with the introduction of Abel Alguilar and Luis Fernando Muriel in the closing stages but Colombia could not make the breakthrough to sneak a first win on Venezuelan soil since December 1996.

“La Vinotinto” coach Rafael Dudamel told reporters before the game that  “we are not only playing for three points, we are playing for pride” and this was clearly evident in his team’s performance.

While the Venezuelans made it incredibly difficult for their Colombian visitors, Jose Pekerman will be disappointed that his side did not do enough to secure all three points .

A home game in Barranquilla against leaders Brazil in five days time is now on the cards for Colombia followed by clashes with Paraguay and Peru as the quest to reach Russia 2018 looks set to go down to the wire.

Pekerman will certainly hope that captain and talisman James Rodriguez will recover in time to play a role against the “Canarinho,” as his side aims to qualify for back-to-back World Cups.