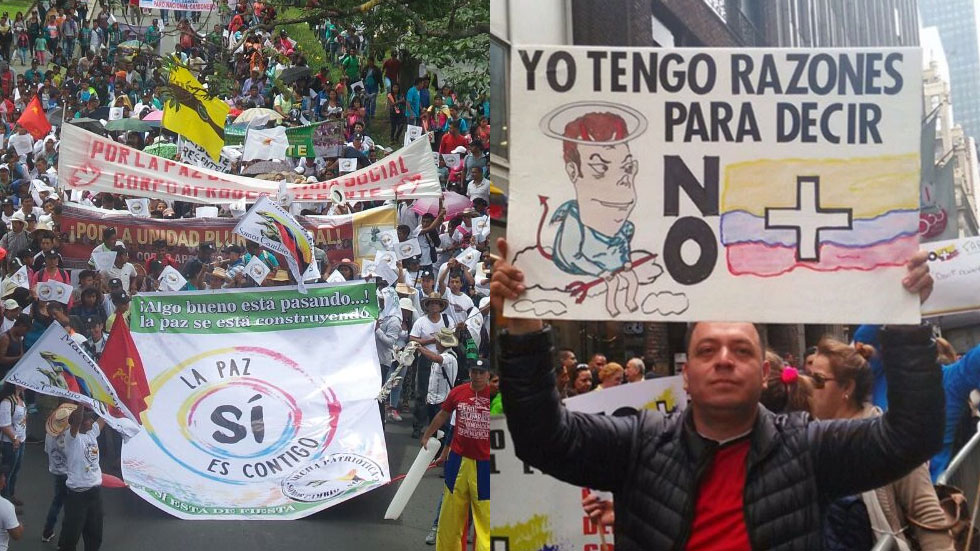 Colombia takes to the polls Sunday for a referendum in which the electorate is asked to either ratify or reject a peace deal between the state and the country’s largest leftist rebel group.

The stakes are exceptionally high as a “Yes” vote for the deal will mean the end of the country’s largest, oldest and most-feared rebel group and the beginning of a comprehensive, 10-year peace process.

A “No” vote would stop this process in its tracks without there being a Plan B.

Polling stations will open at 8AM local time and close eight hours later amid rigid security measures to prevent outbreaks of violence.

Sunday’s “vote will decide in what country we are going to live,” Peace Commissioner Sergio Jaramillo, one of the negotiators of the deal, told newspaper El Tiempo in an interview published Saturday.

The government coalition in Congress, the leftist opposition, and many dozens of victims and minority organizations have been urging a “Yes” vote, claiming it is a major leap towards peace in the country that’s been torn by political violence since the 1940s when the FARC was yet to be formed.

Illegal armed actors much smaller than the FARC have expressed their support for the guerrillas’ process. The smaller ELN guerrilla group declared a unilateral ceasefire for the duration of the electoral cycle and paramilitary successor group AGC has consistently supported the peace process. Both are trying to enter similar peace processes with the government.

This massive coalition is opposed by just one political party, the Democratic Center of former President Alvaro Uribe, who has claimed a “No” vote would result in the renegotiation of the pact that took five and a half years of negotiations already.

While Uribe’s campaign is likely to be unsuccessful according to the country’s pollsters, his objections in regards to leniency towards war criminals and the FARC’s political participation are broadly echoed in Colombian society, in particular among conservatives.

Additionally, Colombians have been bombarded by disinformation that have left many confused about the consequences of the vote or misinformed about the contents of the 297-page set of agreements.

More importantly, hackers have been increasingly active trying to sabotage the vote.

Earlier in the week, the National Registry website, which is responsible for the announcement of the results was attacked.

Also this website, Colombia Reports, came under attack on Saturday in an apparent attempt to shut down the website ahead or during the vote.

In spite of the uncertainty about the outcome of the vote, Colombian authorities, the United Nations and the FARC have already begun the process to effectively disarm the FARC and reintegrate its members.

Following the signing of peace on Monday and ahead of schedule, the FARC leadership handed in a list with the identities of guerrillas who are expected to demobilize.

Additionally, the government and the FARC for months have been working together in pilot projects seeking the removal of landmines and the substitution of coca crops with legal crops.

If the referendum turns out in favor of the peace deal, a series of political and rural reforms will take force to tackle what are widely considered the main causes of Colombia’s history of political violence.

If Colombians reject the deal, nobody knows what will happen.

Both the government and the FARC have said they have no Plan B for this scenario after more than five and a half years of talks.