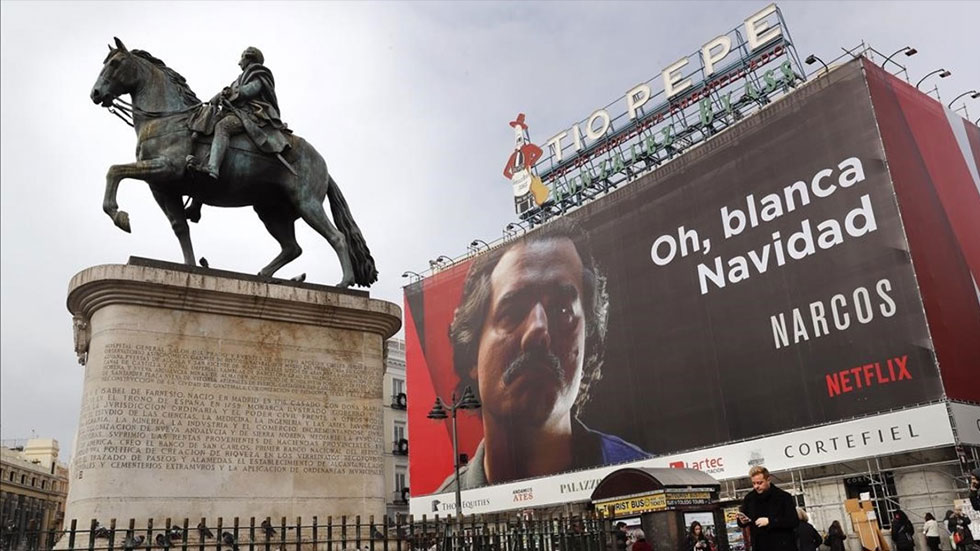 Colombia’s Foreign Minister called for the removal of a large banner promoting the popular Netflix series “Narcos” from a downtown Madrid plaza on Wednesday, but to no avail.

Maria Angela Holguin, who is touring Europe with President Juan Manuel Santos following his acceptance of the Nobel Peace Prize, was referring to a prominently displayed advertisement in the iconic Puerta del Sol, which reads, “Oh, White Christmas” next to a headshot of Wagner Moura, the actor who plays former drug lord Pablo Escobar.

According to Holguin, the Colombian embassy has contacted officials in the Spanish capital as well as Netflix, to remove the banner because it negatively affects Colombia’s image, reported newspaper El Espectador.

The drama series about slain drug lord is based on true events that happened in Colombia in the 1980s and 1990s.

Santos also weighed in on the issue during a radio interview while in Madrid.

“The series is very good, it’s had success all over the world. The thing is that Colombians lived this drama and we always suffer with that memory. It hurts us to be reminded of it,” he said.

“Escobar was an assassin who under no circumstances deserves to be exalted as a hero,” he added.

Santos meets with Netflix to discuss filming series in Colombia

Colombians living in Madrid started a Change.org petition demanding the banner be removed.

“It is demeaning that in the most emblematic place in Madrid, where thousands of people from all over the world pass through on a daily basis, Netflix has put up a poster of the Narcos series with an image of the actor who plays the bloodiest drug trafficker in Colombia with the text “Oh, White Christmas,” reads the petition.

A spokeswoman for the city of Madrid said that there are no plans to withdraw the banner since it does not violate any law or regulation, and the message’s subtlety prevents it from being considered a justification for drug use, reported El Tiempo.