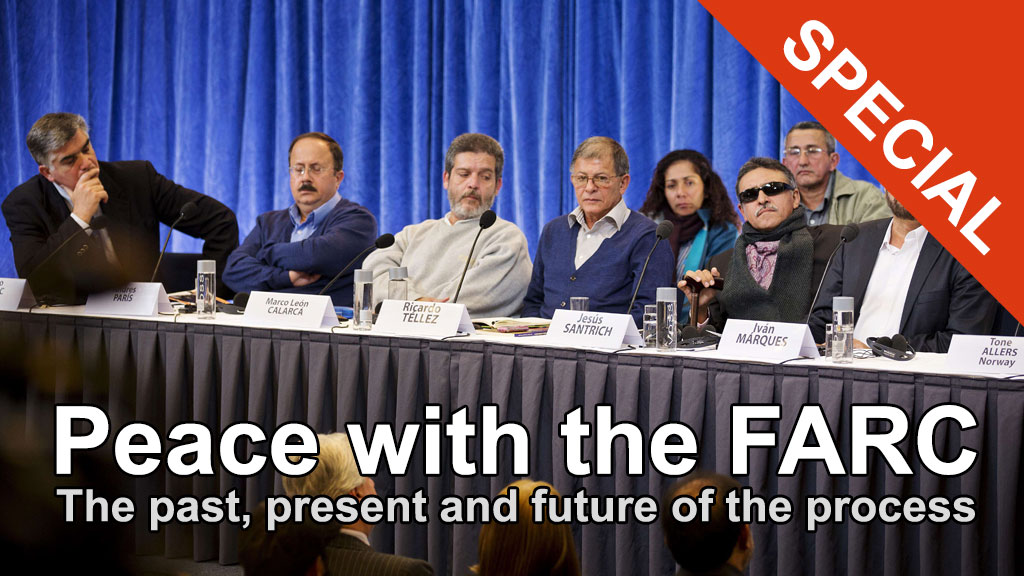 While Colombia’s ongoing peace talks did not start until three years ago, initial contact was made ten years ago by former President Alvaro Uribe already. Here’s how that went.

The accounts of the warring parties, and released and leaked documents, demonstrate that while the formal talks began on November 19, 2012, exploratory talks had been going on at least nine months before that, both parties have said.

According to leaked documents and sources, the initial intermediaries between the Uribe administration and the FARC leadership that established contact in 2006 were the same who later succeeded in solidifying the talks.

This article is part of Colombia Reports’ Peace with the FARC special. If you like our work, become a friend for $5 a month.

Colombia’s peace talks began in November 2012 to end an armed conflict between the Marxist Revolutionary Armed Forces of Colombia (FARC) and the government that erupted in 1964, but has roots in social and political conflicts dating back many decades.

The FARC began as a radical left-wing offshoot of the Liberal Party in the countryside that had abandoned their party, but transformed over the decades to become Latin America’s largest guerrilla army and a major drug trafficking organization.

Inspired by the Cuban revolution, 48 rebels armed themselves to resist the “National Front” (1958-1974), a division of power between the Liberal Party and the Conservative Party, designed to bring an end to the decade-long violence between the two known as ‘La Violencia’ (1948-1958).

However, as the rebels were a relatively obscure and small rural group, their impact on Colombian society was insignificant for the first decade.

With the introduction of coca cultivation and drug trafficking in Colombia in the 1970s, the FARC was able to grow its forces and fighting strength. The revenue from drug trafficking, kidnapping and extortion, however, did not just finance the FARC. Violent right-wing paramilitary groups also emerged with an increased level of violence as consequence.

These groups, joined by members of the military, began an extermination campaign of leftist thinkers, mainly those belonging to the Patriotic Union, a far-left political party formed in cooperation with the FARC after failed peace talks with President Belisario Betancur in 1985.

The extreme violence practiced by the guerrillas, the paramilitaries, the military and drug traffickers began to threaten the functioning of the state and, by the end of the 1990s, the country called in the help of the United States, which was fighting a war on drugs, and in particular, cocaine, which was largely produced in Colombia.

The power of the US military turned the tables on the battlefield; the FARC was decimated and pushed out of the cities and other economically important centers.

However, the military offensive against the guerrillas in the early 2000s resulted in more victimization than ever before, as the paramilitaries – in collaboration with corrupt politicians, businessmen and public officials – began a massive campaign of land theft, aggravating displacement to unprecedented levels.

Peace talks with the administration of former President Andres Pastrana that had begun in 1999 collapsed in 2002 after failed demilitarization attempts and a resurgence of guerrilla attacks.

The end of the AUC

Between 2003 and 2006, the paramilitary umbrella organization known as the United Self-Defense Forces of Colombia (AUC) demobilized and – while confessing to tens of thousands of war crimes – exposed extensive and profound ties to Colombia’s state entities, leading politicians and military brass.

During this period, the Colombian military’s apparent effectiveness began falling and in response, the army began killing civilians and presenting the murder victims as combat kills on a massive scale, a practice that would be come to be known as ‘false positives.’

The degeneration of what originally was merely a political conflict has turned both the guerrillas and the state into cold-blooded killers. The government estimates that at least 260,000 Colombians were killed in the 51-year-long conflict, while tens of thousands of disappeared are feared to be dead and over 6 million were internally displaced.

How the current talks began

In an attempt to negotiate an end to the violence, former President Alvaro Uribe made first contact with the FARC secretariat, the guerrillas’ political leadership, in 2006 through Henry Acosta, a Cali businessman who was a personal friend of the FARC’s Western Front commander, “Pablo Catatumbo.”

A second negotiator, Swiss scholar Jean Pierre Gontard, was also said to have been authorized to talk to the FARC by the Uribe administration in that year.

Uribe revoked Chavez’ and Cordoba’s authorization shortly after, claiming the two were too close to the guerrillas.

Frank Pearl, the peace commissioner who replaced Luis Carlos Restrepo, who served the position from 2002 to 2006, as instructed by president Uribe, tried to initiate a peace process with the FARC again in 2008, according to President Juan Manuel Santos, who was Uribe’s defense minister until 2009.

The first physical meeting between government representatives and the FARC, according to the guerrillas, took place in March 2011 near the Colombian-Venezuelan border.

Santos has claimed that late FARC leader ‘Alfonso Cano’ approached him personally to initiate the talks. Santos agreed, but only if the talks remained “entirely confidential until [they] both decided when to go public.”

Because both parties were still at war and the peace talks were taking place in secrecy, the military and the FARC alike continued going after high-profile enemy targets.

The military killed Cano in November 2011, less than 10 months before the peace talks were formalized in the presence of Cuban and Norwegian state representatives.

It is unclear whether these foreign powers were already involved in negotiations at the time of Cano’s death.

According to Cano’s successor, “Timochenko,” the air strike that killed Cano was a severe setback to the talks.

However, then Venezuelan President Chavez intervened and was able to convince the guerrilla leadership to continue negotiating, according to ‘Timochenko.’

“We could’ve been much more ahead, had this not happened. We could even be talking about a deal already,” the current FARC leader said recently.

As a token of their seriousness, the guerrillas gave up the practice of kidnapping in February 2012.

The formalization of the talks

By August 2012, the talks were close to being formalized and were made known more widely within the government.

Former President Alvaro Uribe, who since leaving office in August 2010 had become a political enemy of Santos for both political and ideological reasons, received classified information about the talks and publicly announced that Santos and the FARC were talking on August 19, 2012.

While the Santos administration publicly denied Uribe’s rumor, the negotiators rushed to finalize the formalization agreement of the talks and Santos traveled to Cuba to sign the “General Agreement for the Termination of the Conflict and the Construction of a Stable and Lasting Peace” on August 27, according to the FARC.

A day later, the president confirmed that his administration had indeed been holding exploratory talks with the FARC.

On September 4, Santos appeared on television to announce that an accord had been signed to begin formal peace talks.

Timochenko appeared separately on television to confirm an agreement to talk had been signed to begin formal peace talks.

The Colombian government lifted 191 arrest warrants in order for 29 FARC negotiators to participate in the talks in October.

In October 2012, the government and FARC rebel representatives traveled to Norway for the formal announcement of the talks. After the first joint press conference on October 18, the FARC traveled directly to Cuba and the government delegation returned to Bogota.

Talks got underway formally in Havana on November 19, 2012 with an agenda seeking to address the causes, aggravators and consequences of the conflict.

This article is part of Colombia Reports’ Peace with the FARC special. If you like our work, become a friend for $5 a month.