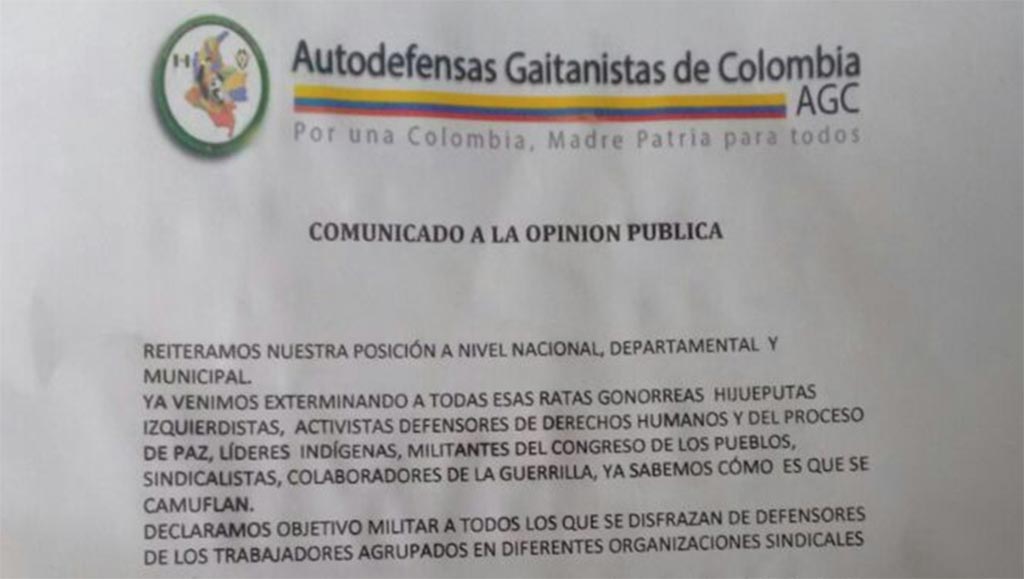 More than 500 political activists were killed in Colombia between 2011 and last year, according to a report presented to the British parliament by a British human rights NGO on Tuesday.

The 534 killings occurred in 26 of the 32 departments of Colombia and imply an average of two assassinations each week.

Mariela Kohon, director of Justice for Colombia (JFC) , said it was “unacceptable” that activists continue to be assassinated in Colombia, particularly by paramilitary successor groups, also the country’s primary human rights violator.

“The figures in this report are appalling, and of particular concern is the fact that more than 300 activists have been killed since the beginning of the peace process in 2012. It is of immense importance for the future of peace in Colombia that the Government take the necessary measures against paramilitaries and protect political activists ,” she said.

The report entitled “Silenced: The Murder of Political Activists in Colombia” was presented to the Westminster parliament on Tuesday with the aim of highlighting the horrific atrocities despite the ongoing peace process with Colombia’s left wing rebel groups FARC and ELN.

“The figures in this report are truly shocking and contradict the advances being made in the peace process. This targeting has continued with at least 10 political activists killed in March alone. If the British government is serious about supporting peace in Colombia it needs to urge its counterpart in Bogota to take much greater action against the paramilitaries and to protect all political activists,” said Kohon.

The Colombian government, until 2006 supported by a coalition of paramilitary groups in its fight against leftist guerrillas, has been dragging its feet to acknowledge that the demobilization of the paramilitary group AUC only partially succeeded.

However, the paramilitaries who refused to demobilize and formed groups like the Urabeños and Libertadores de Vichada have continued targeting leftists relentlessly almost from the minute the AUC formally ceased to exist.

The presentation of these figures comes at a critical time for Colombia as talks between the government and the leftist rebels the FARC enter the final stages, but seem stuck exactly on the issue of the paramilitary phenomenon.

The FARC fear an extermination campaign, similar to one that took place in the 1990s and 2000s, once they have demobilized and disarm.

International cooperation and supervision have been key elements of the peace process as a whole to date.

The presentation of these statistics aims to provide the members of the House of Commons with the reality of the violence in Colombia amid British pledges to support the peace process in the South American country.

Justice for Colombia is an NGO that campaigns for human rights, trade union rights and for peace with social justice in Colombia.

Since the beginning of the Colombian peace talks JFC has facilitated meetings between Northern Irish politicians involved in the Good Friday Agreement, and the Colombian government and FARC negotiating teams. JFC is an official adviser to the peace talks.