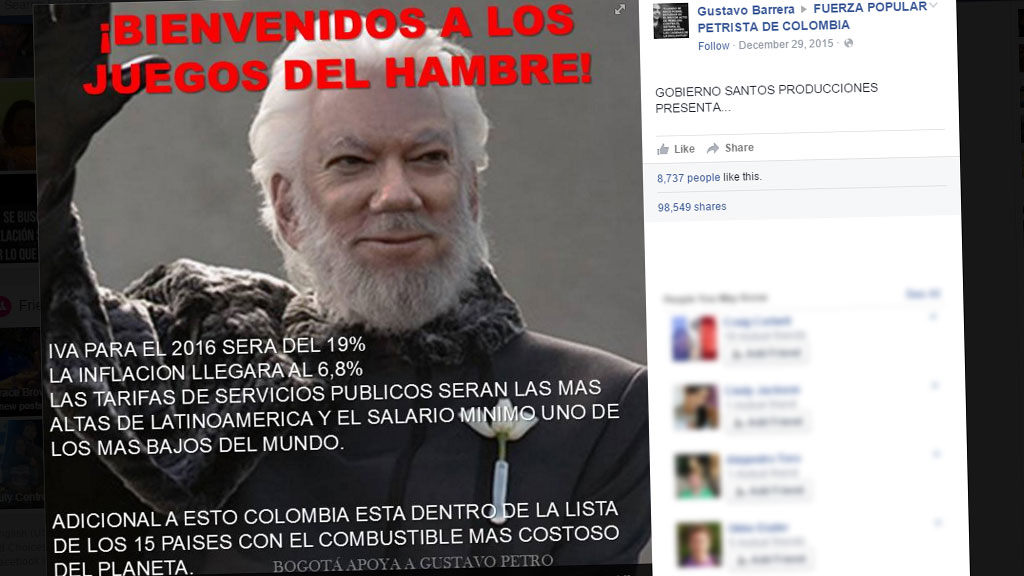 Colombia’s poor await a tough year with soaring food prices, a possible sales tax hike and a recent increase in minimum wage that fails to curb a drop in half of the labor force’s purchasing power.

Both the soaring food prices and the government’s desperate need for revenue are due to a drop in commodity prices that over the past year and a half have cut the price of the peso, Colombia’s national currency, in half.

More than half of Colombia’s exports consist of oil and oil-related products, which drove the price of the peso down with the global crude oil prices.

Because Colombia depends on imports for more than half of its food products, the cheap peso boosted inflation to almost 7% at the end of 2015 with no relief in sight.

To cover this growing inflation, the government increased minimum wage with 7% at the end of December.

More than half of Colombia’s labor force earns minimum wage that is now set at a monthly 690,000 pesos or $217 with an additional monthly transport subsidy of 77,000 pesos or $24.

However, while the minimum wage hike does meet the current inflation rate, it does not cover much higher increases in the price of basic food products.

For many of Colombia’s estimated 22 million minimum wage employees, the largest expense of a family is food, which has gone up almost 10% over the past year and threatens to further diminish their spending power.

Rice went up almost 14% over the past year and vegetables a staggering 42%. The price of meat grew less than the average inflation rate and is now almost 5% higher than a year ago, according to the country’s statistics agency DANE.

While labor unions, employers and the labor minister were negotiating the annual minimum wage hike in December, a Commission of Experts urged the government of President Juan Manuel Santos to raise the sales tax from 16% to 19% and include basic food products that now enjoy a lower sales tax rate of 8%.

On return from its Christmas recess, Congress will vote on whether or not it will follow the presidential commission’s advise and further increase the taxes.

Last year, Colombia’s lawmakers had already approved a temporary wealth tax targeting top earners in an attempt to curb the country’s excessive wealth gap and fill some of the fiscal gap caused by the dropping commodity prices.

Amid strong protests of Colombia’s employers, Santos promised to study a long-term tax plan that would support government efforts to reduce poverty without harming investment.

But instead of reforming Colombia’s tax system, the Commission of Experts came up with another short-term tax proposal, stressing that a sales tax hike is necessary to curb the current government budget deficit caused by the dropping global commodity prices.

“If the outlook at this moment is grey, with this [tax hike] it’s turning black,” said Guillermo Botero, the president of national merchants federation Fenalco, on Twitter.

According to Botero, an increased sales tax would only accelerate the ongoing inflation hike and further damage Colombia’s struggling economy.

Senator Jorge Robledo of the socialist opposition agreed with the trade federation and blamed the country’s attempts to please international economic organizations like the IMF and the OECD for the proposed tax hike.

“Santos named a commission of supposed wise men to work out what already had been ordered” by the international organizations, said Robledo, adding that “this is unacceptable.”

Even within Santos’ centrist coalition there is unease over the proposal.

On Facebook, Colombians doubled up on sarcasm and shared memes of the president announcing the 2016 Hunger Games.

Many Colombians can only afford two meals a day, according to a study carries out in Medellin.

More than half of Medellin goes to bed hungry: Study

“Rather than increasing the sales tax it is necessary we revise exemptions and mitigate the tax regressiveness for low-income households,” said Democratic Center Senator Ivan Duque.

The only national organization that has spoken out in favor of raising the VAT was the national banking association ANIF, which stressed that a sales tax hike would add 7 trillion pesos ($2.2 billion) to the treasury and thus reduce the budget deficit.