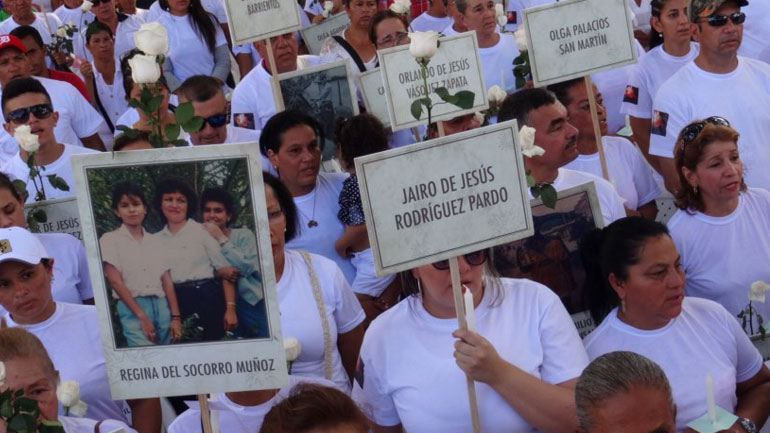 In a ceremony similar to one held by FARC rebels in western Colombia, government officials formally admitted responsibility and asked forgiveness to the town of Segovia where paramilitaries massacred 44 in 1988.

The ceremony is the first of many acts of repentance that seeks the healing of deep wounds caused by Colombia’s 51-year-long conflict the government and the FARC are trying to end.

The president’s Human Rights adviser, Guillermo Rivera, formally asked forgiveness for the massacre ordered by a Liberal Party politician that sought the extermination of local supporters of the communist Patriotic Union party.

The massacre was the first of many carried out by paramilitary forces paid at the order of former House Representative Cesar Perez who saw the leftists threatening his political ambitions.

Ranchers from the Antioquia province reportedly paid for the operation while local police and military units facilitated the gruesome killings.

The brothers of the leader of the paramilitary group, Fidel Castaño, would later found the AUC, the largest paramilitary group in Colombian history that, in collusion with politicians and the military, carried out numerous massacres.

While the FARC voluntarily plead for forgiveness for the 2002 massacre in Bojaya, the government was forced to do the same by the Inter-American Commission for Human Rights, something not forgotten by the locals.

“The state came to ask for forgiveness because the Inter-American Court of Human Rights ordered them. This chapter will never close… I do not forgive. God, our Lord, forgives,” Virgilio Gomez, whose son was murdered in the massacre, told Caracol Radio.

The massacre occurred in the evening of November 11, 1988 when paramilitary group ‘Death to Northeastern Revolutionaries’ (MRD) entered the town of 20,000 and committed the massacre, leaving “rivers of blood running down the street,” according to a survivor.

As part on a deal on victims as agreed as part of ongoing peace talks between the administration of President Juan Manuel Santos and the FARC, both parties committed to visit communities victimized by the conflict and preside formal acts of repentance.

Both parties hope to formally end the armed conflict that begin in 1964 before April next year. The conflict killed more than 260,000 Colombians according to official statistics. In total, more than 14% of the Colombian population, or 7.4 million people, have been victimized by the political violence.