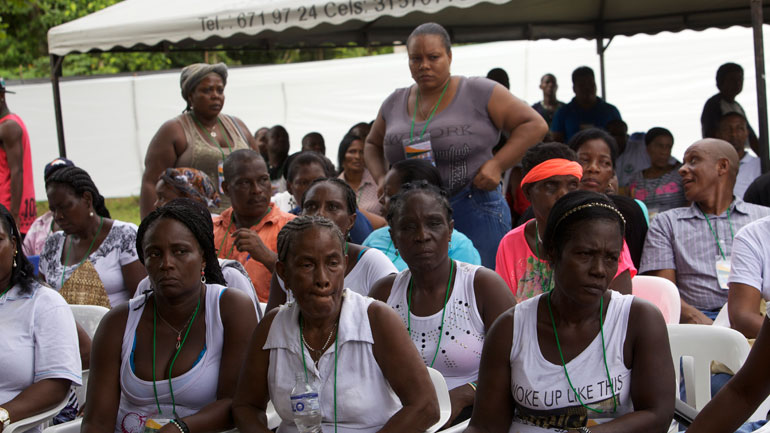 Negotiator “Pastor Alape” barely held his tears while asking locals for forgiveness for a 2002 FARC massacre that killed at least 79 in the west Colombian village of Bojaya, but some townsmen said the guerrillas will never find pardon in the town they destroyed.

The hands of Alape trembled and his voice broke on several occasions as he read the FARC’s apology for one of the worst war crimes committed during the guerrillas’ 51-year-long war against the state.

The act of remorse was part of ongoing peace talks that seek an end to 51 years of violence between the guerrillas and the state that has left more than 260,000 Colombians dead and 6 million displaced.

Facing some 700 members of the community that was destroyed when a FARC projectile fell on top of the local church proved hard for both the FARC commander and the community.

Between the words of the rebel commander, or when his emotions prevented him from speaking, one could almost hear a needle drop.

The locals who attended the emotional ceremony remained almost absolutely quiet during the four and a half minutes Alape needed to express his regret.

But not all locals took part and, according to the organization defending the locals’ rights, Alape’s words are far from enough for the community to forgive one of the worst atrocities committed by the guerrillas in the FARC’s history.

“They won’t convince me with words,” the 38-year-old Luz Nely Chaverra was quoted as saying by Medellin newspaper El Colombiano.

Nearly all members of Chaverra’s family died when in the midst of combat between guerrillas and paramilitaries, FARC guerrillas launched a projectile that accidentally landed on top of the church where 300 people had sought refuge from the fighting.

“I haven’t been able to reconstruct my life. May God forgive them because I am not going to this act” of reconciliation,  said the Bojaya local.

Victims’ representative Delis Palacios also said the ceremonial act was not enough, and that the victims need concrete action from both the government and the FARC to be able to begin overcoming their years-long victimization.

At a press conference in Bogota on Monday, the community representative demanded that “the recognition of responsibility does not only consist of this act,” but has legal consequences for the guerrilla group in a process of transitional justice.

The community did not just demand actions from the FARC, but also from the state that has been condemned for neglecting the town and failing to protect its citizens.

According to Palacios, authorities have ignored requests to investigate how many people died in the massacre. “We believe there were more than 79 and the process of identification and recognition was never completed,” said the representative.

“This … does not allow our community to find peace and impedes us from fully entering a process of reconciliation,” Palacios said.

Additionally, “we still have people with scars and injuries who every day complain about the pain.” According to the victims’ representative, these people have not had access to adequate healthcare in the 13 years that followed the massacre.

Moreover, the community suffered hundreds of assassinations before and after the massacre and wants to know who committed these murders and why. Authorities, who have been condemned for colluding with paramilitary death squads, never adequately investigated these murders and disappearances.