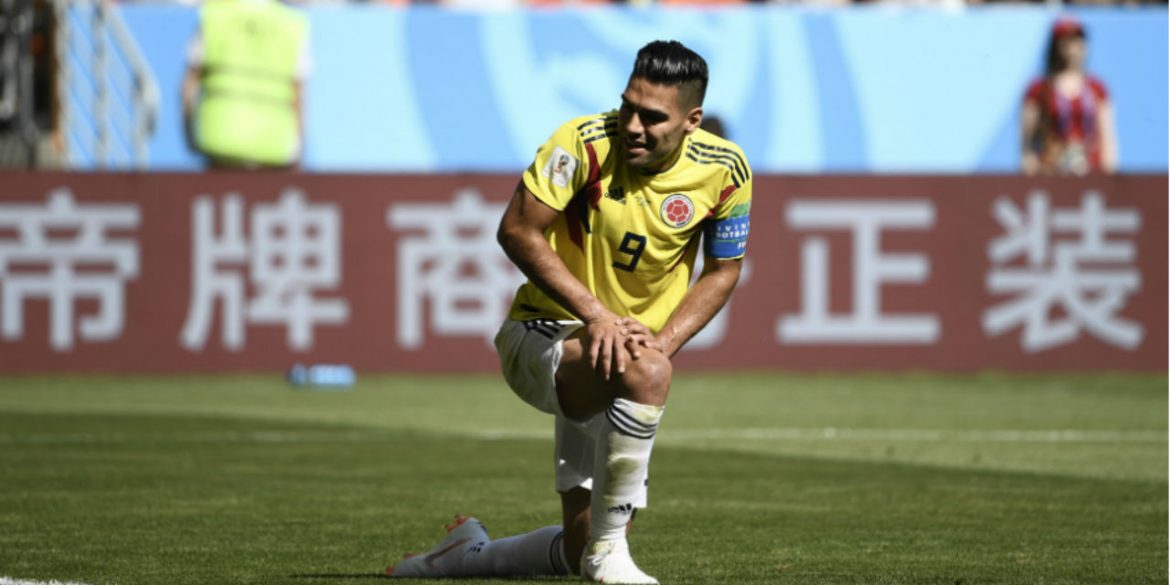 Colombia’s national soccer team on Tuesday fell to a 2-1 defeat against Japan in its first group stage game of the World Cup in Russia after being reduced to 10-men within three minutes.

Midfielder Carlos Sanchez was dismissed for a deliberate handball as Colombia went 1-0 down in the opening stages of the clash at the Mordovia Arena in Saransk.

A 39th minute Juan Fernando Quintero free kick drew Colombia level but the decisive moment came in the 73rd minute when Osako powered a header home for Japan for what was enough to condemn the South American side to an opening day defeat.

The Colombians were dealt a major blow before kick-off with the news that star playmaker James Rodriguez was not fit to start with coach Jose Pekerman calling on River Plate’s Juan Fernando Quintero to replace him.

The veteran Argentine coach opted not to start the youthful Yerry Mina and Davinson Sanchez at the heart of the defense, opting instead for the more experienced Oscar Murillo alongside the Tottenham star.

With left-back Frank Fabra ruled out of the tournament last week with a knee injury, Girona’s Johan Mojica was called in to deputize with Brighton-based Jose Izquierdo coming in ahead of him on the left wing.

Perhaps surprisingly Pekerman also included Levante’s Jefferson Lerma in the heart of the midfield alongside the almost ever-present Carlos Sanchez.

Colombia got off to a disastrous start when an error by Davinson Sanchez saw Osaka break through on goal. His shot was saved by the out-rushing David Ospina with the rebound from Shinji Kagawa apparently blocked by the hand of Carlos Sanchez.

In what what was a frantic opening, Colombia responded in positive fashion with Radamel Falcao going close in the 12th minute when he got on the end of a Quintero free-kick, only to be denied by Kawashima in the Japan goal.

Both sides attacked relentlessly in what was a very open first half hour, Colombia desperately trying to recover from a devastating start.

Juan Cuadrado made way in the 31st minute with central midfielder Wilmar Barrios joining the fray as Pekerman sought to bolster the midfield but surprisingly at the cost of one of Colombia’s best attacking options.

Despite the numerical disadvantage, Colombia gained a foothold in the game and were awarded a free-kick on the edge of the area in the 38th minute after Falcao was bundled over by Yoshida.

Quintero stepped up to take the free, waiting for the wall to jump, the former Independiente Medellin attacker rolled the ball underneath it catching Japan ‘keeper Kawashima unawares to draw Colombia level as the first half came to a close.

Japan started the second half the brighter, dominating the possession with Osako going close in the 53rd minute after he turned Davinson Sanchez in the area but Ospina was equal to the task.

The Arsenal shot-stopper again came to the rescue three minutes later when he again denied the Japanese who continued to grow in to the game.

Pekerman again looked to the bench in the 59th minute, introducing talisman James Rodriguez as Colombia struggled to create anything significant going forward.

Colombia paid the price for Japan’s dominance in the 73rd minute when Osako rose highest in the area to head home a Honda corner and put his side back into the lead.

“Los Cafeteros” responded again and James had a golden opportunity in the 77th minute after he was put through by Lerma but the Bayern Munich star was denied by a last ditch block as the ball blazed over the crossbar.

Japan’s numerical superiority began to show in the closing stages as the “Blue Samurai” managed to control possession and take the sting out of any potential Colombian comeback.

Colombia continued to rally but the effect of playing with 10 men for almost the entire game took its toll with Japan holding out, leaving Colombia with a mountain to climb in Group H.

The early sending off certainly changed the perspective of the game but Colombia will be disappointed with many aspects of the performance, particularly the inability of the defense to contain the Japanese.

Pekerman’s side will square off against Poland on Sunday in what is now a crucial game as the Colombians look to resurrect their World Cup campaign before facing Senegal in the final group game four days later.