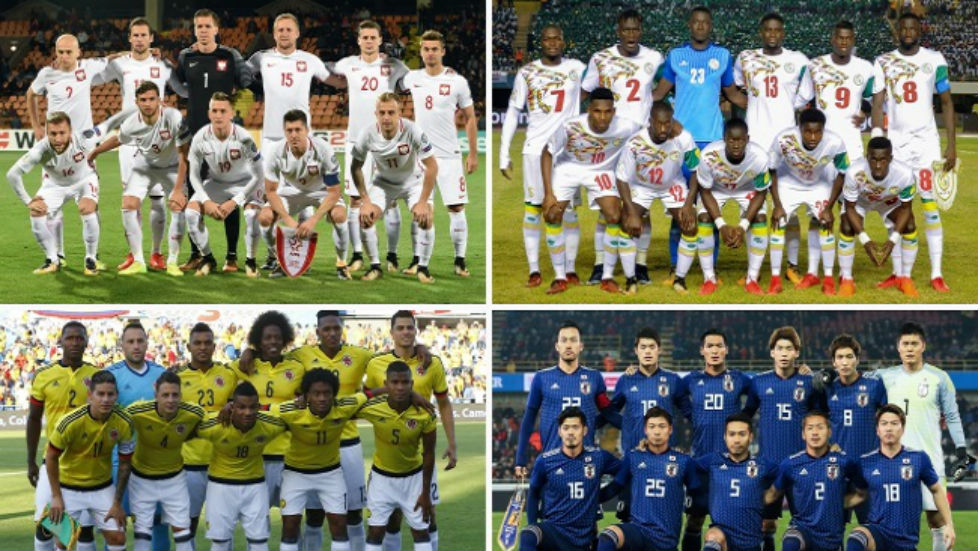 “Los Cafeteros” coach Jose Pekerman described the composition of group H as “even” as his side aims to improve on its performance from Brazil 2014, having reached the last eight.

“We know all the teams, the characteristics of their game. They are all very competitive,” said the veteran Argentine to reporters in the aftermath of the draw.

Pekerman expressed his satisfaction after qualifying for back-to-back World Cups, Colombia having suffered a 16-year exile from world soccer’s most prestigious showpiece after France’98.

What gives me joy is to have Colombia here in the World Cup. It was one of the things that when we arrived we were always looking for. The growth is strengthened when there is continuity, so I am happy to be in the World Cup again.”

Colombia will face Japan in its opening game on June 19 before facing Poland on June 24 with the final group game against Senegal scheduled four days later.

With expectations high among the Colombian fans ahead of the competition, talisman James Rodriguez affirmed that the primary focus of the squad will be to secure safe passage from the group.

“It’s a tough group, it’s complicated, but we want to make a whole country dream, the aim is to pass the first phase,” said the Cucuta-born attacker to Bayern Munich’s official TV channel.

Colombia’s opening clash with Japan mirrors the final group fixture from Brazil 2014 when the rampant South Americans triumphed on a 4-1 scoreline.

Japan impressed in qualifying, pipping Australia and Saudi Arabia to top spot in Asian Group B and will look to the experienced Shinji Kagawa of Borussia Dortmund and Leicester City striker Shinji Okazaki to spearhead its World Cup assault.

The Samurai Blue’s coach Vahid Halilhodzic sees the game as an opportunity for his side to avenge the humiliating 2014 defeat.

“The Colombia game will be key. Purely by coincidence I watched a video of them a few days ago. For Japan it will be chance to get revenge for the last World Cup,” he said to reporters.

The Franco-Bosnian who managed Algeria to the last 16 at the 2014 World Cup admitted “it could have been worse” after his side was drawn in Group H.

Japan’s best achievement at the World Cup has been reaching the last 16, a feat achieved as co-hosts in 2002 and again in South Africa in 2012.

As top seeds in the group, Poland perhaps pose the biggest threat to the advancement of Jose Pekerman’s Colombia with the second group game likely to be decisive.

The Polish are likely to travel to Russia en mass to see their side compete at the World Cup for the first time since 2006.

After netting a record-breaking 16, goals, Bayern Munich’s Robert Lewandowski is the obvious threat in attack for Adam Nawalka’s side.

Hola mi Hermano @jamesdrodriguez, I remember your great goals during the last World Cup. I hope you will remember mine from Russia #WC2018 #Russia2018 #PLCOL

Despite the attacking prowess of the Polish, Colombia’s Pekerman will however note that their defense has been porous over the qualifying campaign, conceding 14 goals, the most of all group winners, including shipping four against second-placed Denmark.

The Poland team is largely unchanged from that which reached Euro 2016 quarter-finals losing on penalties to eventual winners Portugal.

The eastern Europeans boast a rich World Cup history having qualified eight times, finishing third on two occasions in 1974 and 1982.

Colombia’s final group encounter will be against Senegal, who were somewhat fortunate in qualifying when an unprecedented decision by FIFA ordered a replay of its 2-1 loss against South Africa because of match-fixing by the referee, a game which Allou Cisse’s side won.

Despite Russia 2018 being only Senegal’s second appearance in the World Cup, sports minister Matar Ba is optimistic that the “Lions of Teranga” can reach the semi-finals of the competition.

“We have to have our objectives – those objectives are to get to the second round and do better than in 2002,” said Ba to BBC Sport.

“The semi-finals are achievable because today football is not about being European or African or American – football is global,” he added.

With Liverpool starlight Saido Mane within its ranks, Senegal hope to posses enough threat to surpass the achievement of reaching the quarter-finals in 2002.

With regard to the clash with Colombia, Ba believes that the globalization of football means that the element of surprise is no longer an issue when playing against teams from the other side of the world.

“Nothing can be hidden these days with the internet. We can see everything we can analyse Colombia’s matches and all the others,” he pointed out.

Colombia’s group is the only one in the tournament that does not contain a former winner of world soccer’s biggest prize.