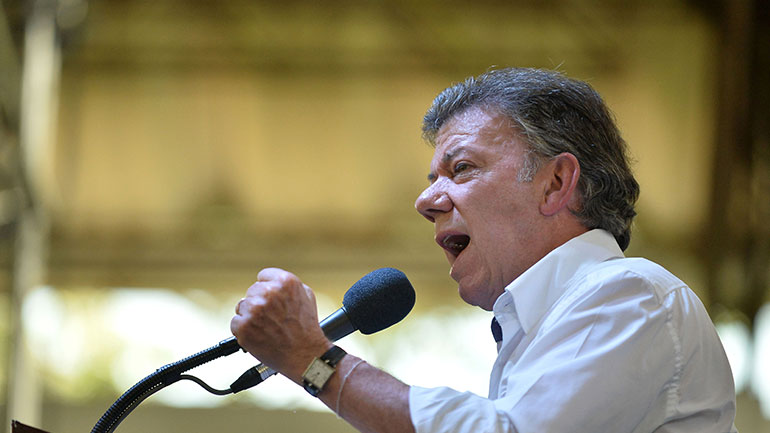 Amid deteriorating relations with Venezuela, Colombia President Juan Manuel Santos on Wednesday said that he won’t allow his country to be blamed for the neighbor’s “self-destructing” socialist system.

Santos and his Venezuelan counterpart Nicolas Maduro have been at odds for three weeks over Venezuela’s decision to deport more than 1,000 Colombians and close border crossings with Colombia.

The move spurred the spontaneous displacement of more than 20,000 Colombians who were living in Venezuela and feared abuses by authorities.

Over the past few weeks, Santos has tried to maintain a diplomatic discourse, but seemed to have lost his patience amid ongoing accusation that Colombia and Colombians have contributed to an ongoing economic and security crisis in socialist-run Venezuela.

“The problems of Venezuela — I repeat this time and again — are created in Venezuela, they are not created in Colombia,” Santos said during a public speech.

According to Santos, food scarcity, hyperinflation and increased violent crime that have plagued Venezuela are “product of the [socio-economic] model of this Bolivarian revolution, which has failed, which hasn’t worked.”

The Bolivarian revolution was called by late President Hugo Chavez, who introduced a Cuba-inspired socialist economic model to Venezuela after his election in 1999.

However, the far-stretching socialist policies that included the nationalization of numerous private business and the country’s oil industry, and the fixing of the official value of the Venezuelan currency, polarized Colombia’s neighbor.

Meanwhile, Venezuelan food supplies were disrupted, causing massive lines at supermarkets and stores, with shortages not seen since the fall of the Soviet Union in the late 1980s and early 1990s.

With the ruling party facing tough National Assembly elections this December, Maduro turned to accusing Colombia of exporting drug-trafficking, right-wing paramilitary groups to Venezuela and allowing the economic disruption by allowing Venezuelan contraband food products and gasoline to be sold on the Colombian side of the border where profit margins have soared.

“It’s a classic political move,” Luis Vicente Leon, the head of Venezuelan polling company Datanalisis, told the Wall Street Journal. “It’s obvious that the government in full election campaign is using the issue of contraband and the border—which were not issues for them previously—now as an instrument to distract the country’s attention from the problems that are affecting the president’s popularity.”

Santos, whose country is holding local elections in October, initially attempted to curb the tensions, urging a diplomatic approach to bilateral border issues.

However, as the Venezuelan government continued making allegations, including one over a Colombia-supported plot to assassinate Maduro, Santos called back the ambassador to Caracas and turned to international organizations like the OAS, UNASUR and the UN to seek mediation and international rejection of Venezuela’s expulsion of Colombian nationals.