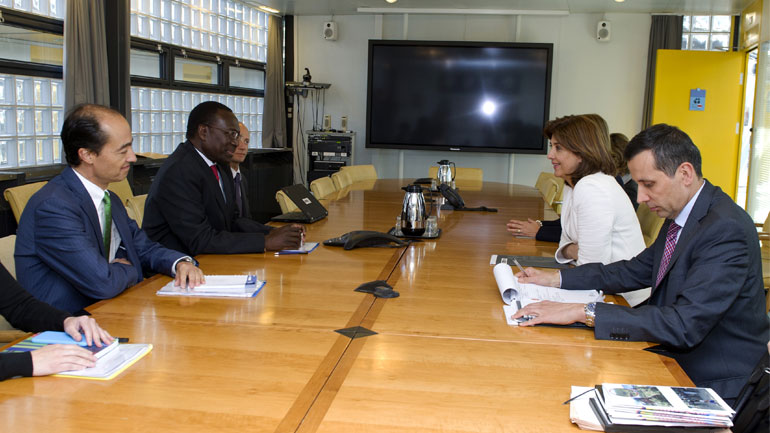 Colombia’s Minister of Foreign Affairs, Maria Angela Holguin met with the United Nations High Commissioner for Human Rights on Monday to discuss an ongoing crisis with Venezuela, spurred by the deportation of more than 1000 Colombians.

Holguin met with UN High Commissioner Zeid Ra’ad Al Hussein in Geneva, Switzerland to inform him of the human rights abuses that Colombian nationals have been facing since Venezuela’s president Nicolas Maduro closed the border with the neighboring country on August 19.

According to the ministry, Holguin expressed the Colombian government’s concern about the situation that has left over 10,000 Colombians stranded in their own country, after 1,408 were deported from Venezuela, and 10,000 fled the country out of fear of persecution.

Maduro declared a state of emergency in August, ordering a mass roundup of Colombian immigrants, ordering the eviction and demolishing of Colombians’ homes, and prohibiting a reported 2,000 children in Venezuela from crossing the border in order to get to school.

According to Colombia’s foreign minister, Venezuela is violating the human rights and dignity of the Colombian nationals who have been victims of “stigmatization, shaming and discrimination because of their nationality.”

In a column published by the Spanish newspaper El Pais on Saturday, the minister said that “we will not remain silent while we have compatriots who have suffered these outrageous abuses, who are waiting impatiently to be reunited with their families on the other side of the border, and want to be able to collect their few belongings in order to start a new life.”

The meeting took place a day after Maduro claimed that his Colombian counterpart, Juan Manuel Santos, is refusing to engage in a dialogue concerning the border crisis, despite the Colombian president saying Thursday that he would meet, but under conditions.

The mayor of Cucuta, the Colombian border city most affected by the exodus of Colombian residents in Venezuela, has sued Venezuela before the Inter-American Commission for Human Rights.