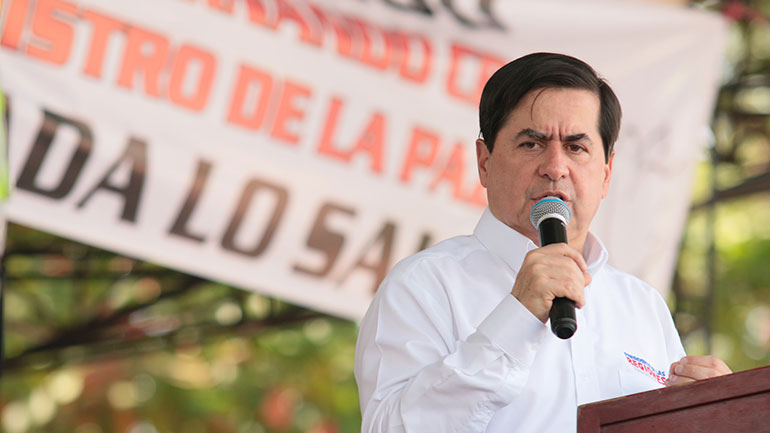 Colombia’s Interior Minister said Wednesday that the United States’ willingness to not pursue the extradition of FARC rebels helps the country’s peace process with the leftist guerrillas.

Interior Minister Juan Fernando Cristo responded to US ambassador Kevin Whitaker’s confirmation of an earlier promise that Washington will respect Colombia’s decision to not extradite FARC members who take part in an eventual peace process.

US will respect Colombia’s decision to not extradite the FARC

Several FARC leaders are wanted in the US on drug trafficking charges.

However, as the group is negotiating an end to 51 years of violence and wants to become a political organization, the administration of President Juan Manuel Santos agreed to shield demobilizing rebels from extradition requests.

The US special envoy to the talks, diplomat Bernard Aronson, said in September that his government “will accept the fact that it is Colombia who decides who will be extradited.”

Whitaker confirmed this on Tuesday, telling Caracol Radio that “if the [Colombian] government decides it is not convenient to extradite them, we’ll respect that.”

“If you want to see that as the US’ contribution to the peace process, you’re welcome to do so,” he added.

Colombia’s Interior Minister responded that “this is a position the government appreciates because it serves the purpose of reaching peace.”

The minister stressed that government negotiators are still negotiating on the fine print of the transitional justice deal that was closed last month.

If these talks go well, and the FARC and government negotiators can agree on victim reparation and the disarmament of the country’s longest-living guerrilla group, peace should be signed within six months.

The conflict in Colombia has generated more than 7.5 million victims, millions of whom are still displaced.