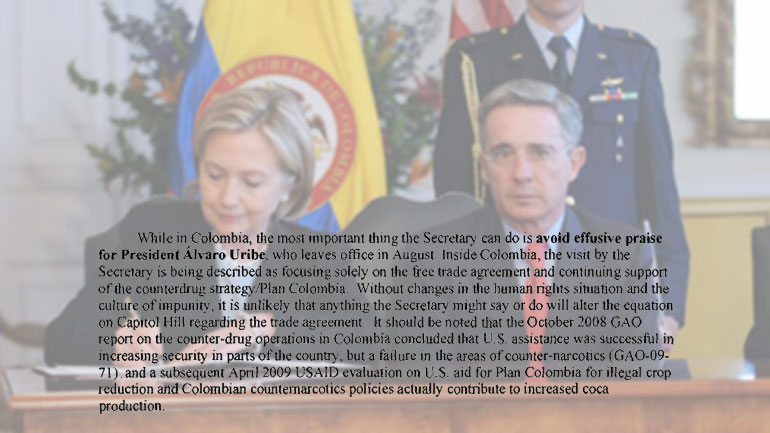 The United States’ embassy in Bogota warned former State Secretary Hillary Clinton ahead of a 2010 visit to Colombia to “avoid effusive praise for President Alvaro Uribe” because of the latter’s implication in mayor human rights abuses.

The email, dated June 3 2010 and originating from the office of Representative Jim McGovern (D-MA), was forwarded by Ambassador William Brownfield, now Assistant Secretary of State for Narcotics Affairs and Law Enforcement, and sent to Clinton’s then-chief of staff, Cheryl Mills, prior to flying to Colombia on a state visit.

Colombia signs technology agreement with US

“While in Colombia, the most important thing the Secretary can do is avoid effusive praise for President Alvaro Uribe, who leaves office in August,” the email told Clinton.

The former ambassador told Clinton that “it is important to recognize” that “the Colombian president has been a solid backer of U.S. policy and U.S. interests in the region, and has achieved some important improvements in the country’s security situation.”

However, the email advised, this recognition should avoid “repeating the tone of Defense Secretary [Robert] Gates’ April visit, in which he called Uribe a ‘great hero’ and failed even to mention any concerns.”

Among those concerns were mounting accusations of mass human rights violations that happened under Uribe’s watch.

The email highlighted the possible scale of the “false positives” scandal, in which Colombia’s US-backed military murdered thousands of innocent civilians and dressed them in guerrilla clothing in order to inflate body counts and receive bonuses.

Additionally, “mounting allegations that the President’s intelligence service, the DAS, was put at the service of paramilitary leaders and narcotraffickers; used to spy on and intimidate Supreme Court justices, opposition politicians, journalists and human rights defenders; and employed in a campaign of sabotage and smears against political opponents.”

“Prosecutors are alleging that the orders to have the DAS carry out wiretaps, surveillance and ‘political warfare’ came from high up in the Colombian presidency.”

“Parapolitics” is another topic discussed in the email, in which about 300 politicians were under investigation, many of them Uribe political supporters, for making “common cause with the far right [paramilitary] warlords”

“Those embroiled in parapolitics include the President’s cousin, Mario Uribe; the brother of his former foreign minister; and individuals whom the president had named to be Colombia’s ambassadors to Chile, the Dominican Republic, and Canada.”

Uribe was ‘the head of Colombia’s paramilitaries’: former AUC ringleader

“The Colombian prosecutors, investigators, witnesses and non-governmental organizations trying to uncover the truth about these abuses are working under conditions of great personal risk. They, too, are heroes and would benefit greatly from a public expression of concern about the cases they are investigating, and a reminder that their work is legitimate and important to US interests in Colombia.”

Uribe left office in August 2010 and later in 2013 formed the right wing Democratic Center movement to contest the 2014 national elections. He was elected as senator in the 2014 parliamentary election, which took office in July 2014.