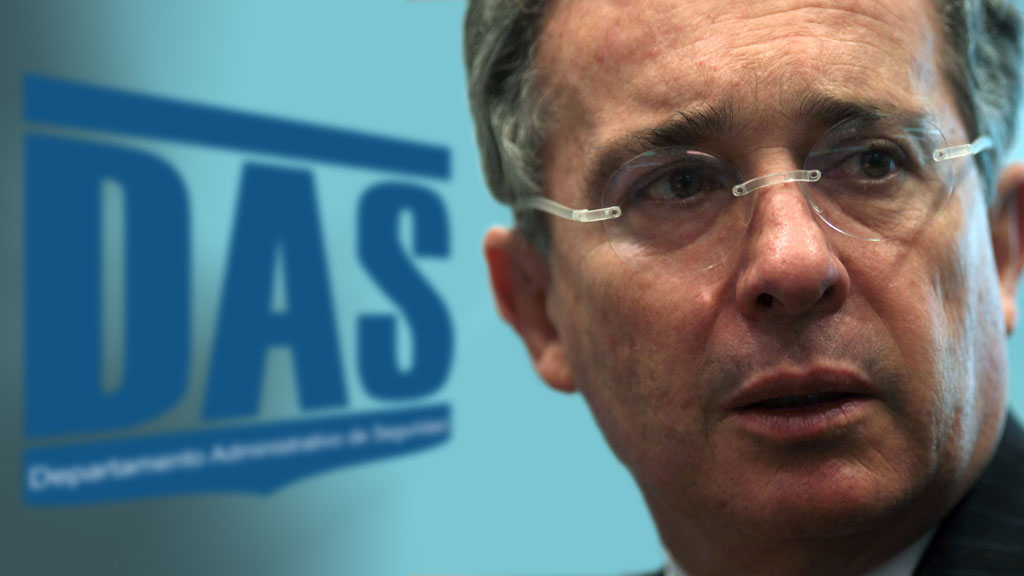 As Colombia’s Supreme Court investigates illegal spying by the country’s former intelligence agency, an increasing amount of details are revealed about the alleged political persecution of leftist opponents of former President Alvaro Uribe.

A former director of Colombian intelligence agency DAS, Jorge Noguera, is currently on trial for various charges surrounding the wiretapping scandal that has already seen multiple convictions of Uribe’s former chief of staff and a second intelligence chief.

Colombia’s now-defunct intelligence agency, the DAS, did not report to anyone but the president and had been spying on the Supreme Court, journalists, human rights defenders and politicians in a scandal that was uncovered in 2008.

Uribe has for years claimed himself to be victim of political persecution over his suspected involvement in the illegal activities of the spy agency.

“This is political persecution disguised as indictment,” the Democratic Center politician wrote on his Twitter page.

However, the trial of Noguera — who is already serving a 25 year prison sentence for the paramilitary assassination of a union leader — has revealed his own administration could be responsible for terrorizing opponents and using security agencies to spy on political rivals.

Former DAS deputy director of counterintelligence Jorge Alberto Lagos told Colombia’s Supreme Court on Wednesday that the DAS was in charge of creating reports specifically requested from the presidency.

Lagos was originally sentenced to 12 years in prison after the scandal broke but received a reduced sentence after he agreed to testify.

The criminal revealed on Wednesday that people with right-wing ideology that could have been aligned with paramilitary group AUC “were not considered as actors with criminal action,” and therefore were not illegally tracked by the DAS.

“The bad guys were only ever those of the extreme left,” Lagos added, before explaining that this was an opinion derived from reports requested by the presidency.

The DAS ex-official also stated that the intelligence agency undertook intimidation tactics against their opponents, also by request of the Uribe administration.

Meanwhile, three former officials of the DAS and allies of Uribe on Monday refused to testify in Noguera’s case.

The DAS ex-Assistant Director of Operations Martha Leal Llanos said she could not testify because in the agreement she had previously made with the Prosecutor General she had “specified” in which processes would give evidence.

Both men are currently facing criminal prosecution for the same scandal.

“It seems that these witness have agreed to exercise a pact of silence, because it is not possible that they have all come to the same position against the obligation that they have to give evidence,” said the fiscal delegate of the Supreme Court.

Colombia’s highest court will evaluate each of the cases to decide if they have the right to deny the trial of information under oath.

The witnesses argued that they will not “auto-incriminate” simply because there are open criminal proceedings against them.

Uribe has not been formally charged for the DAS scandal and has continuously denied his involvement.

Prosecutors have been attempting to uncover determining evidence about the former president since 2010.

In an interview with Blu Radio, the Deputy Prosecutor General said that one of the “big questions” in this research “is whether there was participation of former President Alvaro Uribe Velez.”

If the Prosecutor General is able to make a deal in exchange for information about the former president’s involvement, it could lead to serious charges and put Uribe’s political future in jeopardy.

The former director of DAS Maria del Pilar Hurtado turned herself in to authorities on 31stJanuary 2015 at her country’s embassy in Panama where she spent more than four years seeking political asylum.

The court case against Hurtado ended at the beginning of February but there has yet to be a conviction. Therefore the Prosecutor General has suggested some measures to ensure Hurtado’s collaboration and perhaps gain the information they need to aid further prosecution.

The former director could receive benefits if she helps prosecutors determine whether Uribe was involved in the illegal spying of the Supreme Court.

Prosecutor General Eduardo Montealegre ordered his group of advisers to review existing legislation to see if it would be possible to negotiate benefits with Hurtado in return for information about who else was involved.

Hurtado has so far stayed silent on the question of whether the former president should be directly implicated.

The DAS wiretapping scandal unfolded in 2008 after opposition politicians, media and authorities discovered that Colombia’s now-defunct intelligence agency, the DAS, had been spying on the Supreme Court, journalists, human rights defenders and politicians.

Later dubbed the “Colombian Watergate” scandal, it sparked a worldwide outrage as it not only implicated the Colombian president as the alleged force behind the illegal surveillance but also drew ties to the US — a close ally and financial contributor to Colombia.

The DAS began spying on government opponents and critics after then President Uribe appointed Noguera to run the DAS. Under Noguera, a number of intelligence agents with strong ties to the paramilitary AUC were appointed, and the agency formed the so-called G-3 unit that was in charge of the wiretapping that later became controversial.

Under Noguera’s leadership, the “Special Strategic Intelligence Group” G-3 was assigned the primary responsibilities of monitoring human rights groups that had proven or could potential prove troublesome for Uribe.