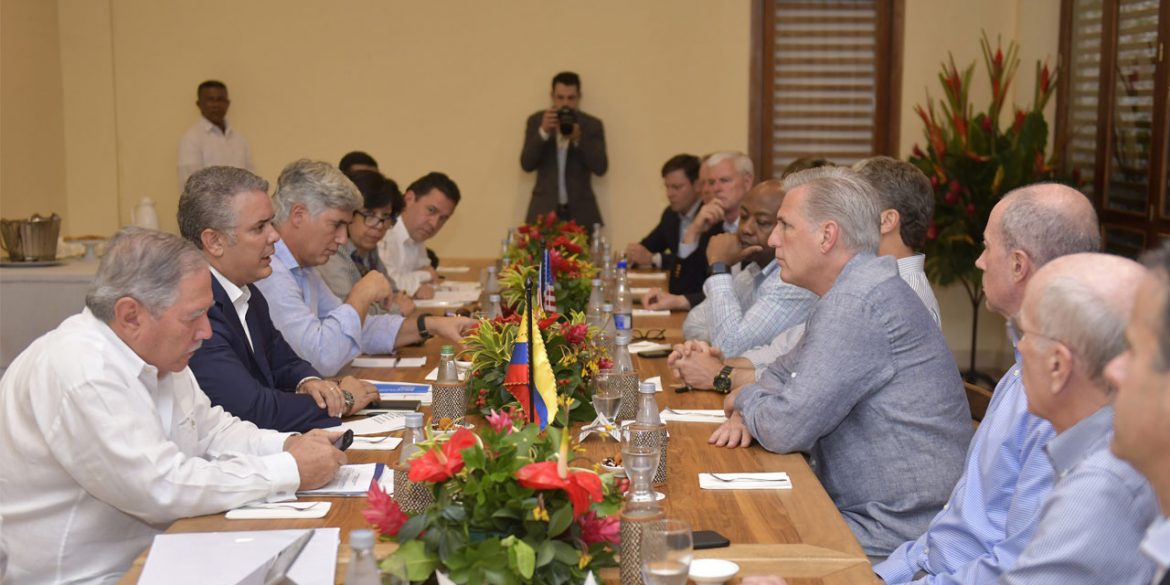 US congressmen visit Colombia to talk Venezuela, drugs and trade

The followed clashes between the Colombian president and US President Donald Trump, who criticized an alleged increase in drug exports under Duque saying that “he has done nothing for us.”

The commission of lawmakers took a more diplomatic approach and stressed the decades of relation-building that made Colombia one of the United States’ staunchest allies in the region.

In the last 20 years, we have been able to create a bond that cannot be broken. But we want to make sure that the next century is ours. That’s why we will continue to work with you, just as we have for the past two decades. And we know that the future can only be more promising. I want to thank you for your leadership and for your friendship.

In turn, Duque thanked the congressmen for their support in his countries efforts to fight the drug trade and leftist rebel groups.

The congressman expressed support for the government’s forced eradication of coca, the base ingredient of cocaine, a strategy that has been criticized by the United Nations and the US Government Accountability Office for its apparent lack of effect.

Duque has tried to reinstate the aerial fumigation of coca that has long been preferred by US counternarcotics officials. This strategy was banned by the court in 2015 after initial indications that the chemical used in this strategy, glyphosate, caused cancer.

The congressmen pledged to offer $200 million to assist Colombia with a crisis caused by mass migration from neighboring Venezuela, which is suffering its biggest humanitarian crisis since the 1980s.

According to the International Organization of Migrants, more than three million Venezuelan have fled their country. More than one million of them are estimated to be in Colombia.

The lawmakers and Duque reaffirmed their commitment to ousting disputed Venezuelan President Maduro, but did not commit to any concrete actions other than the diplomatic and economic sanctions that are already in place.

The reportedly amiable meeting came on the same day that Colombian opposition congressmen condemned the “meddling in domestic political affairs” of United States Ambassador Kevin Whitaker, who reportedly threatened to cut off aid to Colombia if Congress did not restrict the powers of the war crimes tribunal.

Whitaker has supported Duque in demanding that Colombia remove the war crime tribunal’s power to test evidence that would justify the extradition of FARC commanders.

The lawmakers and the president did not refer to this thorny issue.

The American Congressmen will travel to the border with Venezuela on Thursday to see with their own eyes how bad the crisis is there.