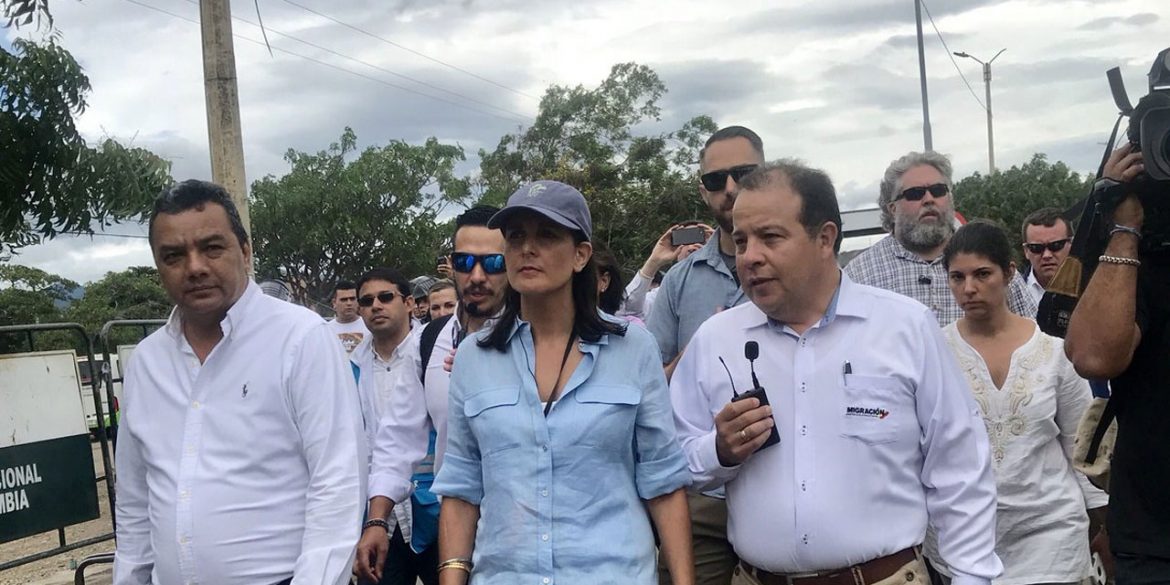 The United States’ ambassador to the United Nations, Nikki Haley, announced another $9 million in aid to Colombia for humanitarian aid for displaced Venezuelans.

Haley took the opportunity to visit a shelter for displaced on Wednesday, a day after she attended at the inauguration ceremony of Colombian President Ivan Duque the day before.

According to the Washington Post, the administration of President Donald Trump had already provided $60 million in aid through state humanitarian agency USAID.

From the border crossing just outside the Colombian city Cucuta the top US diplomat made it clear on Twitter that according to her government the authoritarian Venezuelan President Nicolas #Maduromustgo.

Thousands of people escape Venezuela every day, walking hours in the heat over this bridge, simply to get a meal or medicine for their families. Due to the corrupt Maduro regime, Colombia is now home to a million Venezuelans on any given day.

Both the US government and Colombia’s new administration are fierce critics of the Maduro administration, which has assumed almost absolute power in the neighboring country.

The socialist government’s finances, however, have collapsed after the bursting of a global commodity bubble in 2014 that sent the price of oil, Venezuela’s primary export product, plummeting.

On top of that, political tensions between Maduro and the country’s coalition of opposition parties have been increasingly polarized; violent clashes killed more than 150 protesters in 2017 last year.

According to Colombia’s migration agency, the country is currently home to more than 870,000 registered Venezuelan with an unknown number of Venezuelans and Colombian residents of the neighboring country crossing the border without registration.

Where did the Venezuelans go?

Apart from the United States, the South American country is also receiving aid from international organizations like the Red Cross and the United Nations.

The European Union pledged $40 million in June to attend the displacement crisis that has left a major impact on Colombia, especially in the traditionally neglected border region.