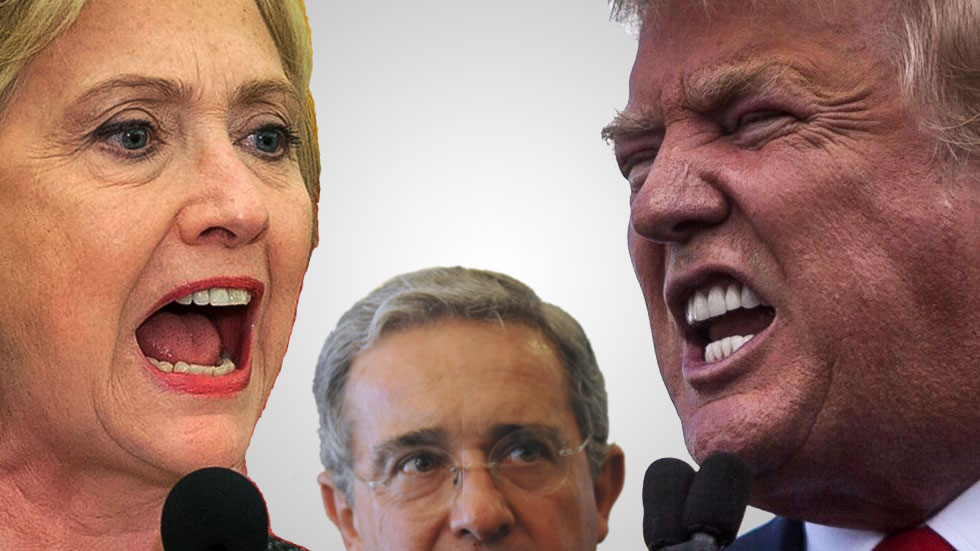 Former President Alvaro Uribe wrote both Hillary Clinton and Donald Trump, warning the US presidential hopefuls that a peace deal with Marxist FARC rebels could turn Colombia into “a second Venezuela.”

Uribe and other prominent members from his conservative opposition Democratic Center party asked the candidates to “reflect” on the process going on in Colombia in a letter allegedly sent to both.

“Today we need to appeal to you both to manifest our concerns about what is happening in Colombia with the so-called Havana agreements,” Uribe wrote in Spanish, a language neither candidate speaks.

The former president and his party have rejected peace talks with the FARC since they became public in 2012 and have rejected the deal since negotiators announced a successful end to the talks in September.

Rather than securing peace, Uribe said, the deal with the FARC would be an incentive for crime and undo security advances made in Colombia over the past decade.

Uribe stressed that in the peace deal bartered by his successor President Juan Manuel Santos, leaders of the FARC — a US-designated terrorist group — are shielded from extradition in the spite of the group’s major involvement in drug trafficking.

Additionally, former President Cesar Gaviria said that US President Barack Obama “is willing” to grant amnesty or reduce sentences to extradited members of the FARC in December, Uribe told the candidates.

The FARC have long demanded the release of senior member “Simon Trinidad,” who was made a formal peace negotiator in spite of him serving a 60-year sentence in the US.

Leaders of the FARC’s main rival, the now-defunct paramilitary organization AUC, are also in prison in the US after Uribe extra-judicially extradited them in 2008.

Victim organizations have asked for their repatriation so they can help clarify tens of thousands of homicides and disappearances committed in many cases in collusion with political or economic elites.

Uribe was president between 2002 and 2010 and on friendly terms with his then-US counterpart George W. Bush.

However, after the first election of Obama in 2008 and Uribe’s departure from the presidential palace in Bogota in 2010, Colombia’s conservative former head of state has become increasingly politically isolated, both at home and abroad.

Uribe does enjoy considerable support at home and is far more popular among the Colombian people than Santos, but the ongoing revelation of scandals is severely reducing the political power needed to represent his constituency.

The hard-line former Colombian President said earlier this year he had written Obama, asking him to reconsider the White House proposal to support post-conflict peace efforts with an annual $450 million aid package.

But, Obama simply ignored Uribe and the aid proposal is currently considered on Capitol Hill.

The former Colombian president also sought support with the Republican Party in Congress, with one congressional question as a result.