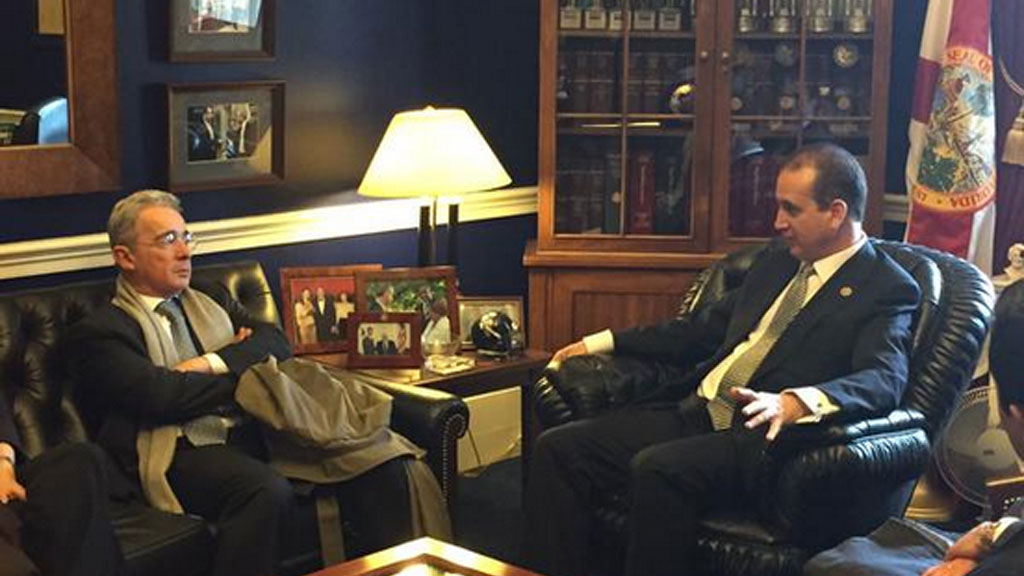 Former Colombian President Alvaro Uribe met with Senator Marco Rubio and three US house representatives to seek foreign support for his opposition to ongoing peace talks with rebel group FARC and the perceived political persecution against his political party.

According to the now-opposition senator, the administration of President Juan Manuel Santos is “negotiating impunity” with the FARC while allowing a decrease of public security Uribe had established when president between 2002 and 2010.

Amid decreasing political influence inside Colombia, Uribe went abroad to seek support for his opposition to the talks and demands that justice be imposed on FARC members in the event of a peace accord.

The conservative opposition leader on Wednesday was received in the office of Mario Diaz-Balart (R-FL) to meet with the Florida representative, fellow Florida Republican Ileana Ros-Lehtinen and Democratic Party Representative Henry Cuellar from Texas.

The Republican Diaz-Balart and the Democratic Cuellar are members of the House’s Subcommittee on State, Foreign Operations, and Related Programs. Ros-Lehtinen is the former chairwoman of the Commitee of Foreign Affairs of which she is still a member.

It’s these committees that eventually will lead the debate on the United States’ support for the ongoing peace process in Colombia.

Rubio is one of the most prominent members of the Tea Party and — like the other Florida representatives — a vociferous opponent of authoritarian governments in Cuba and Venezuela.

The Communist regime in Cuba and the Socialist administration of Venezuela are passively involved in the talks because of their ideological coincidence with the FARC, a Marxist rebel group formed in 1964.

The conservative senator is a member of the Subcommittee on Western Hemisphere and Global Narcotics Affairs, which has dealt with the FARC’s drug trafficking activities.

In order to fund its war against the state, the leftist guerrillas have played an active role in the production and trafficking of cocaine to the United States. A number of FARC leaders are on the US’ wanted list to stand trial on drug trafficking charges.

In order to facilitate peace, the Santos administration is negotiating amnesty with the rebels which according to Uribe will result in impunity for thousands of crimes, including numerous crimes against humanity, attributed to the FARC.

Uribe’s accelerated search for international support comes at a time the former president is investigated for his own role in the victimization of 7 million Colombians.

A Medellin court last week ordered the criminal investigation of Uribe over his alleged complicity in a 1997 massacre while the country’s Prosecutor General’s Office is trying to find evidence that could link Uribe to the illegal wiretapping of political opponents while he was president.

According to Uribe, the investigations are part of a political persecution of himself and his political allies.