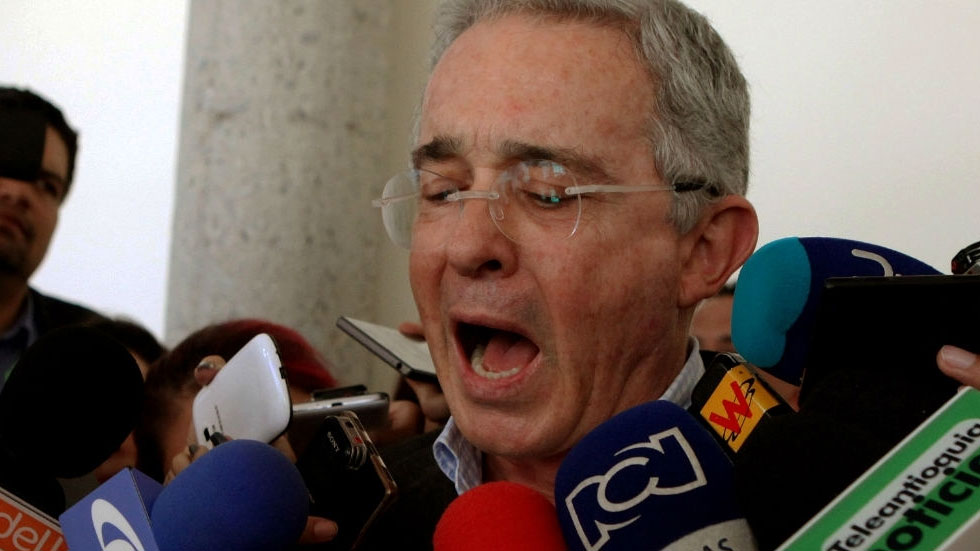 Colombia’s former president Alvaro Uribe celebrated sinking a peace deal with FARC rebels in the Medellin district that successfully sued the state for war crimes committed under his watch.

The former president took the stage in Medellin’s Comuna 13, where security forces and paramilitary fighters carried out an offensive against leftist militias in “Operation Orion” months after Uribe was elected president.

Local authorities recently embarked on a new mission to locate victims who were disappeared during and after the (para)military operation.

And now it turns out that the bad guy is me. Those corrupt allies of [President Juan Manuel] Santos who panic facing terrorism, who never fought it, they say that it was a paramilitary operation. This [district] was full of paramilitaries and guerrillas they never fought and now they come to look for mass graves to put me in jail.

The Inter-American Court for Human Rights last year convicted the Colombian State for war crimes committed in the operation.

Little more than a year ago, an Uribe-led a coalition of opponents to a peace process sank a peace deal including a transitional justice court charged with trying those implicated in war crimes.

The controversial former president has opposed the justice deal and has called for a justice system that would only try war crimes allegedly committed by the Marxist guerrillas.

Uribe was accompanied by his defense minister at the time of “Operation Orion,” Marta Lucia Ramirez, and former Antioquia governor Luis Alfredo Ramos, who is investigated for his alleged ties to the now-defunct paramilitary umbrella organization AUC.

In the Medellin district that suffered most from war crimes committed by state forces, Uribe attacked the transitional justice system JEP that was agreed in a revised peace deal in November.

According to Uribe, the government of his successor, Nobel Peace Prize laureate Juan Manuel Santos, used slush funds to “kneel the congressmen so they would vote for the JEP law.”

A Medellin court has ordered the criminal investigation of the president’s alleged promotion of paramilitary violence. This investigation could be carried out by the transitional justice court.

The International Criminal Court has additionally put pressure on Colombia’s Prosecutor General’s Office to prosecute dozens of top military officials who allegedly are responsible for the mass execution of civilians when the US-backed Uribe was president.