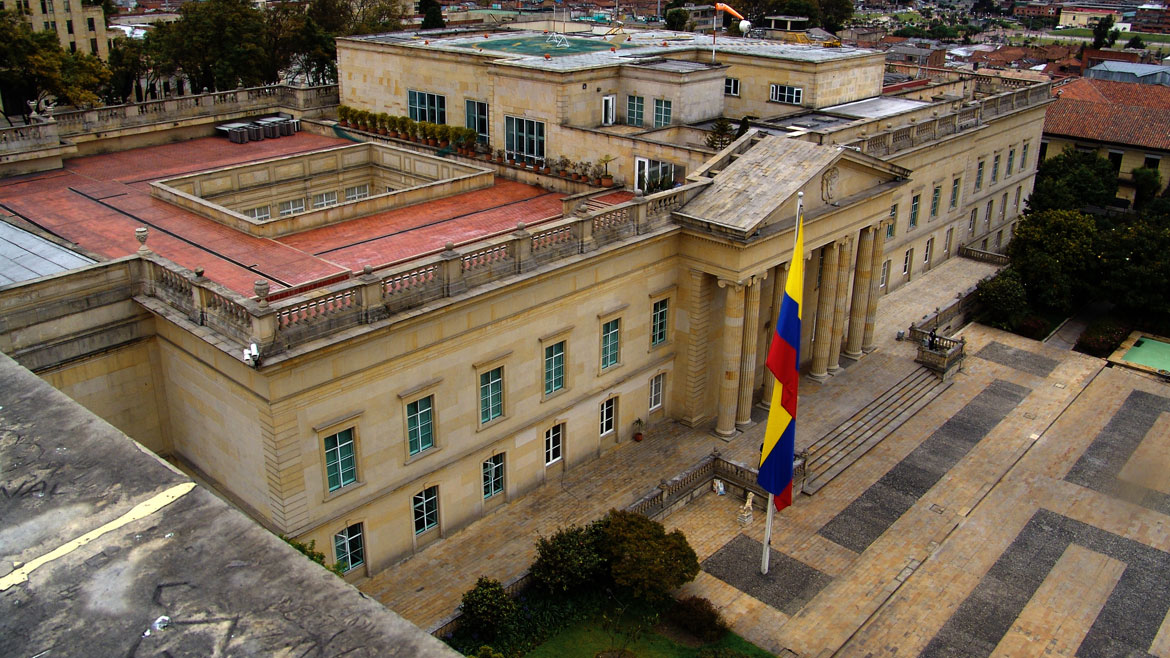 A court convicted two more former aides of Colombia’s former President Alvaro Uribe for taking part in a criminal organization that operated from the presidential palace.

A 2015 Supreme Court sentence indicated that the criminal organization that operated from inside the presidential palace was led by Uribe’s former chief of staff, Bernardo Moreno.

Moreno and multiple former intelligence officials were already convicted for the slew of crimes committed to derail investigations into politicians with ties to the AUC, and bribes paid to lawmakers by two of Uribe’s ministers.

The court found that Del Castillo and Velasquez were not involved in all the crimes committed by the criminal organization led by Uribe’s chief of staff.

The intention of the ex-officials was not to protect the institutionality, but to tarnish the image of the magistrates.

The Supreme Court ordered Congress to investigate Uribe’s alleged possible role as the mastermind of the criminal organization that operated from the presidential palace.

The court also ordered investigations into Senator Jose Obdulio Gaviria, the cousin of late drug lord Pablo Escobar and Uribe’s presidential adviser at the time whose name popped up in multiple of the investigations. 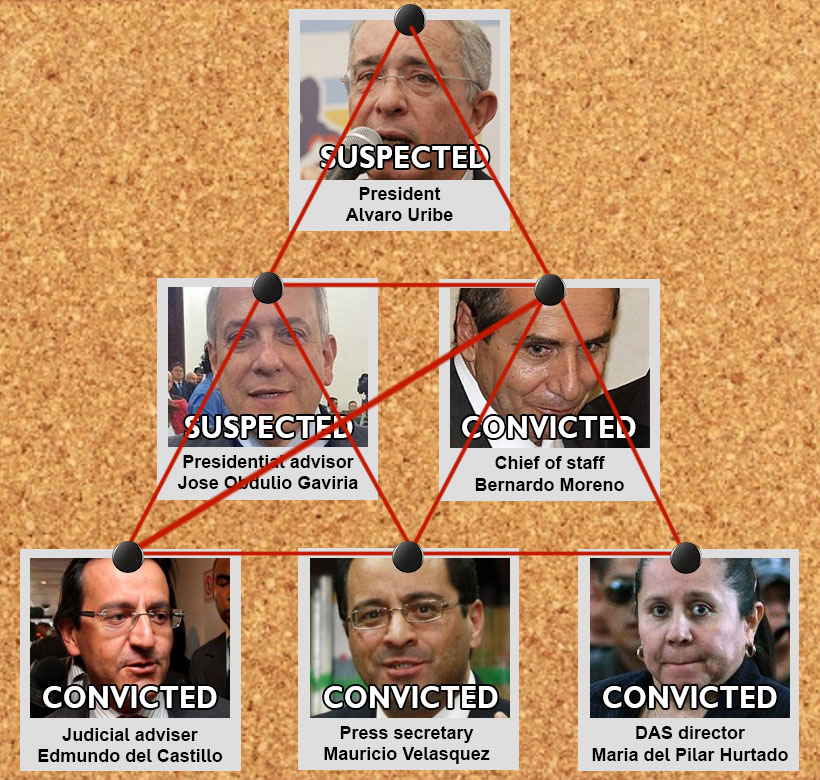 Both Velasquez and Del Castillo received illegally obtained intelligence from now-defunct intelligence agency DAS, which went as far as bugging the Supreme Court.

The DAS additionally wiretapped human rights organizations, journalists and opposition lawmakers who were also investigating the ties between the paramilitaries and the politicians, including Uribe.

Del Castillo subsequently used this information to fabricate criminal allegations against these organizations and people that were promoted by Velasquez in government-loyal media.

Uribe’s chief of staff also involved Gaviria, Del Castillo and Velasquez in the so-called “Case Trip,” which sought to fabricate claims that a Supreme Court trip to the city of Neiva had been financed by a business associate of drug trafficker “Chepe Ortiz.”

Del Castillo leaked this information to the Financial Intelligence Unit in order to trigger a criminal investigation while Velasquez leaked the fabricated scandal to Caracol Radio and Hurtado got Spanish columnist Salud Hernandez involved, according to multiple former DAS executives.

Both officials were also found guilty for their participation in a 2008 operation carried out by the DAS to link former Congresswoman Yidis Medina to guerrilla group ELN.

Moreno ordered this operation after Medina revealed that Interior Minister Sabas Pretelt and Social Protection Minister Diego Palacio promised her bribes if she voted for a 2004 constitutional amendment that would allow Uribe to run for reelection in 2006.

The court absolved Velasquez and Del Castillo were absolved of crimes related to their involvement in a number of other criminal conspiracies orchestrated from the presidential palace.

Mafia meeting in the presidential palace 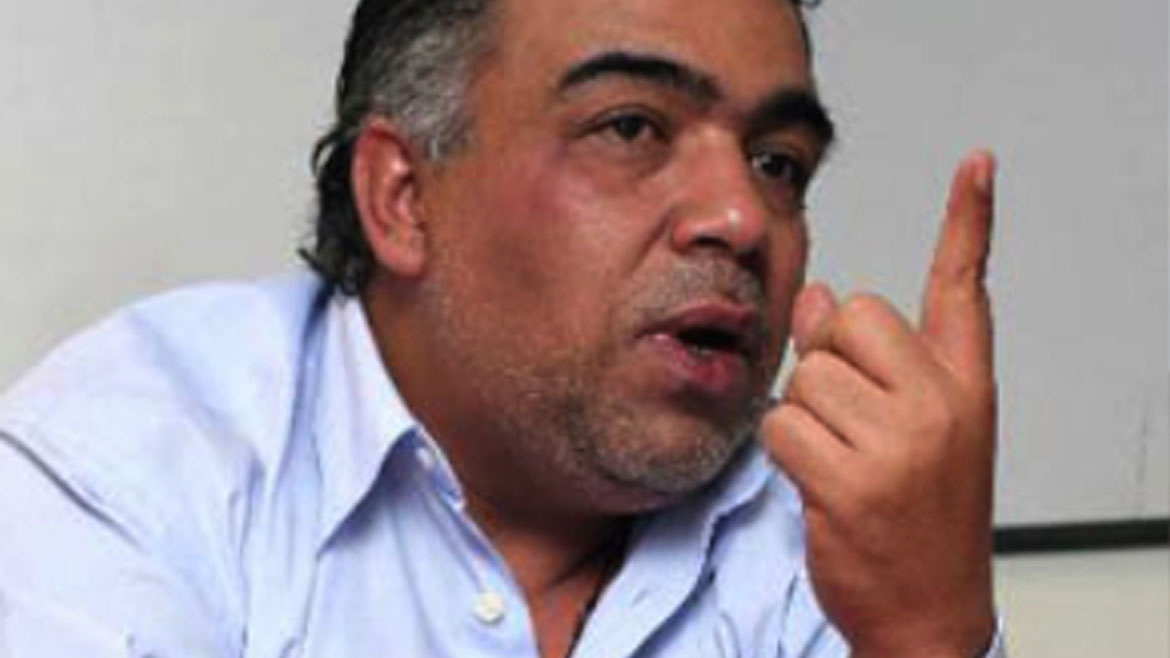 Both officials were not convicted for their meeting at the presidential palace with “Job,” the second-in-command of extradited Medellin crime lord “Don Berna.”

This meeting sought to coordinate the fabrication of accusation against Supreme Court magistrate Ivan Velasquez, the main “parapolitics” investigator.

Job was assassinated in Medellin in 2008 after journalists revealed the illegal meeting that allegedly was also attended by Gaviria.

Del Castillo asked the Prosecutor General’s Office to investigate Supreme Court magistrates in October 2007 after receiving documents from the consulate in New York in which former paramilitary fighter claimed he had been offered bribes.

Five days later, Velasquez prepared a press release on the claim, which the press secretary first sent to the DAS director, allegedly to justify a secret investigation into the magistrates.

The press release and the classified information were leaked to public news network Canal Uno.

Also in this case, the court did not find enough evidence for a conviction. 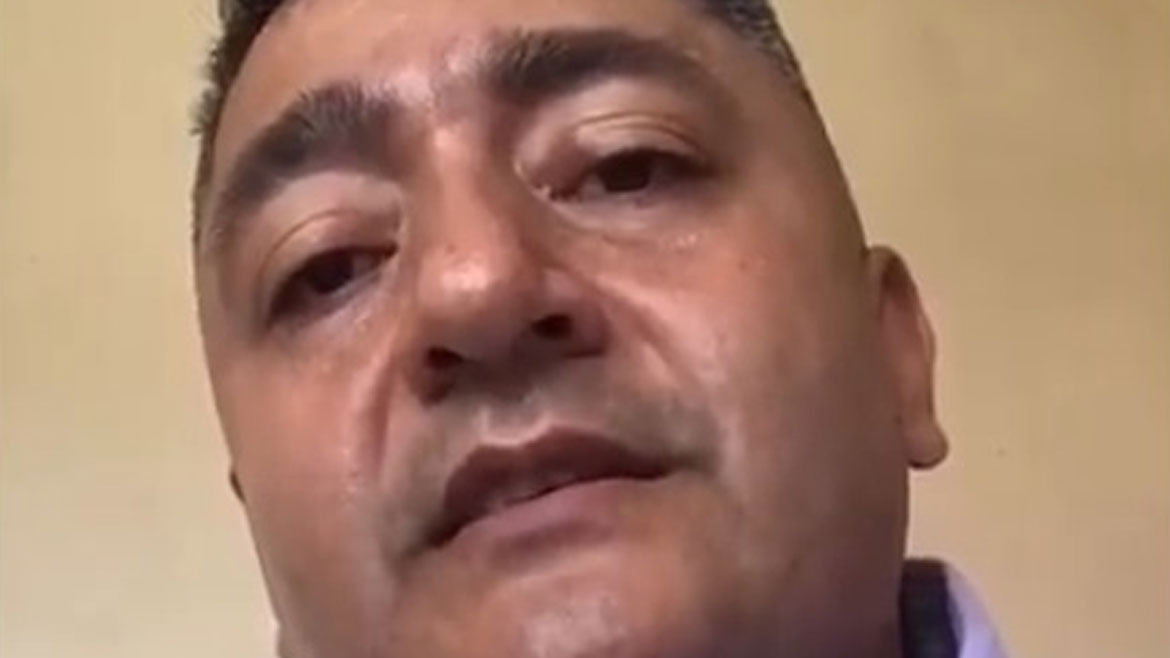 Uribe was personally involved in a conspiracy to discredit the Supreme Court’s main parapolitics investigator with the help of the DAS and Semana director Vicky Davila in 2008.

According to the DAS convicted director, the conspiracy sought to discredit Velasquez after opening investigation against the former president’s cousin, convicted Senator Mario Uribe, on September 26.

Hurtado told the court that Uribe immediately ordered his intelligence chief to investigate the magistrate. Moreno additionally ordered her to pick up a letter in Medellin on September 29, according to the former DAS chief.

DAS agent Marta Leal confirmed this and on October 1 met the driver of Uribe’s cousin gave her a letter in which a demobilized paramilitary fighter, “Tasmania,” claimed the Supreme Court magistrate had offered him bribes.

Velasquez discovered the conspiracy, however, and filed criminal charges on October 4.

Uribe and his allies refused to give up, however, and called in the help of “El Tuso,” one of the Uribe family’s drug trafficking associates.

El Tuso helped prep the former paramilitary fighter for a scripted interview with Semana director Vicky Davila, who worked at La FM at the time, on October 6.

El Tuso and Tasmania admitted in November that the whole thing was a hoax in November, which was later confirmed by multiple DAS officials and helped get Uribe’s former chief of staff in prison.