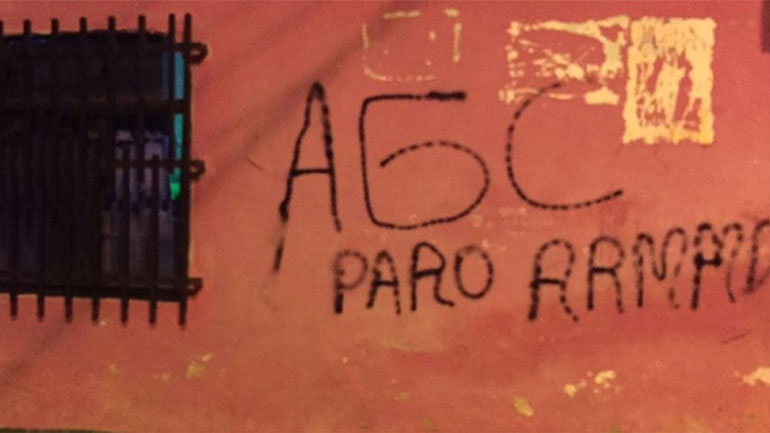 Neo-paramilitary group Urabeños shut down the north of Colombia and carried out several attacks on the security forces, leaving it clear with the authorities that paramilitary forces, not the police, control public security.

Both President Juan Manuel Santos and Defense Minister Luis Carlos Villegas tried to downplay the importance and impact of the economic shutdown ordered by the group former by dissident members of the formally demobilized AUC, the largest paramilitary organization in Colombia’s history.

However, Thursday must have made it very clear that Colombia’s ultimate authority is not the police, and even less the president, but a cocaine trading neo-paramilitary group.

The popularly known Urabeños, who call themselves the Gaitanista Self-Defense Forces of Colombia (AGC), called the “pacific” national strike in yet another show of force that couldn’t have embarrassed Colombia’s authorities more.

While both the military and the police said they would guarantee security, entire city centers in northern Colombia turned into ghost towns as no shopkeeper wanted to challenge the Urabeños’ order or believe in the corrupt police system’s ability to provide protection.

When police went to pick up the flight controller of the airport in Uraba to escort him to his work, the man — fearing for his life — simply refused.

In Carepa, even the mayor decided to keep his staff at home.

Additionally, the Urabeños shut down all traffic connecting Medellin, Colombia’s second largest city, to the Caribbean cost, leaving a large part of northwest Colombia entirely isolated from the rest of the country.

In the Cordoba province, “more than half of the province is paralyzed. Businesses are closed and vehicles are being burned. Where are the security forces? The same is occurring in Sucre, Bolivar and Antioquia,” said Conservative Party leader David Barguil.

Local media also reported a cessation of commercial activity in the Pacific Choco province. According to the Ombudsman’s Office, the northeastern Norte de Santander province was also affected.

According to Barguil, Cordoba “today lives under a permanent regime of terror,” adding that “the most discouraging is the absence of a security policy to confront this situation.”

Also in Antioquia, Colombia’s second largest economy after the capital Bogota, half the municipalities shut down entirely, according to W Radio.

Who are the Urabeños?

But the Urabeños went further than just shutting down air transport, road transport, public schools and shops, and took to actively targeting police and the military on a number of occasions.

In Puerto Berrio, two policemen were assassinated. In Turbo, one soldier was assassinated. In Quibdo, a police patrolman was also assassinated and in Buritica, presumed members of the Urabeños threw a grenade at a group of traffic police officers, injuring two.

According to local media, the Urabeños put a reward on the killing of policemen before the weekend, which so far has resulted in at least 10 dead police officers.

In attempts to counter the shut-down, police arrested nine alleged members of the Urabeños, who have grown to become a 3,000-men army since they announced their existence in 2008.