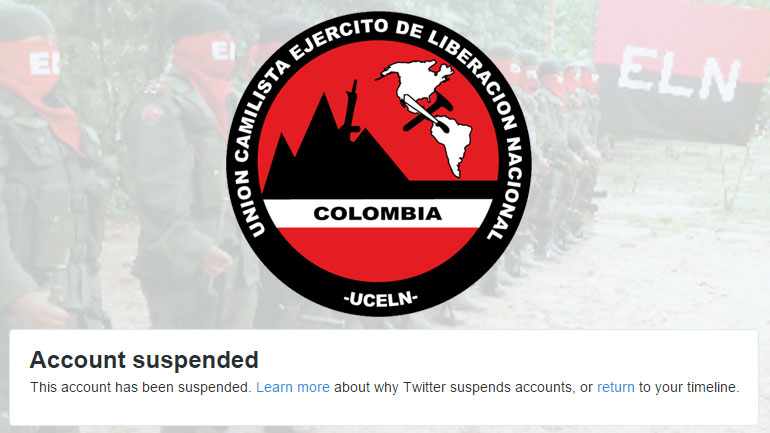 Social media platform Twitter has shut down the official account of Colombia’s second largest rebel group, the ELN, just when the guerrillas were stepping up violence ahead of possible formal peace talks.

The guerrillas used their accounts, @ELN_Colombia and @ELN_Ranpal, to disseminate political propaganda and updates on the preliminary talks with the Colombian government.

However, over the past week, the ELN has been promoting an “armed strike,” a shutdown of economic activity across Colombia. Violations of these imposed guerrilla shutdowns are commonly retaliated, for example by burning trucks or buses that refuse to adhere to the strike.

According to weekly Semana, the ELN ban was due to the fact that Twitter considered this a call to violence, a violation of the social media platform’s rules, and the fact the ELN is considered a terrorist group by the US government and not formally engaged in peace talks.

The Twitter Rules disallows users to “make threats of violence or promote violence, including threatening or promoting terrorism.”

Additionally, the social media platform’s guidelines also “do not allow accounts whose primary purpose is inciting harm towards others on the basis of these categories.”

The ELN’s website, hosted by a radically leftist server provider in Spain, is accessible as usual. The group is not active on Facebook, the world’s largest social media platform.

Twitter did not block the accounts used by Colombia’s largest rebel group, the FARC, which has been engaged in peace talks since late 2012 and has mainly been dedicated to the promotion of these peace talks and the publication of their demands.