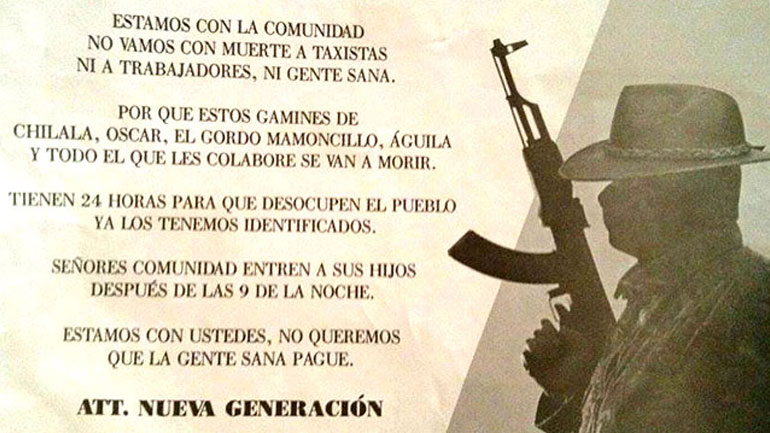 Authorities in at least two towns in northwestern Colombia are on high alert after pamphlets appeared that warned about pending “social cleansing” operations.

The pamphlets appeared in the towns of La Ceja and Apartado, both located in the Antioquia province. Also in the town of Remedios, threatening pamphlets were reportedly handed out, resulting in local shopkeepers to keep their establishments shut.

In La Ceja, a pamphlet signed by “New Generation,” one of multiple neo-paramilitary groups formed during the demobilization of paramilitary organization AUC, threatened to kill five determined “bums.”

The pamphlets had been going around since last week, warning the “bums” they will be killed while imposing a 9PM curfew on the entire population.One of the threatened persons was subsequently assassinated.

“We have already talked to the police so they investigate the pamphlets and protect the physical integrity of these people (on the kill list),” the local ombudsman, Leopoldo Botero, told Medellin-based newspaper El Colombiano.

The town’s mayor said that regional authorities had sent 35 extra policemen and 30 members of the military to increase security in the town.

In Apartado, a pamphlet signed by leftist rebel group FARC ordered local shopkeepers to obey to pay protection money while also threatening social cleansing operations would be carried out.

According to RCN Radio, the local police commander ruled out that the FARC is behind pamphlet and blamed imprisoned members of neo-paramilitary groups for the threats.

A number of FARC units are also active in the region.