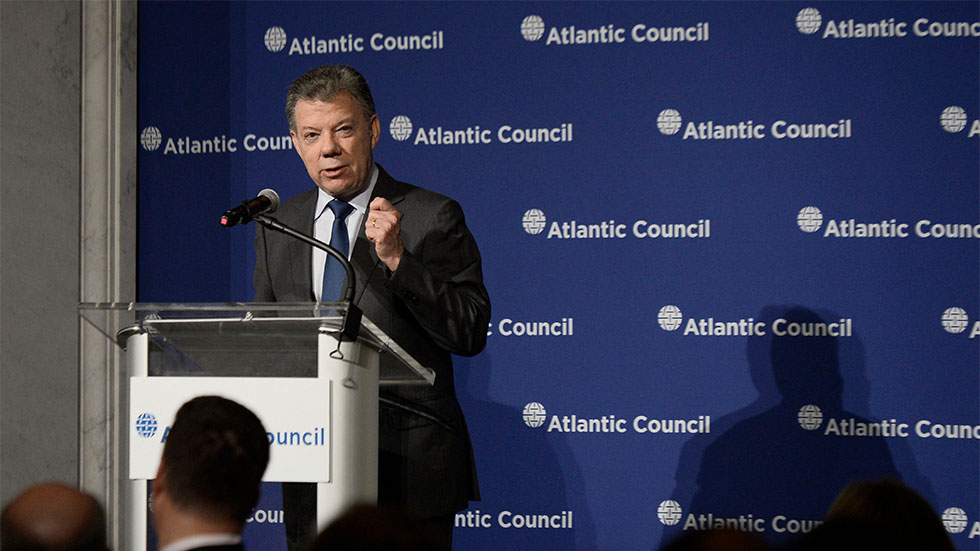 While in Washington to meet with US President Donald Trump, Colombia President Juan Manuel Santos urged to broaden and intensify international crime-fighting efforts instead of only focusing on drugs.

While speaking at think tank The Atlantic Council, Santos expressed his ongoing commitment to a continued international effort to curb crime in Colombia, but urged a radical change in policy, something he has done for years.

We must continue to work together against transnational crime because this is not limited to drugs or narcotics. These criminal structures also benefit from human trafficking, as well as illegal mining and illegal deforestation. Assuming these responsibilities requires increased international cooperation and increased cooperation between the United States and Colombia.

Having received no indication his US counterpart even wants to maintain the long-standing alliance between Washington and DC, Santos said to be optimistic his message to broaden crime-fighting efforts would be received positively by Trump.

President Trump is a pragmatic leader. I have faith he will be able the undisputed success of Colombia and our growth potential. He, more than anyone, knows to recognize a good investment. My desire is, when we meet together tomorrow, that we construct a renewed road map in which we assume commitments with clear and measurable objectives.

To put it less politically correct, Santos no longer sees benefit to continue the current “War on Drugs” and wants the US to assume a more integrated policy to fight crime in Colombia, and for good reason.

The 1999 “Plan Colombia,” which was defined by former US president Bill Clinton and former Colombian President Andres Pastrana to curb drug trafficking has failed embarrassingly.

At the same time, the groups involved in drug trafficking have assumed a multitude of other criminal activity, like illegal gold mining and human trafficking.

While US Attorney General Jeff Sessions last week announced an even more repressive approach to drug use and drug trafficking, the North American country’s government stands alone in this.

With Santos leading the way, many Latin American countries have rejected the US’ approach to drug trafficking and have urged to rethink the apparently failing policy that has already cost thousands of lives in Latin America.

Santos has effectively dumped Plan Colombia and — following a peace deal with Marxist FARC rebels last year — has taken Peru’s example to prioritize crop substitution and rural development to curb the cultivation of coca, the plant used for the production of cocaine.

This strategy has been explicitly endorsed by the United Nations and is currently being implemented without much intervention of the US, whose government has been in unprecedented disarray since the inauguration of Trump.

In Thursday’s meeting, Santos hopes to convince Trump to take a broader approach approach to transnational crime instead of the one proposed by Sessions.

To make sure his position was heard loud and clear in DC, the Colombian President said Wednesday that “Colombia is at the point of inflection and will not go backwards.”

With or without Trump’s support, Colombia intends to tackle crime with a policy that transcends drug trafficking, and includes money laundering, tax evasion, extortion and illegal mining.

Most importantly, the country has begun the problem of drugs as a public health, rather than a criminal issue.

When Sessions announced a hard-line in counter-narcotics effort, Santos has done the exact opposite. His administration has decriminalized the carrying and consumption of drugs and has made drug use a public health rather than a public security issue.