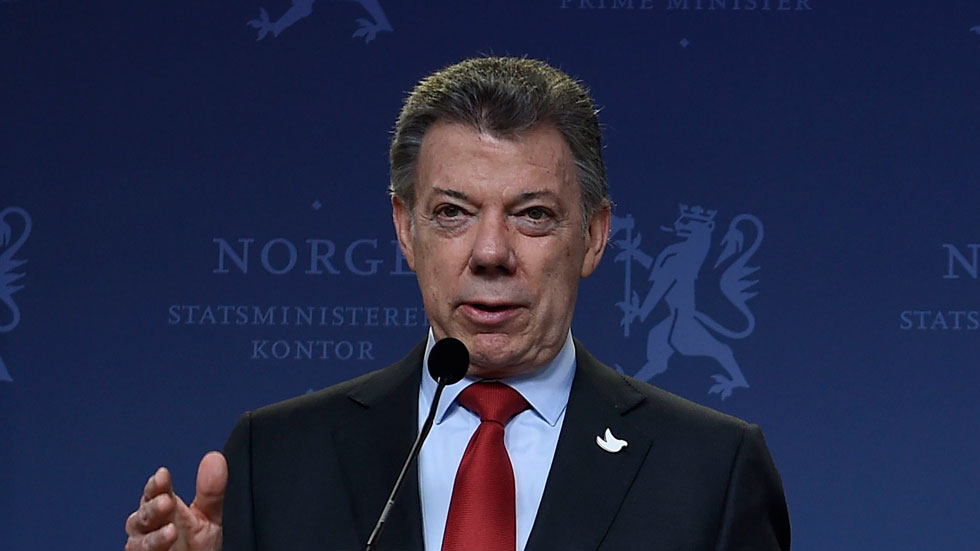 Colombia President Juan Manuel Santos took an unexpected jab at a the United States-led war on drugs when accepting the Nobel Peace Prize on Saturday, calling it “perhaps more harmful than all the wars in the world … combined.”

Santos has long been a critic of global counter-narcotics policies and has persistently called to “rethink” the United States-led war on drugs for years, going as far as proposing the legalization of cocaine as an option as far back as 2011.

‘It is time to think again about the war on drugs’: Santos

While domestically taking a more public health oriented approach, the administration of President Barack Obama has so far refused to change its controversial international strategy, spurring the Colombian president to use his acceptance speech and newly acquired status as Nobel Peace Prize laureate to step up his criticism.

The manner in which this war against drugs is being waged is equally or perhaps even more harmful than all the wars the world is fighting today, combined. It is time to change our strategy.

“Colombia has been the country that has paid the highest cost in deaths and sacrifices,” Santos said in reference to the drug war.

Drug trafficking is a global problem that demands a global solution resulting from an undeniable reality: The War on Drugs has not been won, and is not being won.

Statistics released by the US drug enforcement agency (DEA) earlier this week support Santos’ claim the drug was is not being won, claiming that between 1999 and 2014 drug overdoses in the US alone increased 279% from 16,849 to 47,055.

Last year, the number of heroin overdoses alone in the US alone surpassed the country’s gun deaths last year, according to the Center for Disease Control and Prevention.

US consumption of cocaine, Colombia’s main illicit export product and one of the main fuels of violence in the South American country, rose between 2014 and 2015 in spite of the approximately $50 billion spent on counter-narcotics efforts.

Cocaine availability and use in the United States increased across multiple fronts between 2014 and 2015 and is likely to continue increasing in the near term. Colombia will remain the primary source of supply for cocaine in the United States, and elevated levels of coca cultivation, potential pure cocaine production, and north-bound movement indicate that more cocaine is available for traffickers who want to attempt to re-invigorate the U.S. cocaine market. Data from seizures along the SWB, overdose deaths, and past-year initiates shows that cocaine availability and use in the United States have increased since 2014.

How drug trafficking works in Colombia

The human cost of the criminalized drug trade in Latin America, the main supplier of cocaine to the consumer countries in the US and Canada, is impossible to calculate, but has likely cost the lives of hundreds of thousands of Latinos from Argentina to Mexico.