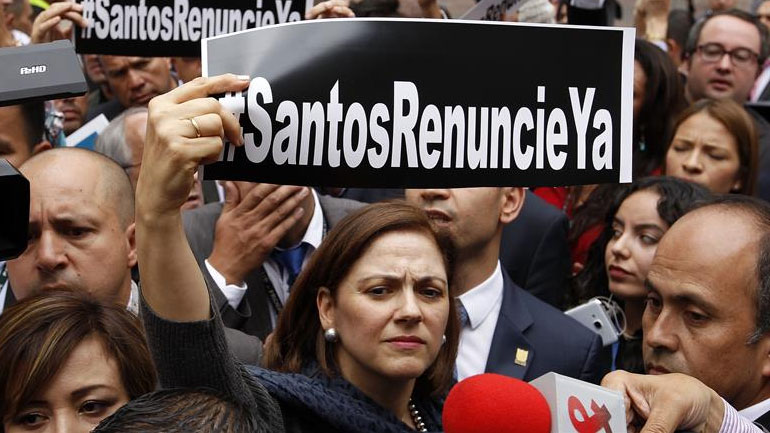 The accusation was made Thursday by El Tiempo, a newspaper with close ties to the family of President Juan Manuel Santos, Uribe’s political adversary and the primary target of the protests.

Based on anonymous sources within the Prosecutor General’s Office, the newspaper reported that members of the Urabeños in the Cordoba and Antioquia provinces told locals they are expected to attend the planned opposition protest in the province capital Monteria.

Additionally, the president’s son, Martin Santos, tweeted earlier this week that Uribe allies were promising money to people who assist in the opposition protest in the Tolima and Norte de Santander provinces.

“This is ridiculous,” Tolima protest coordinator Alvaro Julian Varela told local newspaper El Nuevo Dia. “We are actually trying to raise funds from businesses, industrialists and ranchers to pay some radio commercials we bought. The same with flyers and posters. In fact, I believe I will go out with my sons to put them up because we don’t have the resources to pay anyone to do it.”

According to House Representative Samuel Hoyos, the unconfirmed claims made by El Tiempo and the president’s son seek to criminalize the legal protests against the government and in particular against ongoing peace talks with leftist FARC and ELN rebels.

“They are trying to damage the good name of the Democratic Center [party] and disallow this civilian manifestation,” Hoyos said.

Uribe and his party reject Santos’ efforts to make peace with the rebel groups that have been at war with the state since 1964.

While Uribe in the past has not been able to mobilize large numbers of people to support his opposition to his successor, the former president’s skepticism about the peace talks is shared by the vast majority of Colombians, who trust neither the government nor the guerrillas.

Additionally, Uribe’s party is under major pressure over alleged war crimes, and proven election fraud and corruption that have sent a number of prominent party members to prison.

Democratic Center party president Oscar Ivan Zuluaga risks prison over his alleged involvement in the leaking of illegally obtained classified information, while Uribe himself is facing a series of accusations over his alleged ties to right-wing paramilitary groups and politically persecuting critics during his administration.

The scandals have drastically reduced support for Uribe and has politically isolated his party.