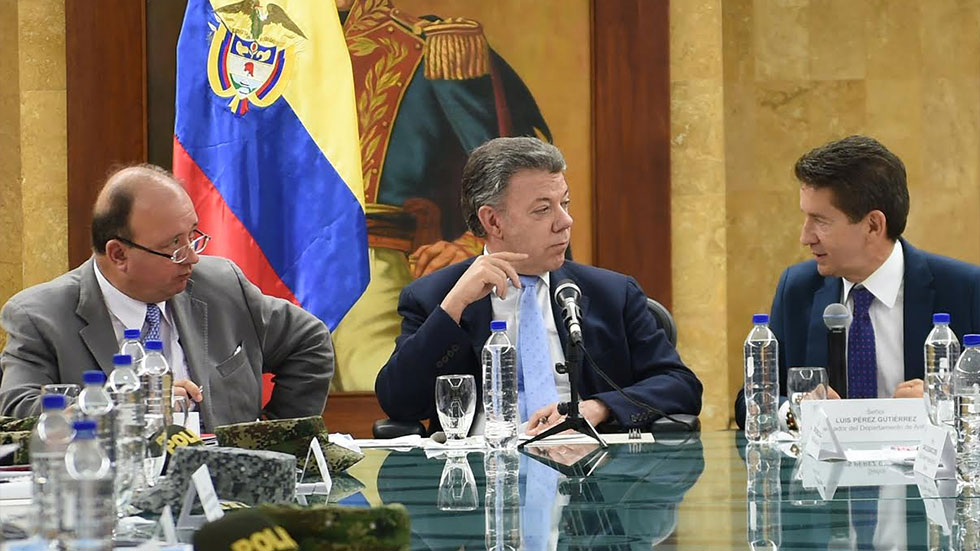 Colombia President Juan Manuel Santos will study paramilitary successor groups’ request to take part in an ongoing peace process with Marxist guerrillas, according to the governor of the Antioquia province.

The statement of Antioquia Governor Luis Perez came just days after an open letter by the Medellin-based Oficina de Envigado in which the crime syndicate reiterated its call to be included in the peace process.

The president has told me he will study the issue with the chief prosecutor, because any voluntary surrender should be carried through with the Prosecutor General’s Office. He is positive about the situation.

In the letter of the Oficina, a group once founded by slain drug lord Pablo Escobar, its leadership said “we wish and are willing to radically contribute to peace in our country, in sequence with the construction of the great national peace agreement.”

“This is the moment in history and because of this we aspire to decidedly support the end of the conflict and the construction of peace that will be truly definite.”

The Oficina also called for the inclusion of the Gaitanista Self-Defense Forces of Colombia (AGC), a.k.a. the Urabeños, by far the largest remnant group of paramilitary AUC that largely demobilized between 2003 and 2006.

The AGC, the most powerful drug trafficking organization in Colombia, is currently the country’s largest illegal armed group now the FARC and the government have signed a revised peace agreement.

This group has also repeatedly called to be included in the peace process and has explicitly supported peace talks with the FARC, traditionally the archenemy of AGC predecessor AUC.

While the government has consistently stressed both the AGC and the Oficina are common criminal organizations, but this is denied by the AGC.

On its website, the group says they formed “in principle as the result of a failed peace process with the Self-Defense Forces of Colombia” under former President Alvaro Uribe, the main critic of peace with the FARC.

In their peace deal, the guerrillas have bartered a government commitment to effectively combat paramilitarism, the use of violence to advance elites’ political or economic interests.

While the Oficina wasn’t founded until the 1980s as Escobar’s enforcer army with primarily criminal purposes, it effectively merged with the AUC’s Cacique Nutibara block (BCN) in the 1990s under the leadership of paramilitary warlord “Don Berna.”

Paramilitary groups similar to the AGC have marred Colombian politics since before the armed conflict.