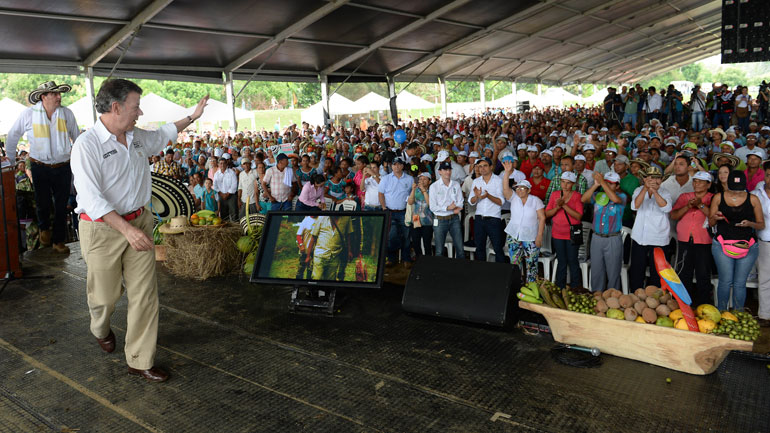 Colombia’s president, Juan Manuel Santos, can count on the approval of 44% of Colombians, according to pollster CNC that generally releases the most optimistic ratings compared to competitors.

Santos’ approval rating went up from 38% in May when the president suffered a major drop in popularity due to persistent skepticism amid ongoing peace talks with rebel group FARC that have been ongoing since November 2012.

When Santos took office in August 2010, his approval rating stood at 80%, according to the pollster.

In spite of a recent escalation in violence due to the falling the falling apart of a number of attempts to deescalate violence, Colombians have become more positive about the negotiations that seek to end more than 50 years of armed conflict, said CNC.

Approval of the talks went from 55% in May to 57% this month, according to the poll. The remaining 43% said to disapprove of the talks.

Other pollsters have shown a significantly more negative perception of the talks.

According to CNC director Carlos Lemoine, recent military successes in the internal conflict with leftist rebel groups have improved confidence in the president and the talks.

Paradoxically, 61% of polled Colombians said Santos was mishandling the war against the guerrilla groups.

The president also failed to receive approval for his public security policies with 63% claiming the president was doing a bad job.