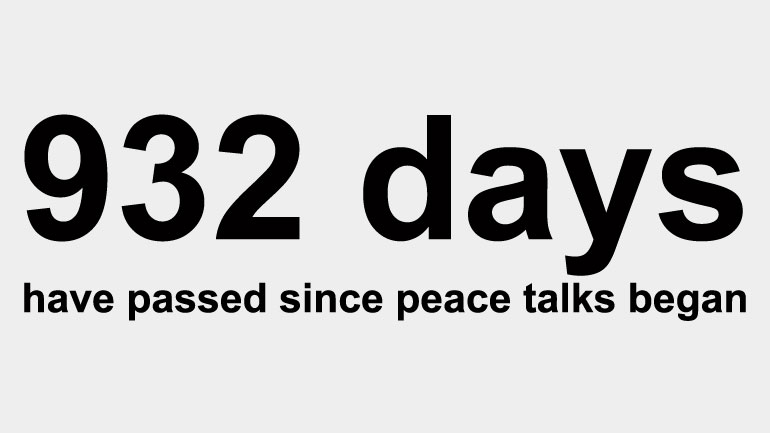 Colombians are getting “fed up” with peace talks between the government and rebel group FARC, a key senator belonging to President Juan Manuel Santos’ governing coalition said Tuesday.

The peace talks aim to end 50 years of war, but have been ongoing for more than two and a half years without any indication they may end successfully soon.

This lack of visible progress, combined with ongoing FARC attacks, is wearing out Colombians’ patience, said Senator Armando Benedetti, a key senator of the president’s U Party.

“The people are getting fed up with this peace process … either something positive that unlatches the peace process happens or there is no way the people will support this process ever again,” Benedetti was quoted as saying by newspaper El Espectador.

By the end of April — less than two weeks after the FARC violated its self-imposed unilateral ceasefire killing 11 soldiers — support for the talks had dropped to 52% from 69% in February.

Since then, intents by both the military and the FARC to deescalate armed conflict during the peace talks were largely undone, resulting in a resumption of FARC attacks on the security forces and infrastructure.

Gallup is set to release a new poll at the end of June, which is going to measure people’s perception of the peace process after the falling apart of the FARC’s truce and a subsequent escalation of rebel-instigated violence.

According to El Espectador, recent attacks on the oil industry in the southern Putumayo province could further diminish support for an eventual negotiated deal has to be approved by the Colombian people in a referendum.

The recent announcement of a Truth Commission and news that both the FARC and military together have begun clearing landmines have been overshadowed in mass media by the FARC’s resumption of violent attacks.

These attacks are “very painful but don’t mean we are going to surrender peace. It should make it clear to us that we must reach peace,” said Viviane Morales, a senator for the coalition Liberal Party.

Norway and Cuba, the host countries of the talks, joined by the UN and international non-governmental organizations, have urged the warring parties to speed up talks about a bilateral ceasefire.

While the FARC has long urged a bilateral truce, the Santos administration has refused to agree to one, lacking confidence in the rebels who previously have been accused of having abused the absence of military pressure to regroup with the purpose of making military gains.

Santos said last month that a bilateral ceasefire before a formal peace agreement is “unlikely.”

During the negotiations, partial agreements were signed on rural reform and political participation, both considered the main causes of the conflict, and drug trafficking, which has fueled the violence since the 1980s.

The two teams are currently in Cuba negotiating how to compensate the 7 million victims of the conflict, how to achieve justice for the tens of thousands of crimes committed by both parties, what kind of punishment is adequate for the tens of thousands of war crimes committed by both parties and how to reintegrate demobilized FARC fighters in the event of a final deal.