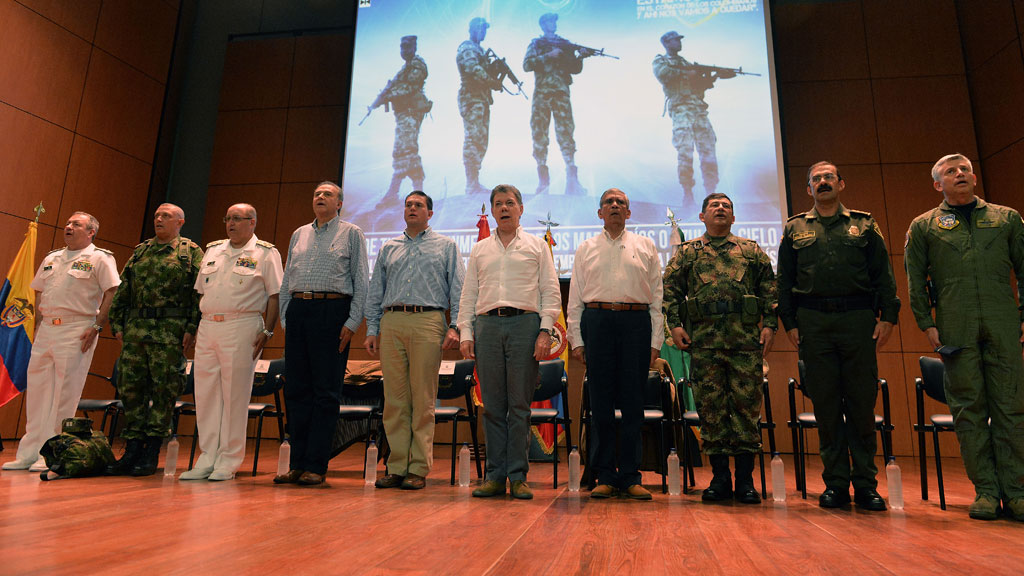 Colombia military ‘will never be obstacle for peace’

Commanders of Colombia’s Armed Forces on Tuesday reiterated the military’s support for ongoing peace talks between the government and the country’s largest rebel group, the FARC.

The Armed Forced commander and the commander of the Air Force stated that members of the military are fully committed to the peace talks, during a press conference held by President Juan Manuel Santos.

Rodriguez continued by saying that “all soldiers and policemen of the country have been prepared to win the war and, in fact, we (officials) won that victory because, as stated by the President, the victory for any soldier and policeman undoubtedly is peace.”

In addition, Air Force Commander Guillermo Leon expressed his support for the peace and dismissed any rumors of a divisions within the security forces over the peace talks.

“It would be a huge mistake to let fracturing the cohesion that we must unite. It takes Military Forces together with National Police to defence our country and consolidate the future of our new generation,” said Leon.

The conference held at the Marco Fidel Suarez Air Force Base is part of Santos’ tour of the country’s military barracks to explain the ongoing peace talks with guerrilla group FARC and quell unrest about possible military cuts in the event of peace.

Santos is being accompanied by former Generals Jorge Enrique Mora and Oscar Naranjo, both negotiators at the table of discussion with the rebels in Havana, Cuba.

The peace talks have been ongoing since November 2012 and aim to end more than 50 years of armed conflict between the FARC and the state.