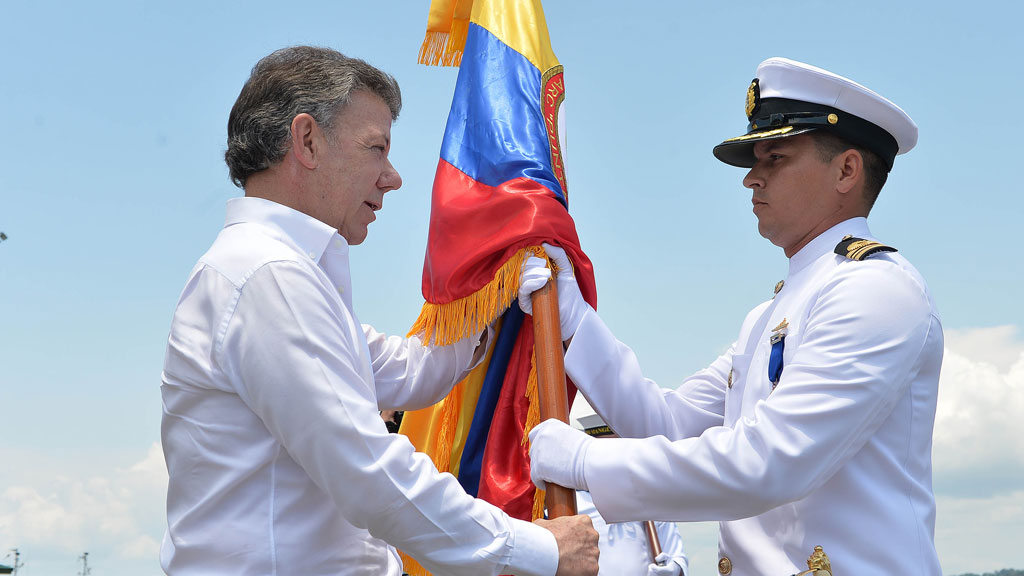 Colombian President Juan Manuel Santos on Saturday began a tour of the country’s military barracks to explain ongoing peace talks with guerrilla group FARC and quell unrest about possible military cuts in the event of peace.

Santos was accompanied by former Generals Jorge Enrique Mora and Oscar Naranjo, both negotiators at the table of discussion with the rebels in Havana, Cuba.

The officials held a press conference from the Larandia Military Fort in the southern Caqueta state, the first location of many on the nationwide tour. The statement addressed several points of controversy that have amounted through recent decision-making of Santos.

Santos firstly denounced the idea that the Colombian forces are in danger of cuts in the event a deal with the country’s largest and oldest-living guerrilla group is signed.

“If I have contributed this much to strengthening the armed forces, how am I going to weaken them?” asked Santos.

“If I was co-responsible – excuse the lack of modesty, but I say it with great pride – If I built these forces and got them to where they are, respected worldwide, with missions as far as Africa; if we built up to arrive at this point, how can they think that I will be responsible for weakening or reducing them?” the President rhetorically asserted.

“On the contrary, what I want is to build on this great asset we have,” stated Santos.

Victory belongs to the army

The Colombian head of state went further in attributing the potential achievement of a peace agreement between his government and rebel group FARC to the armed forces.

“If we reach a peace agreement it is your victory and nobody else’s,” Santos told the military.

“This peace will be your victory and you will go down in history as the members of our armed forces responsible for this historic moment to end the war that has spanned over 50 years,” he affirmed.

The President also addressed the rumors that have been in circulation about proposed abolition of the retirement funds granted to the military, as well as the “reduction of acquired rights and the sacrifice of other benefits.”

Santos declared the speculations — apparently printed in a pamphlet and distributed — “in short, a lot of lies and fallacies that have nothing to do with reality.”

“I am not going to touch the pension system or the benefits that you have earned with your work, your blood and your sweat,” the President assured.

Santos reinforced the point with the example of the existent quota of university places specifically reserved for the children of military members, amongst “a number of other additional benefits.”

“This is why it hurts so much that some people believe these kind of lies,” the President noted.

Retired general and member of the Havana peace talks Jorge Enrique Mora echoed the words of the Colombian President.

“Our future is not in danger; our retirement pay is not in danger; nor is our healthcare, housing, or anything we have ever had. I’m telling you here with all of my heart; I do not see the danger,” the former general emphasized.

Mora’s comments follow recent speculation that he would no longer be in attendance at the Havana peace talks between the Colombian government and guerrilla group FARC.

The former general’s temporary absence — along with that of fellow negotiator Oscar Naranjo — was to allow the officials to accompany Santos on the tour of military garrisons that is currently underway.

The decision led to the resignation of three ex-generals and members of Acore, the association of retired military men which holds a vast amount of lobbying power with the Colombian government.

The officials felt that the Santos’ decision to temporarily remove the officials was “detrimental to the negotiations,” particularly as the talks have reached a “decisive stage.”

However, the Colombian President hit back at this in a statement through his Twitter page on Sunday.

“In what language do I have to repeat that Generals Mora and Naranjo continue to be plenipotentiaries and will be in Havana for the next cycle?” said the tweet.

“I sit at the table with my convictions and arguments in the same way as always,” said the former general.

There has been growing optimism both inside and outside Colombia over the possible outcome of the talks that have been ongoing since November 2012.

The President’s tour will continue onto the Air Force base in Cali and the Tolemaida Military Fort, with the aim to reinforce the Colombian government’s progress in the peace talks.