Three advisers of peace commission member General Jorge Enrique Mora resigned on Wednesday in protest of the general’s future absence in Cuba where talks are held with FARC rebels.

In a letter to President Juan Manuel Santos, retired military officials Luis Carlos Peña, Ricardo Alvarez and Victor Vargas announced their decision to no longer aid Mora in his participation in the talks with the guerrilla group FARC that began in November 2012.

The resigned are members of Acore, the association of retired military men which holds a vast amount of lobbying power with the Colombian government. 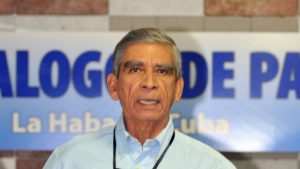 The discontent of the ex-generals follows Santos’ announcement last Tuesday that Mora, negotiator of the talks, would not attend current discussion with the leftist guerrillas.

This is to allow Mora to accompany the Colombian president on a tour of military bases and garrisons across the country, to explain the progress of the peace process as a measure of post-conflict transition.

The tour began on Thursday with a visit to the military unit of Rionegro, with General Oscar Naranjo also in attendance.

The three retired officers described the decision as “detrimental to the negotiations” in their letter to Santos, particularly as the talks have reached a “decisive stage.”

“To separate the table from General Mora at this time, even temporarily., especially when discussing point three of the agenda “end of the conflict,” is something that we cannot understand and we completely disagree with,” stated the communication.

The officials described Mora’s absence as “disconcerting,” and said it was their “duty and obligation to present [their] resignation.”

Peña told Colombian news station Blu Radio that the decision “is not convenient for the process or for the country.”

Santos stated on Tuesday that the two generals accompanying him have not permanently left the negotiating team of the Colombian government in the peace talks in Havana.

He explained that “the presence of the generals and an admiral on active duty has made less necessary the permanent presence of General Mora and General Naranjo.”

However, Santos affirmed that when deemed necessary, the generals will attend Havana.

“For example, General Naranjo is currently in Havana for a specific point of discussion. And General Mora will go to Havana at points that seem to me necessary that he is there present,” said the president on televised program Agenda Colombia.

Similarly, the president stressed that as the peace negotiations progress, procedures can be modified accordingly.

There has been growing optimism both inside and outside Colombia over the possible outcome of the talks that have been ongoing since November 2012.

As part of his tour, the president will this Saturday visit Larandia Military Fort, joint military unit of the Air Force, Army and Navy, located in the rural area of Florence, Department of Caquetá.