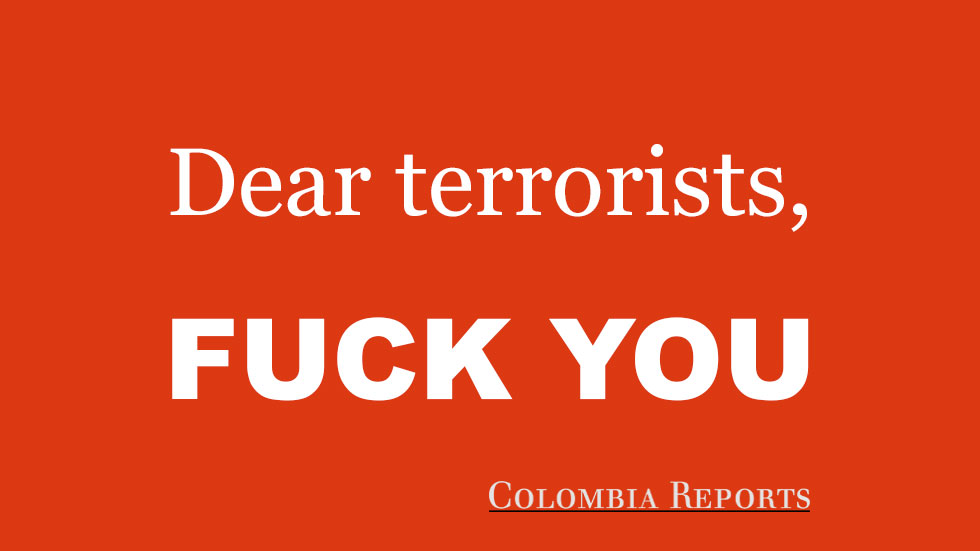 How to respond to Colombia’s latest terror attack

Terrorist acts like the bombing in Bogota on Saturday always have a a political objective. There are ways to make sure you effectively act against terrorism and render it useless as a political tool.

In the case of the bomb in the Andino shopping mall, the purpose can range from derailing the ongoing peace process with the FARC guerrillas to — let’s just guess — pave the way for next year’s elections.

Terrorism is a matter of law and order, not politics

Both primarily and ultimately, terrorism is a law and order issue, a simple matter of “thou shalt not kill.”

I believe most of us agree we don’t want either terrorism or political violence to be an integrated part of politics, especially not after so many deaths and so much suffering of Colombians.

To prevent becoming an unwilling tool for terror and to deter further acts of terror, it is important not to use terrorist provocation or political violence to alter your arguments in political debates or the formation of your political opinion.

When you notice people around you do use terrorism as an excuse to promote politics, just explain mixing crime and politics is a toxic combination and out of line. However, you can’t really blame anyone for being outraged, grieving or feeling impotent, so if anyone fails to do so, just let them.

How to deter terrorism

To deter terrorism, the only thing that needs to be done is to render it useless as a political tool. This is a communal effort in which people on both the left and the right already are essentially united.

In fact, I believe enough Colombians and foreigners understand that terrorism committed in Colombia in the past has only discredited the political purpose of the perpetrators of terrorism and their associates.

Please remember that it took one terrorist act, the killing of Jorge Eliecer Gaitan in 1948, to ignite violence that to date has killed more than half a million Colombians since the beginning of “La Violencia.”

The social and political debates we have been having in Colombia about the FARC, Uribe, peace, truth and justice have been fierce, but entirely legitimate and normal for any country, just look at the UK or the US.

For this reason, all Colombia’s political parties from the Communist Polo Democratico to the hard-right Democratic Center have been overtly adamant and unanimous in rejecting the terrorist plot.

Exposing and confronting the apologists

Unfortunately, not all politicians, pundits and media have done the same, particularly because they have entirely different interests than you and I as civilians and apparently do not share our sense of common decency.

This is where we, as civilians must take action, either by letting these politicians, pundits or media know we reject their use of terrorism for political purposes, file a criminal complaint or alert the media

Colombia Reports will be looking into these illegal, political and media forces. If you notice any group, politician or media outlet politicizing this act of terror, you can actively help either by sending us evidence or report it in our editorial board on Facebook.

We will actively seek to expose any public entity or personality seeking political benefit from terrorism, but we can only do this based on evidence, not prejudice, supposition or speculation.

Refrain from stigmatizing the freedom of expression

With the exception of calmly reminding others that terrorism is a crime and should not be mixed with legitimate politics, we must uphold the freedom of speech.

Stigmatizing legitimate political opinions because some extremist group coincidentally shares them is false and not enforcing the barrier we want to erect between politics and crime.

More than anything, it is important that we maintain the social and political debate we were having before Saturday, not be radicalized or allow debates to escalate to the point they lose legitimacy.

I am immediately unblocking every person who has ever been blocked from the Facebook page to make sure everybody can join in the debate. At the same time, I will strictly moderate the comments on both the website and Facebook based on two standards: No “fake news” BS and no political exploitation of terror.

This is where we all must draw the line and actively promote the rule of law.