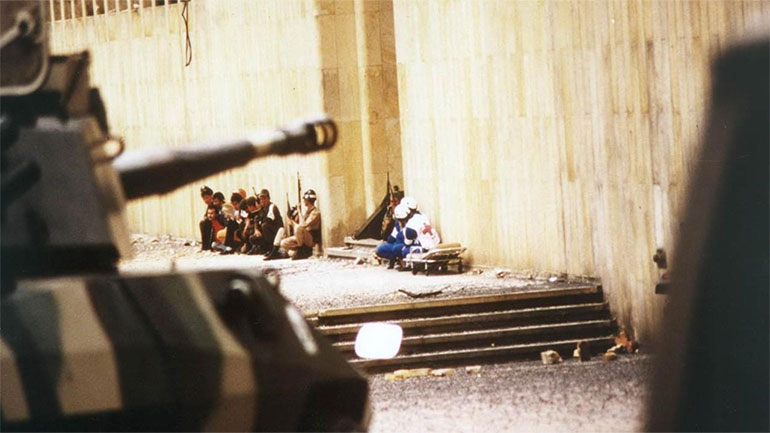 Thirty years after one of the greatest traumas in Colombia’s recent history, prosecutors were able to identify the remains of three women who were disappeared in the 1985 retake of the Palace of Justice that had been occupied by guerrillas.

The victims — Cristina del Pilar Guarin, Lucy Amparo and Luz Mary Portela — were among 11 people who vanished after the military violently retook the Justice Palace a day after M-19 guerrillas captured the building on November 6, 1985.

In the dramatic rebel attack a small group of guerrillas held hundreds of lawyers, judges, and Supreme Court justices hostage and demanded that the president be put on trial.

The government refused to bargain and soldiers surrounded the building. They eventually stormed the site with armored vehicles, and some 100 people died in the ensuring battle, including 11 magistrates.

The building was gutted by fire and piles of court documents went up in flames.

The incident to this day remains highly controversial, notably on the point of whether or not deceased drug lord Pablo Escobar financed the attack.

Of the three victims, two worked in the building cafeteria while the third was a frequent visitor.

The remains of two of the women were found in common graves at two Bogota cemetaries, while Amparo Oviedo’s remains were found in “two boxes held at the attorney general’s office.”

Separately, in September 2014, prosecutors identified the remains of two female M-19 rebel fighters who vanished in the fighting. Eight people however are still unaccounted for.

The M-19 guerrillas, formally known as the April 19 Movement, reached a peace agreement with the government in 1990. The mayor of Bogota, Gustavo Petro, is a former M-19 member.

Currently there are two active guerrilla groups in Colombia: the Revolutionary Armed Forces of Colombia (FARC), with some 8,000 fighters, and the National Liberation Army (ELN), with some 2,500 fighters.

The FARC and the government of President Juan Manuel Santos have been engaged in peace talks in Cuba since November 2012. On Saturday they agreed on ways to search for and identify missing victims of the decades-long conflict.