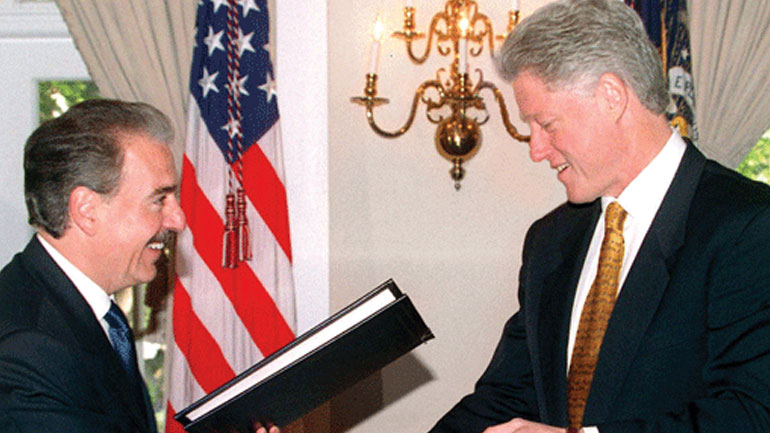 The Plan, originally drafted under former Colombian President Andres Pastrana and US President Bill Clinton, has failed to remove Colombia of its questionable title as the world’s top cocaine producer.

Furthermore, it has contributed to a number of major displacement crises and an abundance of human rights violations throughout the 15 years.

At the same time, however, Plan Colombia has brought unprecedented security gains to important regions of the country, facilitates significant economic growth and has been critical in bringing the FARC guerrillas to negotiate an end to more than half a century of guerrilla warfare against the state.

The first Plan Colombia was passed into law by US Congress in July 2000. The original intent was to offer US assistance to Colombia’s government in its fight against drug trafficking, which at the time had become a threat to the very existence of Colombia as a functional democracy.

In its first iteration, the US offered support to help Colombia face its “drug emergency” and achieve an “obtainable” 50% reduction in coca cultivation over a five-year time period. This objective was never achieved. Between 2000 and 2014 coca cultivation did drop, but 18%.

The plan also called for strengthening state security forces to consolidate state presence and authority in the southern coca growing region that had mostly fallen in the hands of radical leftist FARC and ELN guerrillas who used the drug trade as one of their primary sources of revenue.

By 2002, the Bush administration, operating within the post-9-11 “war on terror” framework, redirected counter-drug aid against the leftist guerrillas who had been on the United States’ foreign terrorist list since 1997.

With US support and following a strategy designed by the US Southern Command and Colombian generals, Pastrana’s successor Alvaro Uribe, elected in 2002, began the “Democratic Security” offensive that pushed back the guerrilla from heavily populated areas of the country and achieved a series of security improvements.

Additionally, between 2003 and 2006 Uribe demobilized the far-right paramilitary umbrella organization AUC thats since their foundation in 1997 had become an even greater player in the drug trade than their Marxists enemies. By 2001, the AUC itself had been put on the US’ terror list.

While the original plan called for the creation of economic alternatives to the drug trade for the country’s coca growers, 75% of the original $860 million aid package went to the military and security forces, according to numbers compiled by Security Assistance Monitor. Through 2000 to 2007, the US regularly delivered over $600 million per year and by 2016 the program had cost the United States government close to $10 billion.

The US-backed military offensive spurred one of the worst humanitarian disasters in the history of the conflict as the violence intensified and generated millions of internally displaced.

A central component of Plan Colombia from the start was aerial spraying coca fields with herbicide. The controversial tactic had already been applied on a small scale before Plan Colombia, but after the agreement was signed, its usage skyrocketed with nearly 33% of US aid between 2000 and 2007 going to support aerial fumigation.

By 2008, accusations and proof of human rights violations carried out on a massive scale by Colombia’s military, combined shifting power in Washington, led the United States to scale back military aid while increasing and institutional and economic aid.

In 2015, Colombia’s said it would end aerial fumigations after studies found it to have carcinogenic effects on farmers who came into contact.

Coca cultivation, while falling for a few years up until 2013, has shot up again and continues to climb upward. As a result, Colombia has passed Peru as the world’s top coca producer once again.

In the meeting Thursday, Santos will ask Obama for an increase in US economic and institutional aid that will be used to build infrastructure and social programs for isolated zones of the country that have been hit the hardest by the 51-year-old conflict.

Plan Colombia has undisputedly contributed to strengthening Colombia’s state apparatus, economic growth and a major drop in violence, even if it failed its initial objective to seriously disrupt the country’s flow of cocaine to the United States and has come at a major humanitarian cost.

Most importantly, the policy has helped create the conditions for peace talks between the Colombian government and the FARC and ELN who, thanks to the US support, have been decimated since Pastrana and Clinton first signed the agreement.