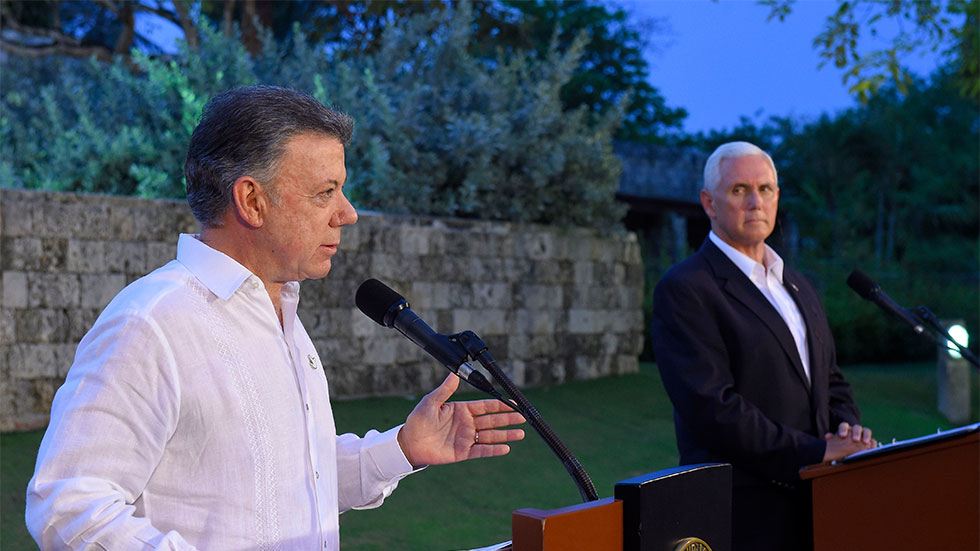 The United States’ Vice President Mike Pence arrived in Colombia trying to unnerve tensions about possible US military intervention in an ongoing crisis in neighboring Venezuela.

Pence arrived in the coastal city of Cartagena, just days after Trump had said the US considers military intervention in Venezuela, Colombia’s neighbor to the east.

Colombia and a number of other traditional allies of the US in the region rejected the possibility of military intervention and have insisted on dialogue and diplomatic action.

Tensions between Colombia and Venezuela have been high after President Juan Manuel Santos’ rejected the outcome of an allegedly fraud-ridden Venezuelan vote that effectively sidelined the opposition-dominated National Assembly.

Santos and a dozen other regional leaders have urged the Venezuelan government and opposition to engage in dialogue to solve the crisis that is causing a lack of food products and health care for the Venezuelan people and mass migrations to neighboring countries.

At the end of his meeting with Pence, Santos couldn’t wait to stress his administration’s rejection of possible US military intervention in the neighboring country.

After briefly stressing his fierce condemnation of the “destroying of liberties and institutional order” in Venezuela, Santos immediately stressed his equally firm rejection of Trump’s recent threat.

As friends you have to tell each other the truth. I told Vice-President Pence that the possibility of a military intervention may not be considered. Neither Colombia nor Latin America — from the Rio Sur to Patagonia — could agree. The Americas is a continent of peace. Let’s leave it that way.

Pence’s response was politically savvy and diplomatically ambiguous, unlike Trump’s comments that spurred the rift between the US and its allies.

While the US VP failed to explicitly rule out US military intervention and the effective toppling of the government of President Nicolas Maduro, Pence stressed Washington’s will to work together with Latin American allies.

Pence stressed that the US has so far used mainly diplomatic and economic pressure in its attempts to curb Maduro’s power and that it will continue to prioritize its alliance with the countries opposing US military intervention.

You can be assured, Mr. President, we will continue to take action until the Maduro regime restores democracy, holds free and fair elections, releases all political prisoners and ends the repression of the Venezuelan people. As President Trump said a few days ago: “We have many options for Venezuela.” And the president also remains confident that working with all of our allies across Latin America we can achieve a peaceable solution to the crisis facing the Venezuelan people. Working with free nations across this hemisphere the United States will continue to bring the full measure of American economic and diplomatic power until democracy is restored in Venezuela.

Pence will stay in Colombia for two days after which he will continue to visit other regional allies that have rejected Trump’s mentioning of a possible military intervention.