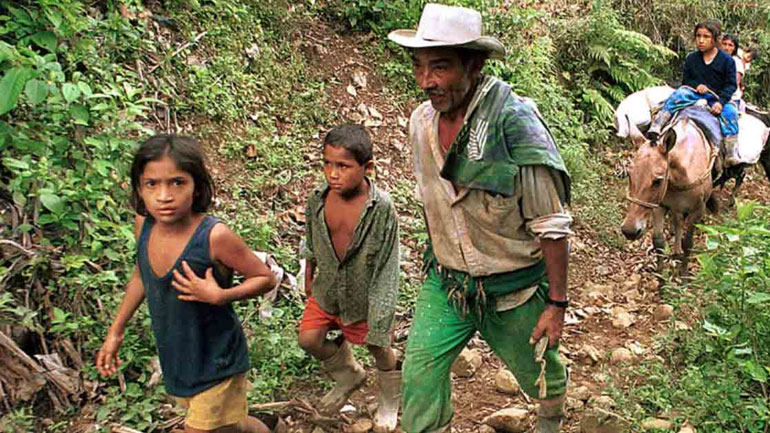 Ranchers who allegedly used paramilitary death squads to steal lands by displacing its rightful owners are now saying they are victims of the government’s land restitution program. Returning farmers say they again are receiving threats.

The tensions between the ranchers, their political allies and farmers has escalated to the point that the farmers claim the ranchers again teamed up with death squads to make sure they get to keep their illegally obtained lands.

Meanwhile, the ranchers, each of whom is investigated for ties to the now-defunct paramilitary organization AUC,

The agricultural plots lie in the Magdalena Medio area where AUC commander “Jorge 40” ruled until his demobilization in 2006 and where more than 1,000 families were displaced by Jorge 40’s paramilitary Bloque Norte.

It was in this area where ranchers, politicians and paramilitary commanders agreed to “refound the motherland” by killing anyone considered leftist and the displacing farmers whose land was then sold cheaply to the wealthy ranchers.

The “Pact of Ralito” and the “Pact of Chivolo” between paramilitaries and politicians ultimately led to the incarceration of many dozens of congressmen, more than seven governors and an unknown number of local politicians.

According to the prosecution, more than 10,000 politicians, ranchers, businessmen and public officials used paramilitaries for their political or commercial gain.

In spite of their major issues with justice, the ranchers claim they bought the land “in good faith” and are the rightful owners of the properties.

But the farmers, the justice department and the Unit for Land Restitution disagree. They say the wealthy ranchers are nothing but criminals.

According to the farmers who want to return to their lands, the ranchers have again teamed up with paramilitary forces, this time under the leadership of former AUC member “Tuto,” who have begun a new era of terror.

Fortunately for the wealthy ranchers, their ties to national politics have not dried out completely and they were able to convince Inspector General Alejandro Ordoñez to hear their complaints of being the victim of “state displacement.”