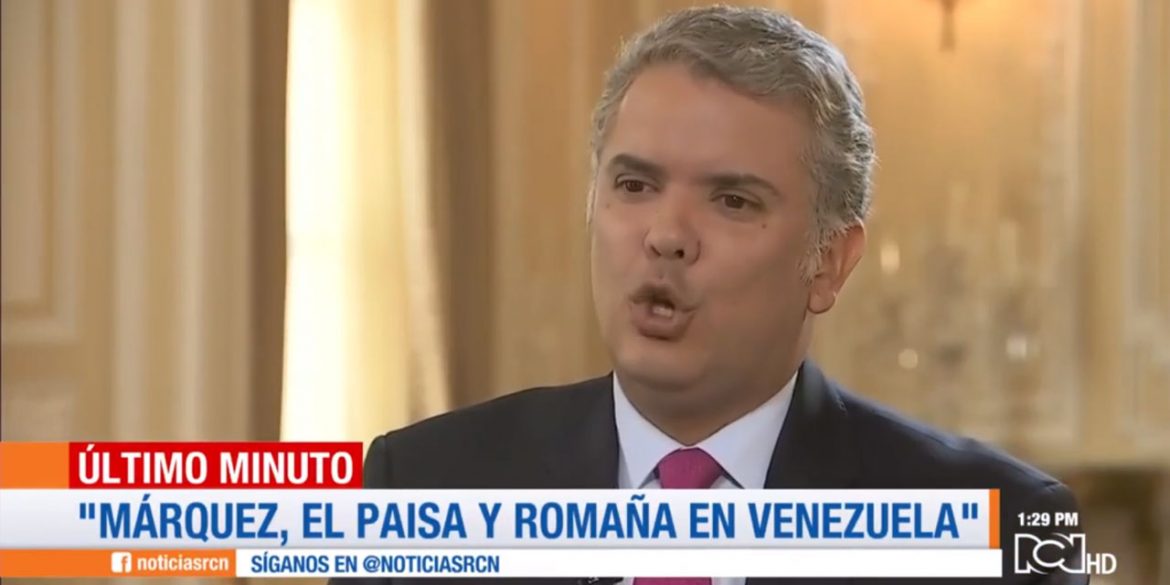 Colombia’s President Ivan Duque said Tuesday that three missing FARC leaders are in Venezuela under the protection of “the dictatorship of Nicolas Maduro.”

In an interview with conservative television network RCN, Duque claimed that the FARC’s political leader, “Ivan Marquez,” and two feared former mid-level commanders, “El Paisa” and “Romaña,” are Venezuela, but provided no evidence.

According to the president, “I believe that Jesus Santrich,” the FARC congressman who disappeared last month, “is being protected in Venezuela.”

He did not present himself when he was summoned by justice and, because of the proximity of that place where he was, he quite surely is in Venezuela today with the protection of the government.

Duque’s speculations echoed reported Military Intelligence sources claiming Santrich fled from a FARC reintegration site in the northern Cesar province to Venezuela to meet up with Marquez and members of the ELN, the country’s last-standing guerrilla group.

Over there in Venezuela are Ivan Marquez, El Paisa, Romaña and they are not playing with dolls over there, they are protected by the dictatorship of Nicolas Maduro.

Duque went on speculating that the three FARC leaders who went missing last year are “resuming conversations that are linked or possibly linked to criminal acts.”

Since he abandoned his security detail, Santrich appeared to have gone up in smoke with no indication where he may be, or whether he is dead or alive.

Marquez, a close friend of the FARC’s former ideologue, stopped all activity on Twitter on the day that his friend escaped his security detail.

According to the FARC, Romaña was last seen near the border of the Norte de Santander and Arauca provinces, close to the Venezuelan border, allegedly trying to protect himself from dissident FARC groups that were trying to kill him.

Media reports previously claimed Romaña and El Paisa were in the southwest of the country, but these claims were disputed by sources consulted by this website.

While it is uncertain whether any of these leaders are in Venezuela, what is certain is that all are at odds with “Gentil Duarte” and “Ivan Mordisco,” the former mid-level guerrilla commanders who rejected the peace process since the beginning and have since led the FARC’s most powerful dissident faction.