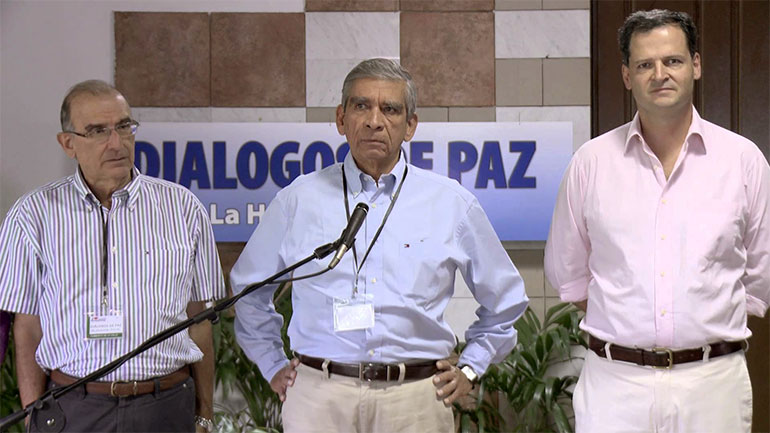 Colombia military negotiator ‘walks out of meeting with war victims’

The military representative at peace talks with leftist FARC rebels, General Enrique Mora, walked out of a meeting with victims who had been invited to surrender evidence on forced disappearances, the victims said Friday.

The three victims had been invited to present a list of recommendations on how to locate, identify and return the bodies of the tens of thousands of people who have gone missing during the conflict.

However, the victims returned from Havana, Cuba with a bitter taste in their mouth, claiming the government official in charge of locating missing persons, ombudsman delegate Alfonso Cajiao, “notably is a person who is not familiar with the deals [regarding the search for missing war victims] nor with forced displacement.”

“I was very disappointed with that,” said Adriana Arboleda of the Judicial Liberty for Human Rights foundation.

According to Yanette Bautista, the sister of disappeared M-19 member and economist Nydia Erika Bautista, the meeting turned even more sour when fellow-victim representative wanted to present the results of a study on forced displacement, a war crie committed on numerous occasions by a variety of armed actors.

“While Gloria Gomez, our colleague who worked at Asfaddes, General Jorge Enrique Mora, the negotiator who represents the military.., stood up from the table, said something in the ears of [chief government mediator] Humberto de la Calle and [Peace Commissioner] Sergio Jaramillo, and left.”

“The meeting was set to be held without interruptions, but once Gloria finished talking, De la Calle asked for a recess. When we returned to the room to continue our intervention, the general didn’t come back,” said Bautista.

This is the second time that the military negotiator is the center of controversy as the limelight is put on war crimes committed by the military.

The family of Jaime Garzon, a journalist and comedian who was killed by paramilitary forces in 1999, reiterated accusations last year that the general was implicated in one of Colombia’s conflict most traumatic political killings.