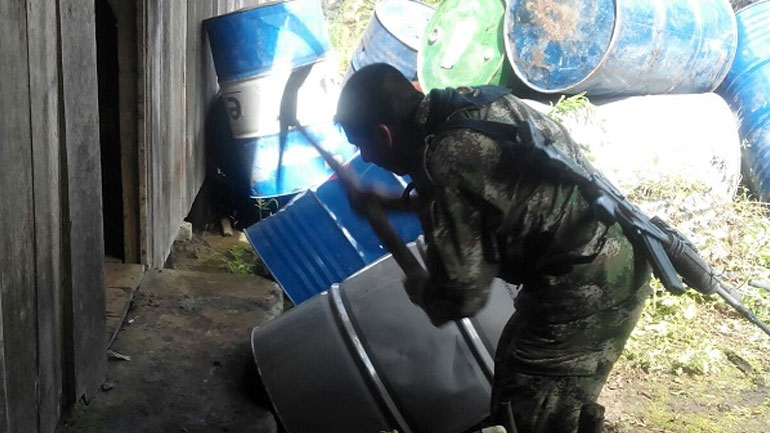 A massive cocaine laboratory able to produce seven tons of cocaine a week was discovered and destroyed in the southwest of Colombia, the military said.

“In Samaniego we found a gigantic coca complex with an estimated worth of more than 10 billion pesos ($3.4 million) belonging to the ELN,” the country’s second-largest leftist rebel group, the military said in a press release.

According to the military, the laboratory had the capacity of producing “more than seven [metric] tons of cocaine per month” and was able to shelter some 50 workers.

However, when the military raided the site, no suspected worker was found, presumably because the lab was abandoned just before the authorities moved in.

The lab was located in Nariño, one of Colombia’s main coca growing regions and bordering both the Pacific Ocean and Ecuador.

The jungle complex is by far the biggest one found so far this year.

A major lab allegedly run by neo-paramilitary group “Los Urabeños” in the northwest of the country that was dismantled in July had the capacity to produce between two or three tons a month.

The most recently destroyed lab allegedly belonged to the ELN’s Comuneros del Sur Front that is active in the region, alongside the country’s largest rebel group, the FARC, and a number of other organizations involved in the drug trade.

Colombia’s annual cocaine production is estimated to be around 487 tons by the United Nations’ Office on Drugs and Crime.

The ELN, which depends largely on drug trafficking to fund its 51-year-long war against the state, is estimated by authorities to consist of some 1,500 to 2,000 fighters.

The group has been engaged in exploratory peace talks with the government since before June 2014, but has yet to agree to a formalization of these talks which would result in the group’s demobilization and the reintegration of its fighters.