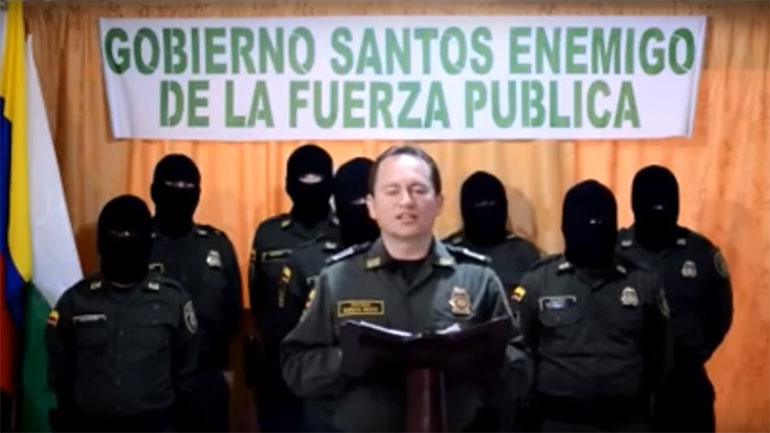 Colombia’s National Police was embarrassed on Sunday when a video appeared of a former patrolman who, surrounded by what appear to be masked policemen, called President Juan Manuel Santos an “enemy of the security forces.”

The police immediately suspended the patrolman and begun investigations into the identity of the masked men.

In a speech of more than an hour, Rozo complained about the mistreatment of lower-ranked policemen and the Colombian government’s lack of commitment to the well-being of its security officials.

Backed by a banner that said “Santos administration enemy of the security forces,” Rozo rhetorically asked “until when are we going to allow these abuses? How many decrees must be declared void by the State Council? Until when are they going to deny acquired rights?”

“What we want is that our rights are respected … I am willing to give my life,” the patrolman said.

According to weekly Semana, hardly anyone within the police was willing to speak about the video.

But according to one police source consulted by the magazine, Rozo and his masked colleagues expressed a discontent that is widely spread among police officers.

“He says things that have a lot of substance. There are problems with promotions that often are granted for the whims of the higher command. There are serious problems with the level of salaries and even more with pension rights,” the anonymous source said.

The video is the second time that the institution is profoundly embarrassed within two weeks; last month National Police commander General Rodolfo Palomino was accused of having sexually harassed a male subordinate.