Communities living near demobilization camps for FARC guerrillas have claimed the chaotic demobilization and disarmament of the group proves the government is hardly committed to properly implement the peace deal.

Both the FARC and the United Nations have complained frequently, and publicly, about the government’s failure to provide decent living conditions for almost 7000 rebels in the special demobilization zones.

The FARC tweeted a map which shows zone by zone how much the current state differs from what the government pledged in the peace deal signed in November. 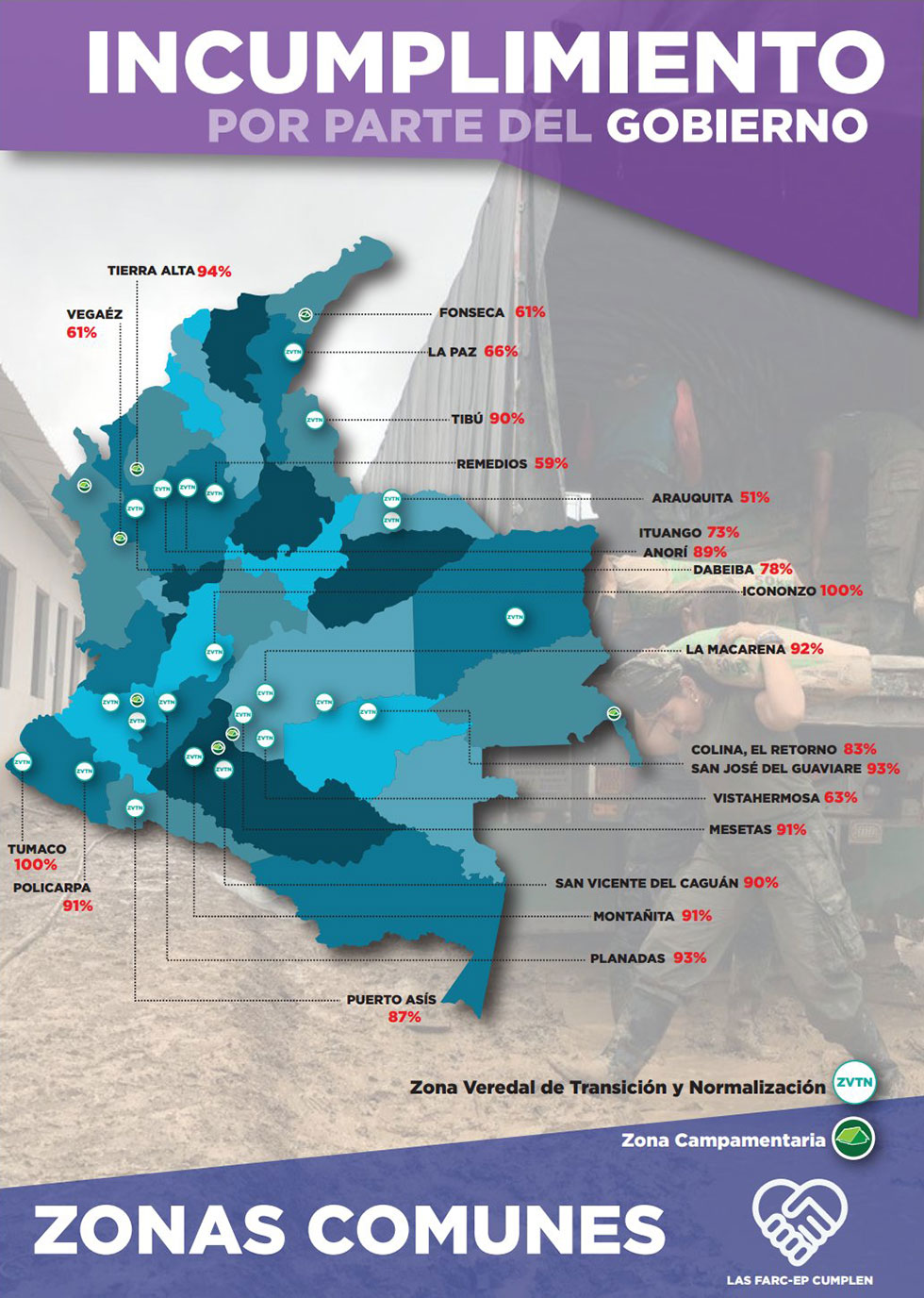 According to the map, 22 out of the 26 demobilization zones are plagued by delays. In 11 of them the government failed to deliver 100% of its promises.

A string of unforeseen events complicated the construction of the demobilization zones.

Some land owners wanted to charge higher land rental than they should, and in Norte de Santander province, locals blocked the guerrillas’ demobilization, claiming paramilitary groups were threatening coca growers.

In Tierralta, Cordoba, the construction works didn’t start until January due to an outbreak of malaria, the manager of the demobilization zones, Carlos Cordoba, told website Pacifista.

Moreover, boatmen who control the passage through the dam of Ituango, have refused to transport construction materials demanding more pay.

However, the government blamed much of the delay on the FARC’s whims.

“In many camps, the FARC commanders did not allow the progress of the works, making demands that do not correspond to what was agreed upon. Perhaps the most notorious case was that of Tumaco, where the local commander repeatedly blocked suppliers from entering,” the High Commissioner for Peace, Sergio Jaramillo, said on Monday.

Cordoba assured that in Tumaco the FARC demanded two sports centers, an audiovisual studio, and 12 brick offices with air conditioning for commanders, in order to allow the works to begin.

The FARC denied it had ever made this kind of demands.

“We do not ask for luxuries, we only ask that the government delivers on its promises,” said FARC leader ‘Pastor Alape’. He added that Cordoba was lying in order to conceal his mismanagement of the demobilization zones.

“There are breaches in 87% of the agreement, a figure that contradicts that of the government,” said another FARC leader, alias Carlos Antonio Lozada.

Meanwhile, the communities around the demobilization zones worry about what the delays mean for their own security.

“We are afraid that the failure to deliver on promises will reverse the progress made by the (peace) agreement,” a leader of Vigia del Fuerte community said at a Medellin forum with community leaders from the surrounding Antioquia province and the government on Thursday.

The communities in Antioquia believe that what is happening in the demobilization zones indicates the lack of the commitment and compliance on the side of the government.

Leaders from Remedios, Anori, Dabeiba, Vigia del Fuerte and Ituango said narco-paramilitary groups filled in the vacuum left behind after the FARC. They threaten the communities in the vicinity of the demobilization zones, claiming to be the new law in the region.

The government pledged in the peace deal to take control of guerrilla territory. However, local officials have told Colombia Reports and other news outlets this is happening too slow and hardly efficiently.

“The arrival of the FARC in the demobilization zones reflected the abandonment of rural Colombia,” said Ernesto Pinzon, a member of the Human Rights Commission of the peasant organization Cahucopana.

The chronic neglect by the state of Colombia’s countryside has been named as one of the main causes of the armed conflict and should be improved as part of the government’s concessions in the November peace agreement.