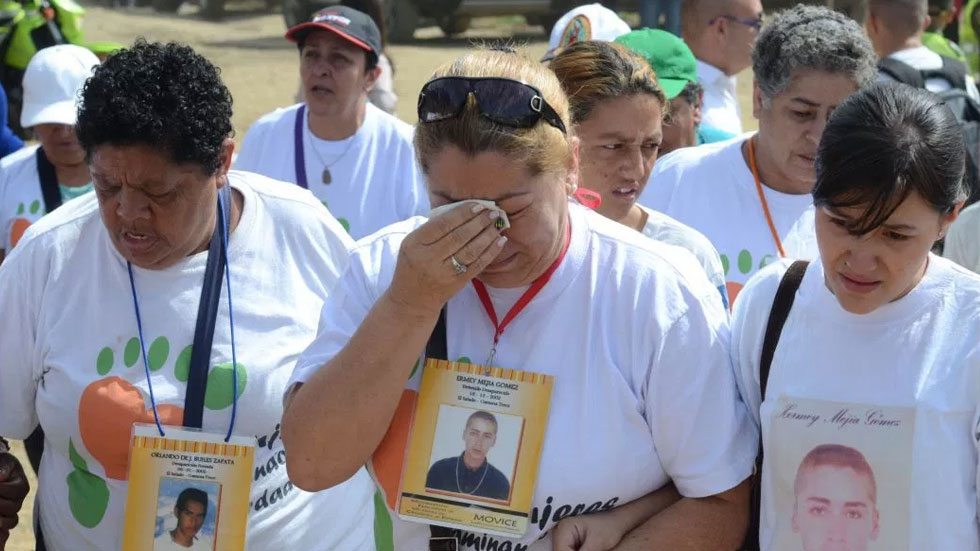 With at least 23 social leaders killed in three months of peace with the FARC, community leaders are terrified they are at the dawn of a wave of paramilitary violence not seen in Colombia since the 1990s.

The daughter of survivors of the Patriotic Union genocide that virtually wiped out the socialist Patriotic Union (UP) party in the 1980s and 1990s, did not survive three months of peace with the FARC.

Alicia Lopez, a community leader and farmers’ rights defender, was shot dead in plain daylight in Medellin on Thursday, becoming the 23rd victim of a series of assassinations targeting social and community leaders throughout Colombia.

Last year, 116 of these leaders were assassinated in an ongoing string of assassinations that are terrifying community leaders and their communities alike.

Lopez’ family are among the few survivors of the genocide of the UP, a party that aligned with the FARC to allow the guerrillas to become a political party under a peace agreement with then-President Belisario Betancur.

The current wave of violence seems to target pluralist civilians supporting the communist guerrillas’ inclusion in politics, among other motives.

The Lopez family has repeatedly been threatened and displaced by paramilitary groups because of their social activism, according to the Peoples’ Congress, an organization to which Alicia Lopez belonged.

The family was forced to leave the Medellin’s neighborhood Comuna 13 during a military operation in 2002, in which the army, with the help of paramilitaries, targeted left-wing militias that were controlling the periphery of the city.

Following the assassination, activists expressed outrage after the authorities tried to classify Lopez’ murder as a common homicide.

Her assassination in the Olaya Herrera neighborhood, from where she had been displaced with her family, demonstrates that the organizations that operate today in the city of Medellin are the same paramilitaries who were committing murders in the past.

According to the Peoples’ Congress, rumors spread around Olaya Herrera after the killing that the victim’s mother and sisters are the assassins’ next target.

Lopez lived in the Pacific Choco province. She was in Medellin to work on a project seeking to improve food sovereignty of indigenous and Afro-descendant communities on Colombia’s Pacific coast.

The majority of the perpetrators of the assassinations that have taken place since 2016 are unidentified. In other cases, the killings were either carried out by known paramilitary groups or by the security forces.

One of these assassinations happened on the first day of peace with the FARC already.

Some of the victims of the post-conflict assassinations are believed to have been killed because of their involvement in the execution of the peace deal with the FARC.

Others were displaced farmers demanding the return of their land.

At least two of the 23 peasant leaders killed since the peace deal were members of coca growers’ committees.

As a part of the peace deal, community assemblies are to create plans for voluntary substitution of coca for legal produce. However, the armed groups that are keen to take over the lucrative drugs trade after the FARC, oppose coca substitution and threaten farmers who comply with the plan.

Some of the victims had strongly denounced both the drug trafficking and the paramilitary presence in their area.

In Corinto, Cauca, where multiple assassinations have taken place, social leaders denounced the presence of hooded men and the appearance of graffiti allusive to the Gaitanista Self-Defense Forces of Colombia (AGC), a.k.a. Los Urabeños, the primary heir of paramilitary organization AUC, which officially demobilized between 2003 and 2006.

In January, a pamphlet signed by the officially defunct AUC placed a bounty of  on the heads of social rights workers and indigenous leaders in the department of central province of Tolima, the birthplace of the FARC.

Notwithstanding, Defense Minister Luis Carlos Villegas has vehemently denied the existence of paramilitary groups in Colombia, claiming the groups carrying out the political killings are drug traffickers.

Following the FARC’s demobilization, the military was supposed to take control of guerrilla territory and begin imposing state law instead of guerrilla rule. However, there are indications that what was agreed in the peace deal is not actually happening.

Consequently, a power vacuum has formed, allowing in many rural areas both paramilitary groups and drug traffickers to assume the territorial control.

On February 5, President Juan Manuel Santos announced the military offensive called “Plan Victoria” for the third time, saying that 68,000 soldiers would be deployed in the 160 municipalities considered risk areas.

However, in many parts of the territory chronically neglected by the state, the army is yet to be seen or has only had sporadic movements.