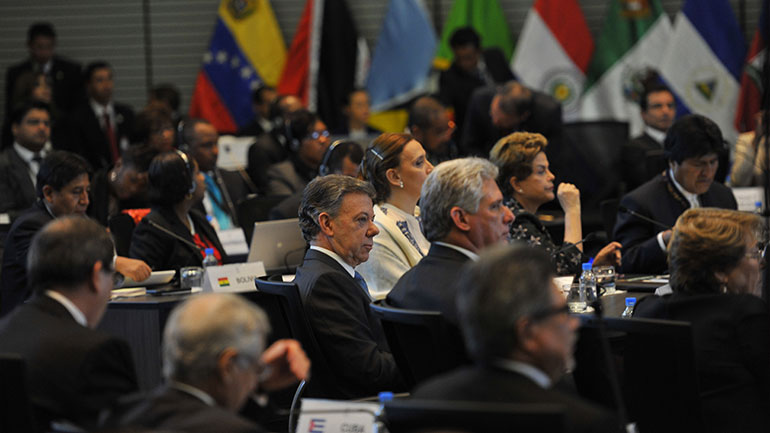 Colombia’s regional neighbors are willing to send representatives for a UN mission to monitor the end of the country’s half-century conflict under a hoped-for peace deal with FARC rebels, leaders said Wednesday.

Leaders at a summit of the Latin American and Caribbean regional bloc CELAC said the mission to oversee an accord between the Colombian government and the Marxist guerrillas would be made up entirely of officials from CELAC countries.

“We are offering CELAC with all its capability to support the verification of the agreement,” said Ecuador’s President Rafael Correa, host of the 33-nation summit in Quito.

Colombia’s President Juan Manuel Santos said the United Nations would choose which countries take part in monitoring the implementation of the deal.

“The United Nations have told us that they have already received offers from a great many countries because many countries are interested in taking part,” Santos told the gathering.

“It could involve any country that belongs to CELAC.”

The UN Security Council on Monday unanimously adopted a resolution that establishes a “political mission” with unarmed international observers, at the request of the two sides.

Peace talks in the Cuban capital Havana between Bogota and the Revolutionary Armed Forces of Colombia (FARC) have made several key advances in recent months.

The two sides have set a deadline of March 23 to sign a final accord — though the FARC has warned “substantial” obstacles could get in the way.

The FARC was launched in the aftermath of a peasant uprising in 1964.

The conflict has killed more than 220,000 people and displaced six million.