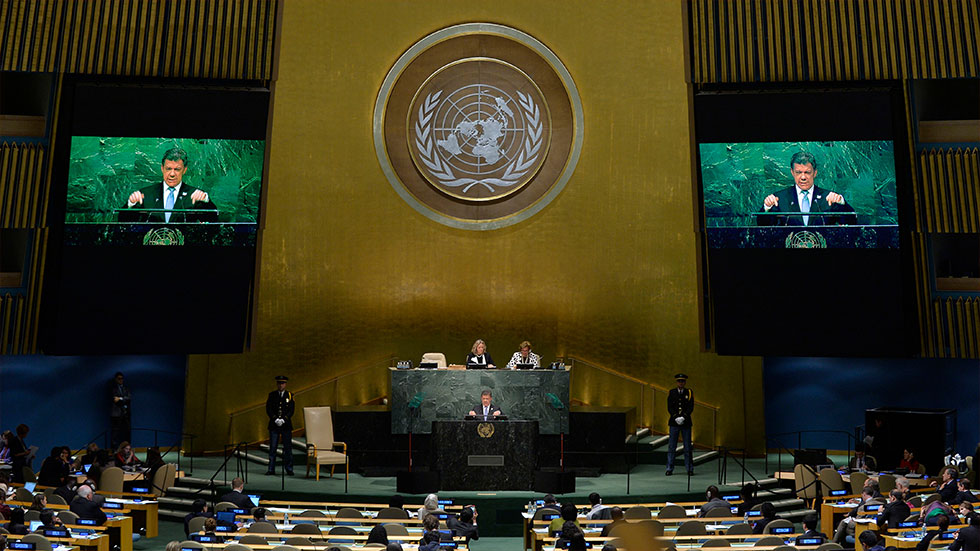 Colombia President Santos and FARC leader “Timochenko” were going to sign peace at the UN General Summit in New York until the US Department of Justice (DOJ) hit the brakes, Foreign Policy reported on Sunday.

Spain’s Prime Minister, Mariano Rajoy, accidentally announced on Wednesday that the ceremony would be held on September 26 in New York where world leaders will be convening for the General Summit.

His claim was quickly denied by Santos who on Friday said the signing would take place on the 26th, but in Colombia’s coastal city Cartagena.

Photo op at UN would be perfect for Santos’ ‘Yes’ campaign

The idea to hold the ceremony in New York would’ve meant a major boost for Santos who, six days after the signing, faces a referendum that could throw the entire peace deal in the bin.

“The ‘No’ vote has at least a chance of winning,” Adam Isacson of the Washington Office on Latin America told Foreign Policy (FP). “So if you had this vote after the big ceremony, then there’s this wave of euphoria that could benefit the ‘yes’ campaign,” the senior Colombia expert said.

According to FP, the idea to invite a FARC delegation to the UN was promoted by Colombia’s Foreign Minister and peace negotiator, Maria Angela Holguin, and supported by both the White House and the State Department.

Inviting alleged drug traffickers to the US

The DOJ, however, protested after years of trying to get FARC leaders to respond to charged of drug trafficking and the kidnapping of three military contractors, reported FP.

While nobody within the department would go on the record, the DOJ’s alleged objections were echoed by Robert McBrien, a former Justice Department lawyer and retired associate director for the global targeting division of the Treasury Department’s Office of Foreign Assets Control.

“These are people we would work very hard to bring to the U.S. to prosecute. To let them come in and sign an agreement and then fly away, I find very hard to accept.”

On top of the DOJ’s disapproval, the US “could not guarantee visa issuance,” an anonymous UN-based diplomat told the Washington DC magazine.

A senior Colombian diplomat, Carlos Arturo Morales, told FP that the “schedule was a little bit too tight” for the US government to grant temporary immunity to wanted FARC leaders and fly a batch of Colombian officials, former guerrillas and press to New York City.

So instead, the ceremony will be held in the much more picturesque, but much less prestigious Cartagena, reportedly much to the disappointment of the Colombian government, the White House and the State Department who have all made efforts to secure the deal.

The FARC, which is expanded to disband as an organization days before the peace ceremony, was put on the US’ list of foreign terrorists organizations in 1997.

A significant number of FARC members additionally face criminal charges for trafficking cocaine to the US.

Leader Timochenko, for example, is wanted because he has already been indicted for drug trafficking.

If the Colombian people approve the peace deal, guerrillas suspected of serious violations of humanitarian law or war crimes will have to face a transitional justice tribunal.

Those not suspected of atrocities will receive amnesty and be reintegrated into Colombian society while their leaders prepare to begin a political party.