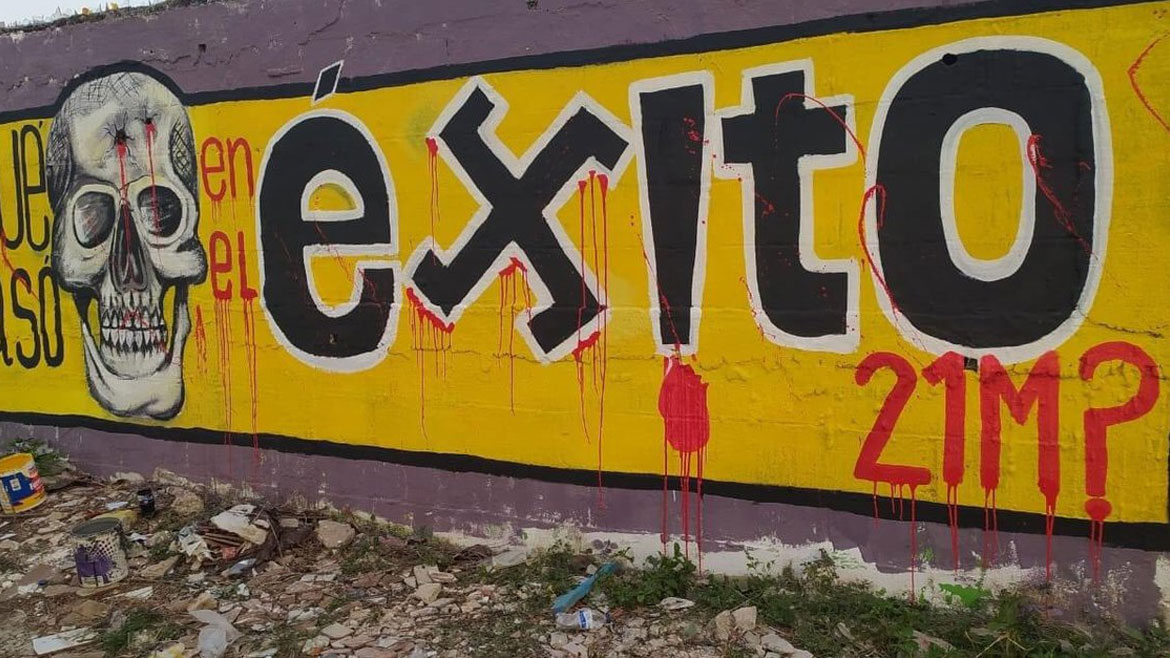 Authorities are reluctant to investigate evidence indicating that Cali police and Colombia’s largest supermarket chain Exito conspired to cover up crimes against humanity.

The accusations followed a night of violence that left one woman dead and 17 people injured in the area around the Simon Bolivar supermarket in the  Calipso neighborhood in Cali on May 19. 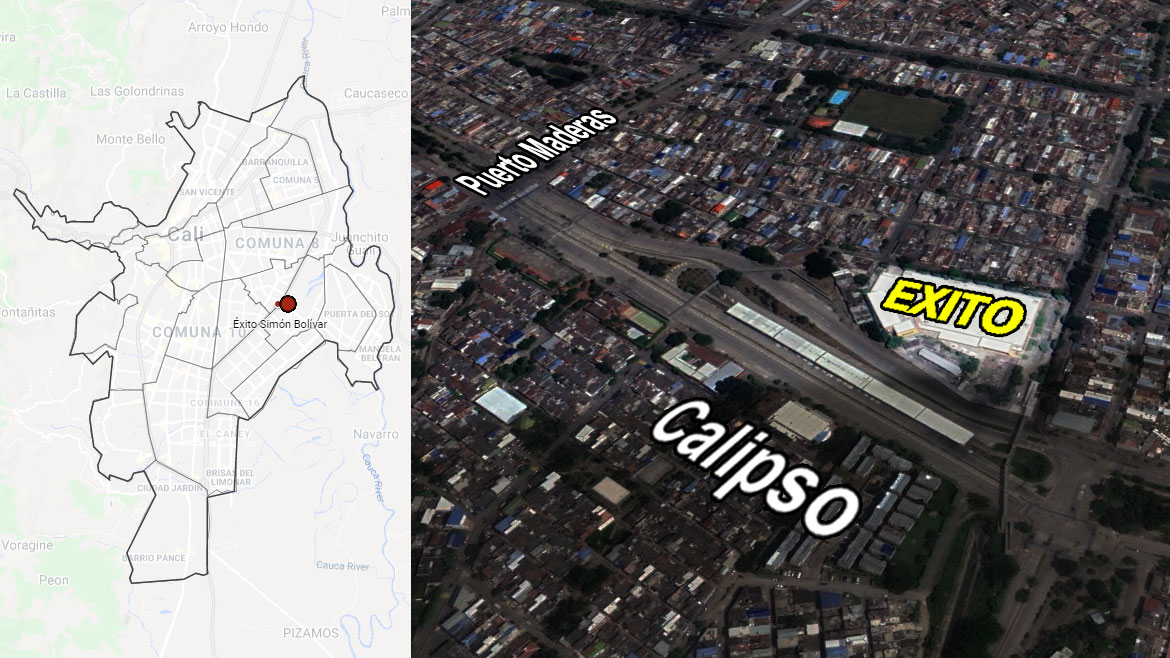 The Cali Police department denied using the Exito as a police operation center and the supermarket chain has fiercely denied its Cali branch was used as a “torture center.”

Facebook has censored news about what locals now call the “Apocalipso” supermarket because one of Facebook Colombia’s news moderators, website La Silla Vacia, branded the it as “fake news.”

Exito is one of the biggest clients of the family business of La Silla Vacia owner Juanita Leon, whose political website on multiple occasions branded news as “fake” without verification.

The problem is that the locals’ claims are corroborated by evidence and multiple independent news outlets.

Juanita Leon, the media godmother who is killing press freedom in Colombia

The protests that kicked off on April 28 were a major problem for President Ivan Duque who refused to talk to protest leaders about anti-poverty measures in response to the crisis caused by the coronavirus pandemic.

A solution to this crisis was particularly urgent in Calipso, which lies on the border of “Black Cali,” the historically marginalized southwest of Colombia’s third largest city.

Few people from southwest Cali can afford shopping at Exito as Cali’s black minority has always been poor.

This got worse over the past decades because of the arrival of displaced people from the Pacific coast and became virtually untenable during the pandemic.

While anti-government protesters began protesting in the neighboring Puerto Maderas neighborhood on April 28, people from the impoverished 13th District around Calipso took to looting the supermarket.

Police were filmed inside the Exito that day, but were unable to do much as some of the looters were armed and presumably members of one of the many gangs that control the southeast.

Looters attacked the supermarket again in the evening of May 2, this time without any police intervention. 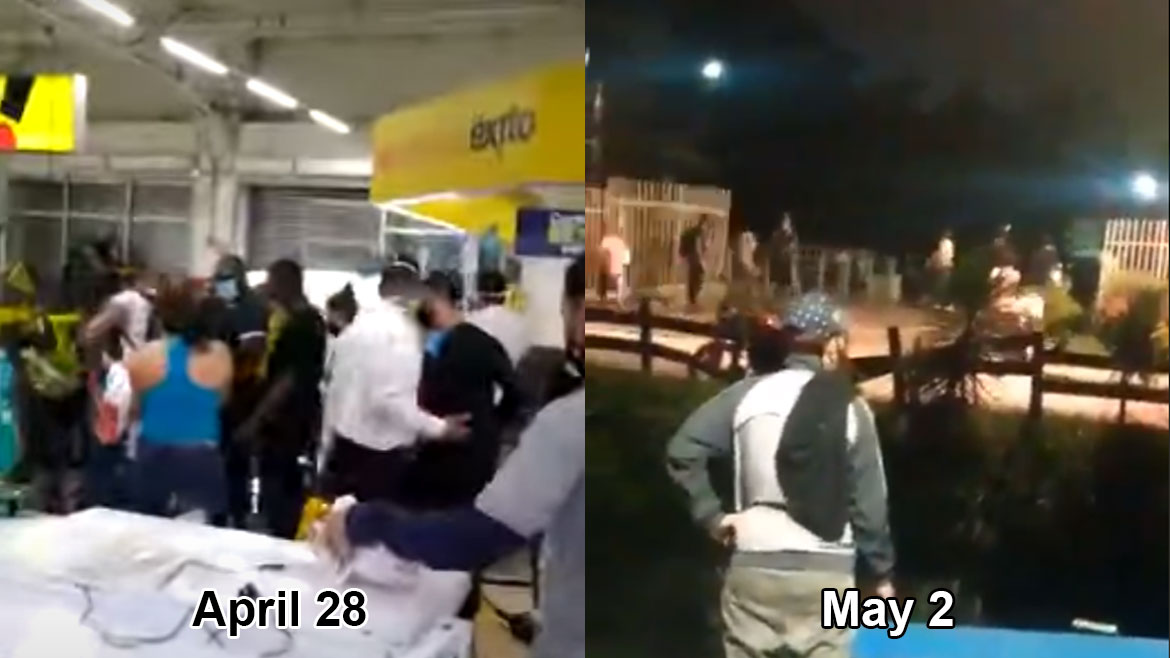 As the protests persisted, Cali police seemed busier violently cracking down on peaceful protests in Puerto Maderas than maintain public order in Calipso.

Neighborhood gangs took advantage and began tightening their control over the neighborhood, subjecting locals to escalating violence and vandalism.

Hospital records obtained by independent television network Canal 2 confirmed an increase in victims of apparent police brutality in Puerto Maderas and violent crime in Calipso between May 15 and May 17. 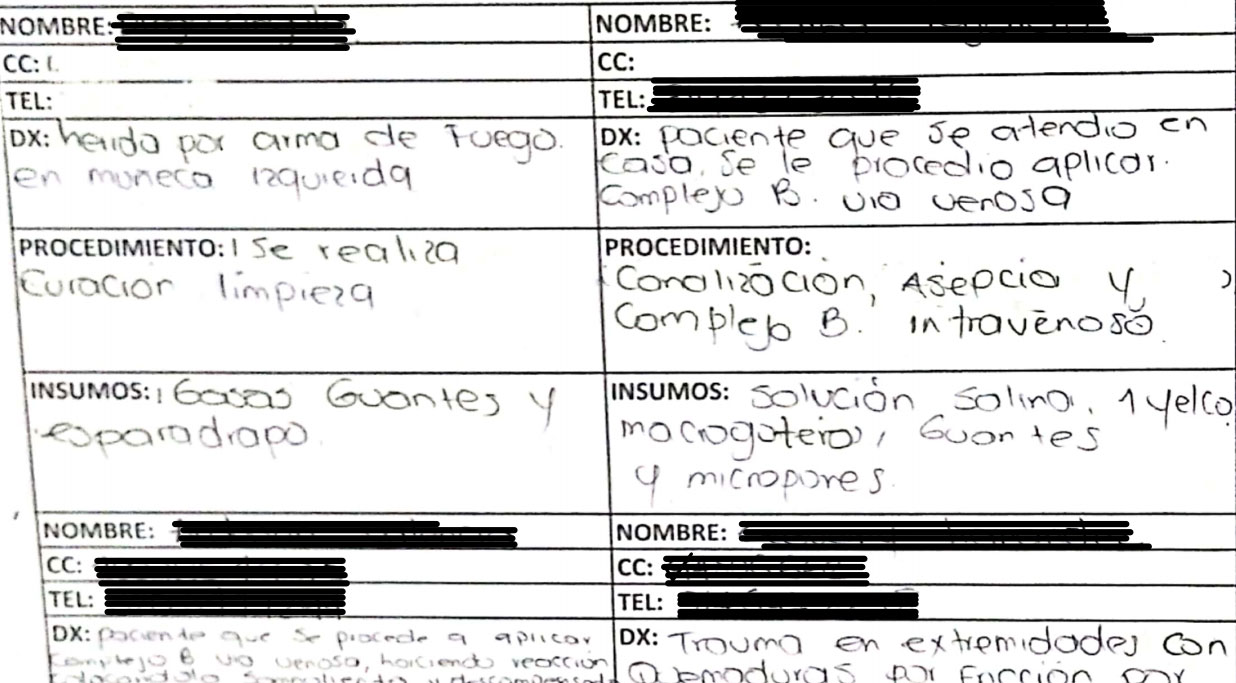 On May 18, Canal 2 reported that policemen “passed on motorbikes and opened fire while the kids were here talking to us.”

The so-called “Frontline” protesters were unarmed, according to the local television network.

This is the risk they run every day as they take advantage of the evening to shoot at them, injure them and even assassinate them. We continue to insist what we have said all these days of broadcast: if the government, instead of spending that money on intimidating and treating the civilian population as terrorists, had invested that money on negotiating we would have saved a lot of money and we’d have a clear road towards agreement.

Locals initially were relieved when the police began using the Exito as their base of operations on May 19 as they forced the gangs to to back down, multiple neighbors told Canal 2 and investigative journalism website Cuestion Publica.

“I myself brought them coffee and we brought them juice because after they arrived we found ourselves in calm,” one neighbor told Cuestion Publica.

Whether protesters or local gangs opposed the locals cops’ presence was literally blurred by the teargas used against the so-called “Frontline” protesters in Puerto Madera and the fumes of burning tires to smoke our the cops from the Exito, according to the locals.

Around 10PM, the frontline protesters reported that they would retreat as they didn’t want to be associated with people who allegedly had returned to looting.

“Johnny,” a human rights defender, said the Frontline protesters and other locals initially tried to prevent looting, but left when the crowd became too big.

The decision was to withdraw so that neither the First Lines nor the comrades of the resistance would be accused. We went home. The police took advantage of this, seeing that there was no one there, they came to shoot indiscriminately at the people who were inside. Not to capture them for theft, but to shoot and repress them.

A man who asked to be identified as “Zeta” was one of the looters and armed with a revolver as he spoke to Cuestion Publica.

Zeta confirmed that he entered the Exito around 9:30 with other looters. At one point they were surprised by the ESMAD riot police that appeared to have locked the looters in.

According to the looter, the cops made no effort to arrest people, the cops just tortured the looters. Zeta lost consciousness after a cop hit him on the head., he told Cuestion Publica.

Zeta assured that, despite having him on the floor, they did not try to arrest him. When he was able to gather some strength, he ran into a kind of street of (anti)honor – or of horror and torture – made up of members of the police who furiously beat him all over his body. Between the adrenaline and the bruises he lost track of time. He lost track of how long he remained inside these facilities, in this kind of torture center for looters, according to his account.

Zeta escaped the Exito through the main entrance around 11PM. The looter passed out again outside and was brought to safety by friends he had among the Frontline protesters, the looter told Cuestion Publica.

One of the protesters, who asked to be identified as “Doble Rueda,” confirmed he found his neighborhood friend outside of the supermarket after which he heard shots.

A medic, who asked to be identified as “La Tia,” told Cuestion Publica that 13 or 14 looters made it out of the supermarket alive between 10PM and 3AM.

This wounded boy arrived and I started to cry when I saw how they abused him. They hit him in the head, he was beaten to pulp. One girl had all her teeth knocked out. Horrible. It was 3AM and we were sitting there crying from seeing everything that happened.

The medic told that some of the looters never left the Exito that night, which was confirmed by a neighbor.

One of the looters was found a week later “with injuries from a severe beating and a cut on his tongue that prevented him from articulating words,” the local told Cuestion Publica.

The 27-year-old Angie Yohanna Valencia didn’t take part in the looting, but was allegedly shot by a cop as she returned home from a cornershop.

Protesters of the Frontline who were armed with shields tried to save the single mother, but were forced back by the police.

While the cops forced the protesters to retreat, one of them shot Valencia two more times, making sure the woman was dead, according to an eye witness who asked to be called “Estela.”

The videos of the moment after the shots were fired show how upset the young people were to see someone die. Those who tried to do something, the medical brigade, rushed to try to determine if she still had vital signs. When they saw that Angie’s body was lifeless, they returned her to the place where they found her and waited for the arrival of the ambulance that took her to the Carlos Holmes Trujillo hospital.

The supermarket donated $10,000 in coupons to members of the ESMAD riot police unit three days after the incident.

The cop had just received a coupon from the supermarket chain, which decided to donate $10,000 to the police unit that is accused of using excessive force to quell anti-government protests that kicked off on April 28.

In a press release, the National Police said on May 20 that the cops on site were evacuated from the area around the Exito around 8:30PM as they were unarmed and “attacked by a group of people that were crowding in front of the commercial establishment.”

Reinforcements were shot at, according to the police, but able to enter the supermarket to “evacuate” the looters.

The National Police entered this commercial establishment, safeguarding the integrity and life of the people who were inside the place, preventing them from continuing to cause damage to these goods and promptly evacuating them from the site to protect their physical integrity.

The police confirmed the death of Valencia and said that 19 civilians and two policemen were injured. The police announced no arrests and video showed cops weren’t making any effort to arrest alleged looters.

At the request of locals, who told Canal 2 that the police had turned the Exito in a torture center, the reporters returned to the supermarket where they found a large number of cops and armed civilians.

Neighbors reported hearing cries for help, as well as seeing garbage trucks and other vehicles coming and going.

Police told the reporters that Exito executives refused to allow the journalists and human rights officials who were at the supermarket to enter the building.

Cali’s police chief, Colonel Edgar Vega, told local newspaper El Pais that locals’ claims that cops had turned the supermarket in a torture center were “false” and claimed that he had asked the municipal human rights office, the Inspector General’s Office and community leaders to come to the Exito.

It wasn’t until 9PM that evening, however, that a commission of municipal human rights officials, community leaders and Exito representatives were allowed inside the building.

A civilian member of this commission, who also asked to remain anonymous, sent Colombia Reports videos of the inspection that showed traces and one puddle of blood inside the Exito.

The videos also showed evidence of efforts to clean the supermarket.

According to the community representative, “the police won time to clean up.”

The blood and evidence that the Exito had been cleaned that was filmed by the community leader and confirmed by the government official were left out of the formal report, however.

Two days after the inspection, Exito executives and Defense Minister Diego Molano gave members of the ESMAD $10,000 worth in coupons at the supermarket’s headquarters outside Medellin.

The support of the private enterprise for the members of the institution who fulfill our duty so selflessly is fundamental.

Exito CEO Carlos Mario Giraldo stressed that the Cali branch had been the victim of looting on multiple occasions and denied the supermarket had been used as a “torture center’ on May 24.

Grupo Exito categorically denies that the Exito Simon Bolivar was a “torture center”. This store has been the object of multiple thefts and looting that do not respond to the spirit of legitimate and peaceful marches. One cannot use insults to try to turn the victims into alleged victimizers.

Unfortunately for Giraldo, and despite the efforts of La Silla Vacia to censor the scandal on Facebook, all the evidence and multiple witnesses indicate that the Cali Exito branch was the scene of what could be one of the most brutal acts of police violence during the protests.

Evidence also indicates that Colombia’s largest supermarket chain was actively involved in trying to cover up this apparent atrocity.